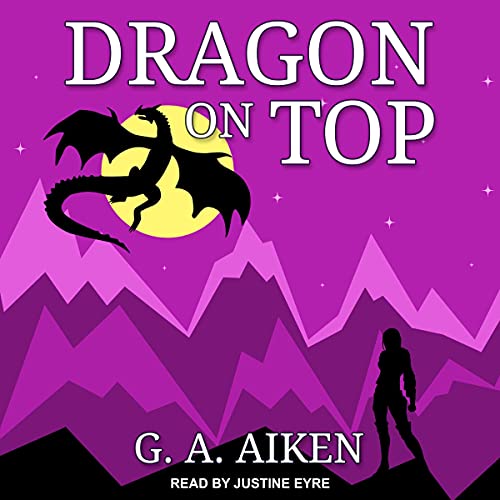 List Price: $13.99
You Save: $1.75 (13%)
By completing your purchase, you agree to Audible’s Conditions Of Use
Sold and delivered by Audible, an Amazon company
Share

4.7 out of 5 stars
4.7 out of 5
273 global ratings
How are ratings calculated?
To calculate the overall star rating and percentage breakdown by star, we don’t use a simple average. Instead, our system considers things like how recent a review is and if the reviewer bought the item on Amazon. It also analyzes reviews to verify trustworthiness.
Top reviews

Red-Haired Ash
5.0 out of 5 stars Ghleanna falls for the bookish Bram
Reviewed in the United States on November 19, 2019
Verified Purchase
Ghleanna the Decimator is ordered by the queen to escort and protect Bram the Merciful on his trip to negotiate peace between the Sand Dragons. While Ghleanna has mostly ignored Bram for all his life, he can’t ignore her. He has been in love with her since he first saw her but it takes this trip for her to actually see him.

I loved these two. Ghleanna is a hardcore warrior who can seem to get anyone to follow her. She was a troublemaker, like most Cadwaldr. Bram may be a negotiator and lover of books but he can still defend himself when he needs to. I really could have used more for this book because these two are so much fun.

I love everything about this world and the characters in it. They are a hoot and I don’t want to stop reading.
Read more
2 people found this helpful
Helpful
Report abuse

Malinda
5.0 out of 5 stars Great story and addition to the series :D
Reviewed in the United States on August 16, 2017
Verified Purchase
4.5-5 stars

This was a great story. I liked both Ghleanna and Bram and enjoyed seeing them get together.

Ghleanna is a dragon shifter that's part of the Cadwaladr Clan. Their clan are mostly warriors and Ghleanna is among the best, even holding the rank of Captain in the Queen's armies. Unfortunately, before her father met her mother, he was a whore of legendary proportions and his reputation caused all his children issues but it seemed to affect Ghleanna more than her siblings.

Bram is a dragon that works as diplomat for the Queen, Rhiannon, and is more scholarly than a fighter. He's currently working on an alliance with a neighboring Kingdom and if it goes through, it will make Rhiannon very powerful.

Rhiannon and her consort, Bercelak (their story is in Chains & Flames which is the second story in the current version of [book:Dragon Actually|3295695]) know that Bram's mission is important and they worry about someone trying to stop the treaty by taking Bram out. Bercelak suggests sending Ghleanna along to make sure he stays safe. Ghleanna isn't too please with "babysitting duty" but does agree to do it. After her last lover screwed her over (in a not nice way) she wasn't looking for anyone new but once Bram is on her radar, she starts seeing the benefits of a non-fighter that could appreciate her.

Bram has actually had a thing for Ghleanna for years but he's not very direct with her about his attraction to her and since the members of the Cadwaladr Clan tend to be a bit oblivious at times, you really have to be direct about what you want. Surprisingly Ghleanna's family gives Bram this and other advise, realizing that he really likes her and is the type of dragon that would treat her right. Since the clan usually gives incoming suitors a hellish time, Bram's acceptance by them without having to run "the gauntlet" is a huge vote of confidence. So Bram, Ghleanna and a few of her siblings/cousins head out on the trip and (as expected) there is trouble that delays their trip. It does give Ghleanna and Bram time to get to know each other and learn to appreciate each other (more on Ghleanna's side than Bram because he was already smitten). They do get through the trouble and things work out well, ending with Bram and Ghleanna starting a HEA together.

I enjoyed this story greatly. I really liked Ghleanna. She wasn't the typical feminine woman and suffered for that (and her father's reputation) which I can understand since I've always been a tomboy and work in a male-dominated industry. And Bram may have been the "milder" of the two because he's a diplomat but he could take charge when it was needed. I liked him, he seemed like a good match for Ghleanna. I really liked the characters and the story was really good and engaging so I'd definitely recommend this story. :)
Read more
3 people found this helpful
Helpful
Report abuse

MonicaMartin41Top Contributor: Fantasy Books
VINE VOICE
5.0 out of 5 stars I want a Bram of my own....
Reviewed in the United States on October 29, 2015
Verified Purchase
I read this a long time ago but bought it as a single release. Its one of my favorites because Bram is so cute and funny. Gives good insight on how Ghleanna and Bram even made it work because they seem like such opposites! She does such an awesome job filling in the gaps of their relationship. Bram and Ghleanna totally mesh because he's so absent minded and has his brain on his work and loses track of time. Then we have Ghleanna who is a warrior dragoness whose career is military and serving the Queen in the army and is away a lot and THAT allows Bram to do his alliances and work. Its a great read and I highly recommend it. I realize some readers get confused with all these different names and the reading orders. Go to her website and check it out. Its completely worth it to read these precious books! I read them over and over. I am SUCH a fan and laugh my ass off every time I read them! I fell in love with all these characters and I can totally picture what they look like and what they do in these crazy scenarios! Don't let the names scare you off...just say their names how you think they are said and move on and enjoy the books. :) This is to help with reading order. http://gaaiken.com/reading-order/
Read more
4 people found this helpful
Helpful
Report abuse

Mela R
5.0 out of 5 stars So funny! But that just might be me.
Reviewed in the United States on June 26, 2018
Verified Purchase
Yes it is erotica. So, that first if you are squeamish. But, I don't get these books for the erotica (which is, when I don't skip over, sometimes very funny too), I get them for the humor, the stories and the characters. Really. When I'm feeling sick or down, I grab one of these books. I'm writing this review for all of them. They are the stories of a world of humans and dragons; and really nasty protagonists, and bad, bad, gods. The underlying story runs throughout the series, so I would really recommend starting from the first book. There are a couple that aren't as good as the rest but that is up to any given fan's taste. There are also some novellas that are just as entertaining.
Read more
One person found this helpful
Helpful
Report abuse

Michelle Simpson
5.0 out of 5 stars Nice novella
Reviewed in the United States on August 26, 2017
Verified Purchase
This was a nice little story. I enjoyed it. I loved getting to see Aileen the Wicked as we hardly ever see him. Which is unfortunate because I really love that character. Ghleanna and Bram's story is one I'd recommend to read after reading most of the others because while technically this books timeline is before the other books timeline, it kind of it gives you a tease of their story in the other books, that is realized in this book. So I would definitely recommend reading this after reading some of the others.

It is an enjoyable book and I would definitely recommend this book to people.
Read more
2 people found this helpful
Helpful
Report abuse

Kindle Customer
4.0 out of 5 stars A go to author for me- Always!!💗
Reviewed in the United States on November 1, 2015
Verified Purchase
I love this series! This author- under either pen name- is a sure buy for me. The sass, family bonds, best dragons I've ever read, sexiness, and the humor are so so Great!!!
Truthfully I only gave it a 4 star for 1 reason:
1. The series jumps back in time after the 4th or 5th book from grown children's love stories to the parents - now young- own love stories. (I love that we get those stories..The problem is it takes a bit to figure that out. )Then the next book jumps back up to the children again, and so forth. It can be confusing which sibling from which era your rooting for.

Over all these Dragons always make me laugh out loud , are sexy, and has a full strong stories.
Read more
5 people found this helpful
Helpful
Report abuse
See all reviews

becky
5.0 out of 5 stars Great read as always
Reviewed in the United Kingdom on March 14, 2017
Verified Purchase
I thought I could skip this as it's only like half a book and there's nothing I hate more than reading a book no more than 200 pages or even 300. Dragon on top is one of the few exceptions it was a lovely story I really enjoyed it the characters are great as always the main story was just as captivating as previous books and we learn all about the water dragons which I'm guessing will pop up through future books so it's definitely worth the read plus it's only £1.64 you can't really go wrong with that price. If your unsure wither to buy this book or not because of its lack of pages don't let it out you off its just as good as all the rest in this series it 100% worth it.
Read more
One person found this helpful
Report abuse

Moose Girl
5.0 out of 5 stars Fabulous
Reviewed in the United Kingdom on April 16, 2016
Verified Purchase
When I started reading this, I couldn't shake the feeling that I've read it before. I think it was part of an anthology somewhere. Still, G.A. Aiken/Shelly Laurenston is one my my favourite authors, so I kept reading anyway.

I loved this book. As always, the characters are amusingly insane. I've always particularly liked the Cadwaladrs. I giggled my way through the book and thoroughly enjoyed it.
Read more
One person found this helpful
Report abuse

sadia
4.0 out of 5 stars Lots of dragons:)
Reviewed in the United Kingdom on October 3, 2016
Verified Purchase
This is the first dragon book I have read. I only read it because it was written by Shelly laurenston under pen name. It is funny, fluid with lots of dragon action.
Read more
Report abuse

Indya
5.0 out of 5 stars loved it.
Reviewed in the United Kingdom on February 5, 2017
Verified Purchase
I have loved all of the author books and it doesn't look like that is going to change anytime soon.
Read more
Report abuse
See all reviews
Back to top
Get to Know Us
Make Money with Us
Amazon Payment Products
Let Us Help You
EnglishChoose a language for shopping. United StatesChoose a country/region for shopping.
© 1996-2021, Amazon.com, Inc. or its affiliates