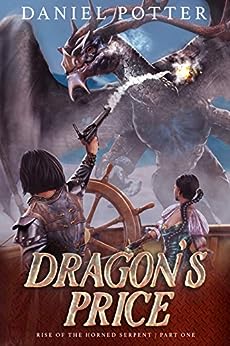 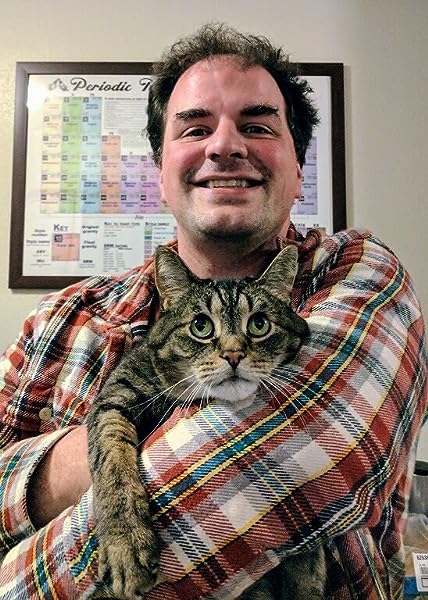 by Daniel Potter (Author) Format: Kindle Edition
Book 1 of 4: Rise of the Horned Serpent
See all formats and editions
Sorry, there was a problem loading this page. Try again.

Ishe likes to confront her problems with her fists—too bad her current problem is a dragon.

Her sister Yaki has always used her looks to get what she wants. But when she is injured, only a deal with the dragon will keep her alive.

Together, these two sisters must escape the dragon or be forced into his service against the only home they have ever known.

Get it now and start the adventure.

DANIEL POTTER writes about creatures that are generally considered highly improbable, from talking cats, flying reptiles made of living metal and people who sprout foot long talons when annoyed. As a biologist he should know better but he’s always ready to leave reality outside if he needs too, no matter how much it scratches at the door. He’s the author of three series, Freelance Familiars, a unique and proper take on urban fantasy from the familiar’s perspective, Rise of the Horned Serpent which is best described as Sky Pirates Versus Dragons, and The Full Moon Medic, where the end of the world is magic.

When he's not chasing his imagination, his imagination is usually chasing him, whether while he's cooking lunch for his spouse, playing video game or fending off two cats who always insist it's dinner time.

4.4 out of 5 stars
4.4 out of 5
27 global ratings
How are ratings calculated?
To calculate the overall star rating and percentage breakdown by star, we don’t use a simple average. Instead, our system considers things like how recent a review is and if the reviewer bought the item on Amazon. It also analyzes reviews to verify trustworthiness.
Top reviews

Kristopher M. Schnee
4.0 out of 5 stars The Better Bits Of Final Fantasy
Reviewed in the United States on May 10, 2019
Verified Purchase
"Dragon's Price: Rise of the Horned Serpent" (by Daniel Potter of "Freelance Familiars") is fantasy, billed as inspired by "Final Fantasy". It has no game elements; it's just high fantasy with airships and dragons and crystals. Specifically, about a sky-pirate crew trying to survive a dragon attack and then escape from the monster's lair; surprisingly that's the entire story in book 1. I did enjoy it though, because it does what the FF games did in their better moments: show us cool stuff with people firing elemental crystal blasts and having airship fights and visiting weird places. In hindsight, FF's actual plots are pretty awful: evil dude wants to conquer the world with crystals but secretly a second evil dude wants to destroy reality, and you have to go kill him by hitting him with swords. Thankfully, "Dragon's Price" does not do that. Instead there's a little dragon-servant society that makes up much of the book's plot, and that was interesting to see. The draconic villain is not just a cardboard monster, has an agenda, and is developing an unusual hidden empire that I'd like to see more of.

Will I buy the second one? Maybe. I'm a little squeamish due to two remarks at the end that seem to say, "The second book is going to be about a bad guy doing creepy mental torture", but maybe I'm misreading it. (I had put down MCA Hogarth's "Even the Wingless" for similar reasons despite liking the writing style and setting.) I can definitely recommend this volume though.
Read more
2 people found this helpful
Helpful
Report abuse

Dave Guilbault
5.0 out of 5 stars A dragon chewed on this book!
Reviewed in the United States on March 8, 2019
Verified Purchase
Remember the very first time you read a book about a dragon? Remember how you were surprised by what happen as you read and turned the pages? Awesome things happened, unexpected things, wonderful things; and you could not put the book down until the end! This is one of those books. Any surprise examples I could give would be spoilers. But we do have a very intelligent dragon, sister heroes, and a quest to begin. I cannot wait until March for the 2nd book.
Read more
8 people found this helpful
Helpful
Report abuse

is this necessary
4.0 out of 5 stars printed on paper!!!!!! Waiting for the others to go into paper print- desperate!
Reviewed in the United States on December 7, 2019
Verified Purchase
Ok story, loved some parts and anxiously looking for others in this series to go into print upon paper!!!!!!!! Why does it take so long to go into print? Not everyone wants/likes to use nor have an e reader. Blah! Need the others in this series on printed paper sooner than later. Story does need some proof reading / editing before going into print.
Read more
One person found this helpful
Helpful
Report abuse

Kindle Customer
4.0 out of 5 stars Imaginative, creative and fun
Reviewed in the United States on March 4, 2019
Verified Purchase
Who can resist sky pirates and dragons? This imaginative story kept my interest from the first page to the last. Mr. Potter delivers twists and a pet spider in this book. While spiders are NOT my normal cup of tea, Blinky is OK . This is well written with only a few grammatical errors that I noticed. Enjoy! I do have to admit that I like his first series a tad bit better.
Read more
One person found this helpful
Helpful
Report abuse

B. R. Bailey
5.0 out of 5 stars good book
Reviewed in the United States on April 27, 2019
Verified Purchase
This was a nice light read that was enjoyable.
Read more
Helpful
Report abuse

Melanie
3.0 out of 5 stars Dragon’s Price
Reviewed in the United States on May 4, 2019
Verified Purchase
A good story line, the proof reading and editing need to be improved. Main characters keep getting mixed up throughout
Read more
Helpful
Report abuse

Kel
4.0 out of 5 stars Action-packed; sky pirates vs. dragons
Reviewed in the United States on September 4, 2019
-Overall Thoughts-
Dragon’s Price is the fast-paced and fairly short first book to the Rise of the Horned Serpent series. The writing is polished and flows well, and the book is action-packed - dropping the reader directly into a battle on an airship on the first page. The pace keeps the story engaging throughout, although it never feels terribly deep and we don’t get a lot of history or development of our characters. This is sky pirates versus dragons, and is primarily a fun, fast, fantasy adventure.

-The World-
There isn’t a ton of worldbuilding fleshed out here, but there are hints of some very interesting history that I expect will be explored further in sequels. There are airships, cuddly giant spiders, sky-pirates, a dragon empire of the past, and elemental crystal-powered weapons, as well as some interesting mythologies of old gods. Much of the worldbuilding is presented to the reader via epigraphs at the beginning of chapters. I feel epigraphs can be risky as they can threaten to break a reader’s immersion or can feel a bit like an infodump, but I enjoyed the majority of these, and found them to be believable parts of the story’s world.

-The Characters-
Ishe and Yaki are twin sisters of the legendary sky pirate Madria, known as the Silver Fox. Ishe, called the Rhino, has been trained to be a fighter and a pirate like her mother. Yaki, called the Flower, has been set aside, kept safe and whole, and trained to be desirable in order to make a profitable marriage. When a full-grown dragon attacks the ship on their way to the city, all plans are off, and the sisters are thrown into a situation neither were trained for when they are captured by the dragon, Yaz-noth.

-Suggested Audience-
Readers looking for a quick, fun adventure should check this one out. If you’re looking for intelligent dragons a bit different from the usual, you’ll be particularly interested in Yaz-noth, I think.

-Rating-
4/5, Dragon’s Price is a well-written and engaging story. Though the characters don’t get a ton of depth or development in this first book, the action keeps the reader interested and invested. Overall a very enjoyable read.
Read more
One person found this helpful
Helpful
Report abuse

Eric Barnett
5.0 out of 5 stars Really fun ride, marrying Fantasy and JRPG
Reviewed in the United States on July 17, 2019
I met Daniel at a Sci-Fy Author's conference last year and he provided me a copy of this book. (Super nice guy btw!). Just finishing Dragon's Price, I was completely drawn in by the world he created. In the span of a shorter book he was able to build an intriguing family dynamic, compelling characters, and a menacing villain. I will definitely be reading the complete trilogy! My one critique would be the ending of the book came more abrupt that I expected, but it left me wanting more....so mission accomplished!
Read more
Helpful
Report abuse
See all reviews

Mr Ian P Birchenough
5.0 out of 5 stars Interesting premise - fascinating story
Reviewed in the United Kingdom on April 23, 2019
Verified Purchase
When their mother tries to cheat her client on a pirate raid his retribution takes their mother, their ship and puts them on a clock. The sisters must undo their mother's mistake or escape the Dragon and its servants.
Read more
Report abuse
See all reviews