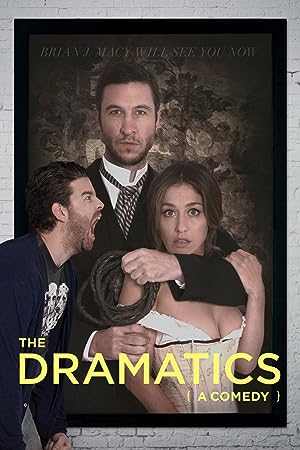 The Dramatics: A Comedy

James E. CookReviewed in the United States on January 14, 2017
5.0 out of 5 stars
One of the best performances ever from Kat Foster and an awesome movie!
Verified purchase
This was an awesome movie and Kat Foster out did herself in this one. I have always admired her as an actress and after watching this performance she truly deserves attention in so many ways that I haven't seen her given by the bigger Entertainment field. If you want a truly compelling and realistic story about some of the things that happen from time to time within the industry then Kat Foster delivered it over and over in this movie with some incredible other actors working opposite of her as well.
The movie itself also was believable from start to finish that sometimes you don't always know what you have when it is right in front of your face, or what direction one should really go. A lot of great things in this movie and if you like drama; this one really packs a punch. Plus again the truly natural beauty of Ms. Foster really shines in this one.
6 people found this helpful

D. A. ShinypennyReviewed in the United States on January 12, 2020
1.0 out of 5 stars
Generic
Verified purchase
The gal was attractive at least. The plot was poorly done and written. The sex scenes were not intimate or funny. They may have tied to do both within them. The camerawork and audio were slightly above home movies. It was one of those movies where you want your time back wasted watching it.

Jack KershawReviewed in the United States on February 9, 2020
4.0 out of 5 stars
Rodgers is a rockstar
Verified purchase
Schreiber? Gold. Rodgers? Classic. Foster? Shined bright like a diamond. Sharp? Delightful, humane, funny and so likable. I’m giving it a 5, because I can’t give it a 4.5 (the ending, though happy, seemed HIGHLY implausible.

Craig HaynesReviewed in the United States on March 3, 2015
3.0 out of 5 stars
So you want to be an actor?
Verified purchase
O.K., so being an actor, isn't a cakewalk. We knew that before "The Dramatics: A Comedy," so melodramatically told us that, but it doesn't hurt to be reminded of it in such a heartwarming, screwball and somewhat zany manner. I like the folks in this film and I like the way in which they have reiterated the truth we all know about show business in general and acting in particular. However, the other underlying truth of acting is: acting/show business has little mercy for those who find someone they care about. Show business creates and destroys more relationships perhaps more than any other business, because its core is based on emotions and emotional connections. More relationships have ended than can be counted because of the immense emotional strain placed on people in the business, even between two folks who KNOW they should be together. To rise above one's ambition, opportunities and career destiny presents herculean challenges and requires great fortitude, which few have in reserve to overcome for very long. It is refreshing to see that there may be a few who do--though they may stumble in and out of it along the way.
2 people found this helpful

Amazon CustomerReviewed in the United States on July 29, 2019
3.0 out of 5 stars
average
Verified purchase
plot ok

EndlessMikeReviewed in the United States on March 13, 2015
3.0 out of 5 stars
Might Have Dug It More If It Had Beed Honestly Marketed
Verified purchase
Much more of a drama than the trailer frames it to be. But a well-done look at a flawed relationship cracking under the real pressures of jealousy. Still funny in parts, but much more of a shoegazer drama than i expected.
4 people found this helpful

Jackie L. AdamsReviewed in the United States on February 20, 2016
4.0 out of 5 stars
Four Stars
Verified purchase
good movie, but you have to wait for it.
One person found this helpful
See all reviews
Back to top
Get to Know Us
Make Money with Us
Amazon Payment Products
Let Us Help You
EnglishChoose a language for shopping. United StatesChoose a country/region for shopping.
© 1996-2021, Amazon.com, Inc. or its affiliates