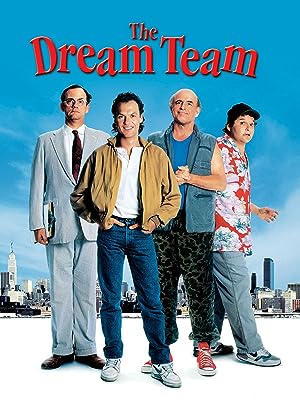 (1,880)
6.51 h 53 min1989PG-13
Michael Keaton and Christopher Lloyd star in this zany, high-energy comedy about four mental patients who get separated from their therapist on the way to a baseball game.

Oddly enough, it wasn’t that well-regarded on its release, but I’ve always found the film charming, Coming off Beetlejuice, Keaton is the ostensible star, and his character’s tethered violence gives the story a mild edge (which it badly needs). He gets the cruder gags and he's just as effective as you would expect.

And yet the real treasure here is Christopher Lloyd, who gives a complex, layered performance that is sometimes sad, sometimes carefully annoying but more often very, very funny.

To be sure, there are cliched elements and it’s going to feel a touch dated in spots — especially toward the end.

But forgive its age. Just give yourself to it for an hour and a half and I think you’ll have a wonderful time.

Mr. RobotReviewed in the United States on April 2, 2022
5.0 out of 5 stars
Such a great underrated comedy
Verified purchase
So many great comedic actors are put into the perfect roles in this film. I can't say why I enjoy it so much, all I can say is the dream team makes me laugh every time I watch it. Over time I also appreciate that this movie would not be the same if written & filmed today, and I don't mean that in a bad way, necessarily. It just seems as though there was a unique naiveté that the late eighties through the nineties had that gave breathing room for tough issues like mental illness to be approached in a fun way without creating "politically correct" issues or making people offended. It is this aspect that can make good films timeless, even if it remains underrated forever.

Nancy C. De YoungReviewed in the United States on July 15, 2021
5.0 out of 5 stars
Great zany comedy!
Verified purchase
My kids loved this movie and it is still better than most being foisted on audiences today! You will be totally entertained watching these superb actors spin their crazy tale of several “ challenged” patients on the loose, in much more danger than they could ever cause on the public. It’s a winner for whole family!
One person found this helpful

Lorrie M.Reviewed in the United States on February 10, 2021
5.0 out of 5 stars
Great movie.
Verified purchase
This is one of our all time favorite movies. The perfect actors were cast for this movie. It’s a great movie and you can’t help but laugh throughout. I don’t think it would have been the same success with any other actors in it.
2 people found this helpful

Wendy in OhioReviewed in the United States on August 16, 2021
1.0 out of 5 stars
DVD does not play in up to date format.
Verified purchase
The DVD would not load into a typical widescreen format nor was the movie in technicolor. It loaded as a small rectangular picture cropped on all four sides onto my television screen. I have reread the sellers product description and all that information was not included in the listing. I am not keeping it in my DVD Library, nor am I returning it. It is going into my trash where all junk mail eventually ends up.

Jo A. CooperReviewed in the United States on July 22, 2015
4.0 out of 5 stars
An unusual comedic perspective on somewhat mild personality disorders
Verified purchase
It's a potentially hilarious concept - this group therapy troupe going to the city with their psychotherapist to see a baseball game. The situations that ensue are amusing. I found myself laughing aloud at several points during the movie. But the shifting "leadership" was a bit confusing. Heart-warming ending. Michael Keaton's performance was outstanding, partly because it's the "juiciest" a real opportunity to show his many strengths as an actor. I found myself drifting away a few times as the flow of the story began to drag somewhat. I think I would say this is a humorous character study, with a bit of suspense included. I would probably watch it again with someone else so I could chat about it after. I'm glad I took the time to watch it.
5 people found this helpful

Faith Shelby mackReviewed in the United States on December 11, 2017
5.0 out of 5 stars
You can understand a lot.
Verified purchase
I love it I had recorded it off the tv and put it away well it had been over five years I decided to watch it in the past 2 years I had worn it out and I ordered it. The acting like mental patience is done uniquely very exceptional . Im dealing with something like that witb my son but with the shouting out part. Would have put this movie over the top. Never the less it's a must see. All praises due to the most high peace. FM mack
2 people found this helpful
See all reviews
Back to top
Get to Know Us
Make Money with Us
Amazon Payment Products
Let Us Help You
EnglishChoose a language for shopping. United StatesChoose a country/region for shopping.
© 1996-2022, Amazon.com, Inc. or its affiliates