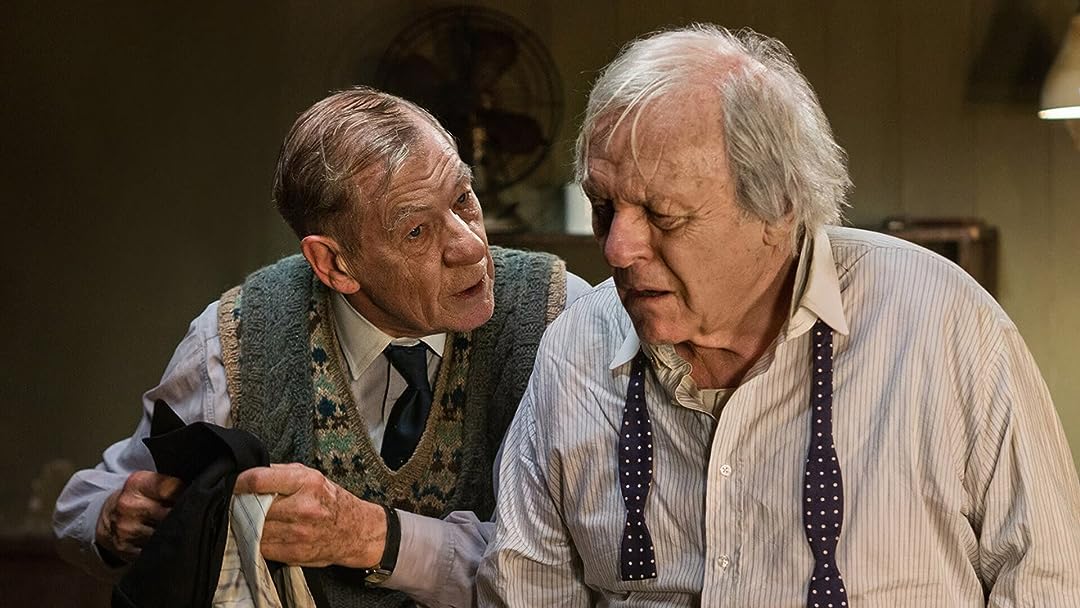 (208)
6.71 h 49 min201616+
In this wickedly funny and moving story, Sir reflects on his accomplishments and seeks to reconcile his turbulent friendships with those in his employ before the final curtain.

Margaret AndersonReviewed in the United States on June 10, 2018
5.0 out of 5 stars
These two couldn't miss
Verified purchase
I normally watch comedy or feel-good happy-ending movies (escapism). But with two of the finest British actors ever, I had to watch this movie. Amazon's teaser describes it as "wickedly funny and moving," but having seen the stage play years ago, I expected it to be more moving than funny, at least for me, and it was.
McKellen is such a master at finding a fresh way to portray a character that still feels right, still feels like the character you've seen or read about before, only better, more multi-dimensional, but never overdone. The most diverse actor I can think of, McKellen can play anything from a clock (Beauty and the Beast) to a murderer (DaVinci Code). Here, there's a lot of diversity in one role, Norman. He pampers and cajoles his actor/boss, "Sir," like a nursemaid. He threatens a young woman with violence and blackmail in order to protect Sir. Norman suffers so much pain because he wanted to act, but was never given the chance. He lives through Sir, grabbing a crumb of fulfillment here and there, as by his ability to recite any line in any Shakespearian play when Sir needs reminding. Yet Norman is insecure about making a simple pre-curtain announcement to the audience. In my opinion, Norman rivals Dickens' character Bradley Headstone for pathos, and is ideal for someone of McKellen's talent.
Hopkins' Sir is 500% convincing as a man who is self-centered to the point of sociopathy. And now, the sociopath has dementia on top of it all! (And I wasn't just convinced because, sometimes, I looked at Sir's and saw Hannibal Lecter.) You don't like Sir, he infuriates you, yet you still feel sorry for him.
The supporting actors are superb. I'd write more about them, but this is too long already.

Scotspiration™Reviewed in the United States on September 25, 2021
4.0 out of 5 stars
Parallel plot makes The Dresser a clever literary piece
Verified purchase
Superb cast of characters that engage in a parallel plot structure whereby Anthony Hopkin's "Sir" shadows the life of King Lear while completing his 227th performance of Shakespeare's Lear. Supporting characters adopt the traits and personalities of Lear's court and family in Shakespeare's play. The playwright hints that "Sir's" bipolar disorder might not be naturally acquired but rather caused by having subsumed his entire adult life in the role of Lear so severely that "Sir" could no longer detach from it. Fascinating and clever, each supporting character brilliantly mirrors the social constructs between King Lear's daughters and contemporaries/protagonists. Each experiences the consequential tragedies including the "storm" which was duplicated in "Sir's" life by the earth-shattering bombing during air raids (story is set in WWII Britain) that sent "Sir" fleeing to the streets in panic and mental breakdown. Concluding the most powerful performance of his career, "Sir's" life abruptly ends from exhaustion/heart attack after his fierce "battle" to soldier on the legacy of his theater group's Lear. This is a five star performance. Four stars were applied because the acoustics of the audio were sometimes difficult to hear.

johnkenrickReviewed in the United States on June 5, 2020
4.0 out of 5 stars
Two dazzling actors
Verified purchase
I have loved The Dresser in its original Broadway and screen versions. As a longtime fan of Ian McKellan and Anthony Hopkins, I was so looking forward to seeing this new tv production. I was not entirely delighted. The scenes between the two leads make up much of the play, and those are excellent. Hopkins in particular gives a powerhouse performance. But McKellan seems to be trying hard to not be original star Tom Courtnay, and consequently falls surprisingly flat. But then he turns around and does something brilliant. Uneven, but as someone who loves this material, I know that while nothing for me eclipses the film version, this production is worth having.
2 people found this helpful

A Southern Fish &#34;Todd&#34;Reviewed in the United States on August 5, 2020
3.0 out of 5 stars
Worth a viewing, but lacks punch of 1983 original
Verified purchase
It would seem that Ian McKellen and Anthony Hopkins approached these roles determined to give more subdued, grounded performances than their counterparts Courtenay and Finney and the result is a much more subdued film lacking the power of its predecessor. The brilliance of the 1983 version is that it is pure melodrama with flashy, even overwrought performances at times and yet somehow it all fits into the subject matter and leaves one moved and even crushed by its devastating conclusion. Despite all the character flaws, you like, and are entertained and invested in both men. In this version, I found both characters to be less likable and less involving than their 1983 counterparts.

Hopkins is always watchable and his language is beautiful, but aside from his first scene which is quite interesting, I found the performance to be somewhat flat. Where are the remnants of the great man here? To be an actor/manager of the old school, someone who bridged turn of the century acting and the modern age was to be an incredible figure. In the play and the original film, everyone has a level of respect and even awe of the man which seems to be stripped away here. At one point this man was a titan, if perhaps a smaller titan than he imagines. When Sir is in command he is an inspiring presence not to be questioned, I never really see that from Hopkins. Instead of battling back and forth between despair/rage and brilliance/control, Hopkins seems to be circling the drain from the beginning and never really comes up for air. I also think his Lear moments on stage are a limp affair compared to Finney who keeps the grand acting style that Sir would almost certainly have possessed and who goes for every moment on stage as if it is truly his last.

McKellen is more interesting, he makes a number of subtle choices for Norman and sticks with them, always consistent. McKellen is always fascinating to watch but the ultimate effect of his Norman is one that is much more calculating, less emotional, more condescending and ultimately harder to like and empathize with. Conversely, Courtenay is a basket of emotions, more spontaneous, yes, he is manipulative and selfish at times, but you never doubt his heart. Neither role is served by some of the cuts to the script, particularly between the two men, several of my favorite lines are cut. The direction also does the production few favors especially the slow motion/sound distorted scenes and the awkward cutting/montage after the storm scene.

There is one great improvement of this version over the original however -- the great supporting cast which is almost better in every role compared to the 1983 version. Part of this is that the original version cut big chunks of the play from the supporting players (especially her Ladyship). Emily Watson's performance shines above the original portraying a much stronger and forceful character. Sarah Lancashire is also excellent as Madge but the five-star performance of the whole production is Edward Fox as Thornton who steals the show in just a couple of scenes. His monologue near the end is the great reward of this production. The movie is worth it just for him.

Geri AReviewed in the United States on August 8, 2021
4.0 out of 5 stars
Comedy? If so a very dark one. Ian McKellen gave a scene stealing performance......
Verified purchase
.....tough to do when your co-star is, yet another great, Anthony Hopkins! It's mainly a two man show, with extras in & out.

If your looking for a funny haha comedy, this is not it! I don't understand how Amazon could describe/categorize it as a Comedy in the first place.

Regardless, anything with Ian McKellen and Anthony Hopkins as then two principal actors is a treat! I'd watch 😍 them reading the phonebook at each other! LOL😁

RavelaReviewed in the United States on July 28, 2020
5.0 out of 5 stars
A feast to eyes, mind & soul
Verified purchase
It was a such a joy to watch this movie and I admit that it will take multiple views to grasp multiple dimensions of acting and the story telling. All the leading actors brought depths of human emotions to the screen for our joy, raised our intellectual & emotional curiosity and gives an opportunity to introspect ourselves because anyone of us can be facing that state of life. Simply put, I am not sure I am even qualified to write a review for such great movie like this. I just want just want to encourage others to give it a try to experience this unique cinema making.

RaReviewed in the United States on February 4, 2018
5.0 out of 5 stars
Brilliant film, and performances.
Verified purchase
A wonderful film with brilliant performances all around, especially Anthony and Ian. I was very excited to see these two old gents together and opposite each other, two amazing actors of the classically trained variety. Watching these two masters was pure cinematic ecstasy for me. Serious at times, at times sad, and full of very funny moments besides all that. Absolutely worth a watch if you can appreciate acting as an art form without seizure inducing special effects and such.
One person found this helpful

kmkr6Reviewed in the United States on November 24, 2021
5.0 out of 5 stars
No Other 'Dresser' Quite Succeeds
Verified purchase
Fabulously well-acted, actors-as-auteurs, & well-told, due to it: hence, this one, is the 'shakespearean-catapult,' b/c it is truly 'Character-driven.'
See all reviews
Back to top
Get to Know Us
Make Money with Us
Amazon Payment Products
Let Us Help You
EnglishChoose a language for shopping. United StatesChoose a country/region for shopping.
© 1996-2022, Amazon.com, Inc. or its affiliates