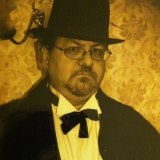 Drew Dunlap spends each workday trying to debug financial software. But in the evenings, he lets the creative side of his brain run rampant. If he is not lost in the worlds of television, movies, books or video games, he is probably crawling around a stranger’s basement looking for something paranormal. And when all else fails to distract him (including his wonderful children Trevor and Lydia), he writes. While still new to Steampunk as it relates to writing, he is a longtime fan of Poe and Lovecraft, the later being a direct inspiration for “Patterns”. When the idea for a Steampunk / Horror anthology was his mind, Drew’s thoughts went directly to Lovecraft. The blending of the physical elements of Steampunk and Lovecraft (Drew refers to it as Steamcraft) is nothing new to the world of fiction; the combination of gearboxes and tentacles is a proven winner. But there needed to be an element of that entity which is at the root of fear – the unknown. Is the protagonist mad or does he see something to which we are all blind? “Patterns” asks the question but it is for the reader to decide the answer. 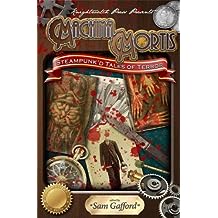 Machina Mortis: Steampunk'd Tales of Terror Mar 28, 2013
by Theresa Derwin, Drew Dunlap, Salena Moffat, Scott M Baker, Buck Weiss, A J Sikes, Marie Andrews, Tonia Brown, Nathan Robinson, Sam Gafford
( 5 )
$3.49
Within these pages you will find many different aspects of the horrific side of Steampunk. In “Last Flight of the Bismarck” by Scott Baker, the world is threatened by technological zombies with only two young adventurers standing in their way. The threat is more subliminal in Salena Moffat’s “Bedlam” where it’s hard to determine what is reality? “The Thumping in the Basement” by Tonia Brown considers the matter of limb and organ replacement and the ethics, or lack of, behind it.
Stories like Marie Andrews’ “Clockwork Carousel” take us to new realms of horror. I dare anyone to look at a circus carousel the same way after reading this unnerving tale. Victorian settings are used in two very different tales. “Whitechapel Transfer” by Theresa Derwin connects the hideous crimes of Jack the Ripper with futuristic Steampunkish technology while “The Garretton Ghoul” by Christine Morgan finds another community rocked by a series of mysterious and gruesome murders.
Buck Weiss contributes a terror filled adventure in “The Black Banshee” that features two amateur sleuths of which I am sure we will read more about soon. So too is A. J. Sikes’ tale, “The Three Blind Men”, which sets the stage for more tales of technological terror. Taking us into the future is Nathan Robinson with “The Last of the Bad Few” which gives a different spin to the technological horror of Steampunk. And, as a contrast, “Nothing but a Dog: A Trio of Travellers Tale” by Travis Sivart brings us back to an Old-World European view of horror… with a dash of Steampunk added for good measure.
These stories represent an ability to look beyond a genre’s preconceptions and create new horizons. These writers are explorers in a wild, new land and, before us, they lay a vast vista of exciting, and terrifying, possibilities.
Read more
Other Formats: Paperback