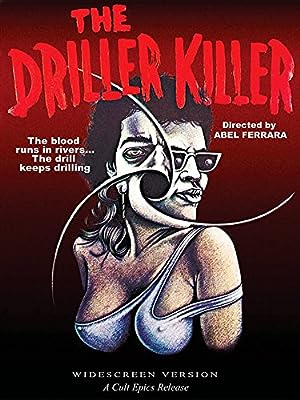 (206)
5.11 h 34 min197918+
An artist slowly goes insane while struggling to pay his bills, work on his paintings, and care for his two female roommates, which leads him taking to the streets of New York after dark and randomly killing derelicts with a power drill. Special Features: - Digitally Restored Color - Digitally remastered picture and sound

The DeuceReviewed in the United States on January 13, 2018
5.0 out of 5 stars
Abel Ferrara Has Dangerous Art Damage for Us
Verified purchase
I first saw this film when I was a much younger man, and I gotta confess, it didn't do a lot for me. The plot didn't seem all that coherent and the actors were just too neurotic and, well, real.

Well, like the mighty UFO once sang, "oh how the times have changed"...

Somewhere along the way I let my taste in film genre off of it's leash one day and the dang thing went wild. You know when a Horror film fanatic starts watching Musicals, there's gonna be trouble in the neighborhood, but among many other things, I got interested in the films of this Abel Ferrara guy.

Some of his movies were a challenge, but his style really started to to grow on me. This was a Director who not only took chances, but I believe he did so because he FIRMLY BELIEVED IN HIS VISION and would not allow them to be presented in any other way than what he saw as his art.

So I began to desire a revisit of this early Ferrara effort, and after seeing Ms. 45 awhile back and having my senses knocked sideways over it, I knew another date with The Driller Killer was inevitable. When I heard Arrow Video was planning a Director-Approved Special Edition of it, I started remapping my destiny.

Little did I know what was in store for me. Remember what put me off of the film when I was younger? Those are the very same qualities that I loved about it this time around! Only now I see that THIS IS AN ART FILM which is undoubtedly why I couldn't comprehend it as a Horror film back in the day.

One of the many extras provided here is a documentary called Mulberry St. that still haunts me, and that's only a portion of the treats in store. Now that I own it, I can't imagine living without it, and let's face it, that means a movie (and specifically a Special Edition of that movie) has delivered the goods.

Jeff ChapmanReviewed in the United States on August 24, 2020
3.0 out of 5 stars
Dont Let the Title Fool You
Verified purchase
Despite the exploitation title, this is neither a slasher nor a horror move. Its just a character piece about an New York city artist slowly losing his mind. Yeah the guy eventually kills people with a power drill. But if thats all you're here for you'll be bored. Although it might be worth the watch simply for the look at sleazy, dirty 70s/80s NYC if that interests you.
2 people found this helpful

duffyReviewed in the United States on November 9, 2020
2.0 out of 5 stars
Very dark, morbid
Verified purchase
I knew I was getting into a gritty atmospheric city urban film with this director. I had seen other films by Abel (The Addiction was far better, China Girl, Body Snatchers). I knew this was a video nasty/ exploitation/bloody film before going in, but I assumed it would be an artsy slasher film. Instead it was boring, slow, I was not into the punk music that kept playing and playing and playing, I wonder if it was meant to be a riveting nuisance intentionally to drive the audience mad along with the main character. I gave it two stars b/c the picture quality is wonderful and it was beautiful to see. But bc of my love for Ferrara, I tried very hard to continue watching I was tempted to shut it off. If you want to see great Abel Ferrara films, watch Ms.45 or Fear City, similar era, setting, and they were much more enjoyable. Driller Killer was slow. Though very wet with blood, this film was dry to me.
One person found this helpful

SpleanReviewed in the United States on April 14, 2020
5.0 out of 5 stars
Prime version
Verified purchase
Currently there are 2 versions of the film on Prime:
Rogue is a poopy VHS transfer.
FilmRise is a high quality 16x9 transfer.
Choose wisely.
2 people found this helpful

Michelle ChapmanReviewed in the United States on May 15, 2019
4.0 out of 5 stars
DRILLER KILLER IN 4K!!
Verified purchase
Revisiting this in HD is a definite must for any fan of 70-80's classic horror slasher flicks. The NY playground in these features is the star of the film
One person found this helpful

SpikeReviewed in the United States on April 16, 2016
5.0 out of 5 stars
The Driller Killer
Verified purchase
I bought this dvd cuz i always liked the Driller Killer and wanted to see what this unrated version was. When i first put it in my player i had to select the english version cuz it stars up in another language and gives you options to pick the language you want to watch. Other then that the movie itself was good and tons of gory scenes with a power drill. lol what i gathered of it was a paint artest is trying to complete his masterpiece wile worrying about how to get money to pay the rent. A ridiculous punk band moves into the building he lives at and makes a lot of noise that effects his concentration and he slowly goes over the edge and starts murdering random people on the street, its crazy how no cops are around to catch him. I like this version of the Driller Killer, deffinetly worth a looks see.
One person found this helpful

BreanaReviewed in the United States on November 28, 2018
5.0 out of 5 stars
.
Verified purchase
Great movie, so happy I have it in my collection now. Arrow releases are amazing
See all reviews
Back to top
Get to Know Us
Make Money with Us
Amazon Payment Products
Let Us Help You
EnglishChoose a language for shopping. United StatesChoose a country/region for shopping.
© 1996-2022, Amazon.com, Inc. or its affiliates