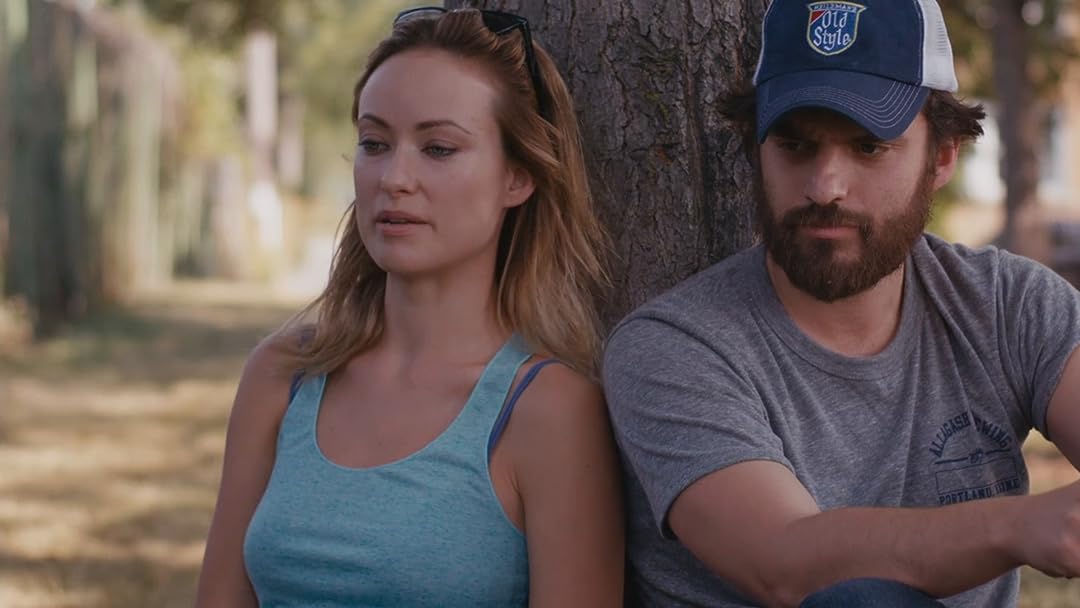 (569)
6.11 h 30 min2013X-RayR
Luke (Jake Johnson) and Kate (Olivia Wilde) are coworkers at a brewery who spend their nights drinking and flirting heavily. One weekend away together with their significant others proves who really belongs together and who doesn't.

Amazon CustomerReviewed in the United States on October 26, 2022
4.0 out of 5 stars
interesting innovative view of young people
Verified purchase
An interesting and innovative sort of film. The writing is fresh and gives the viewer the impression of a lot of ad libbing, but the dialogue seems real, the way people might really act and talk. Heavily character and dialogue driven, just following two main characters and their significant others around for a few days as they go about their lives. You feel like you know the ending but you will be wrong. Excellent acting all around, fine cast, nicely written and directed.
One person found this helpful

Oleg BolotovReviewed in the United States on November 29, 2022
5.0 out of 5 stars
Real Chemistry
Verified purchase
Real chemistry between the actors is a joy to watch.

Dr. Laurence RawReviewed in the United States on September 9, 2014
3.0 out of 5 stars
Penetrating Analysis of People's Inabilities to Communicate
Verified purchase
DRINKING BUDDIES has divided critical opinion since its release in 2013: some reviewers have welcomed Joe Swanberg's film as an honest portrayal of thirtysomething characters and their inabilities to sustain long-lasting relationships; others have berated it for its halting plot-lines, banal dialog and lack of closure.

Although billed as a comedy, the film pulls no punches in its depiction of all four central characters, whose inability to express themselves is palpable. Their frequent use of clichéd phraseology ("great," "awesome,") punctuated with frequent verbal pauses ("um.." "er...") doesn't suggest inarticulateness, but a reluctance to disclose their true feelings, for fear of seeming weak or insecure. The title DRINKING BUDDIES is a suggestive one, for it is within a group situation in a bar, a glass of beer in hand, that sustains at least two of the characters, Kate (Olivia Wilde) and Luke (Jake Johnson). They can either indulge in false bonhomie with their work colleagues, or refrain from talking altogether and play pool instead. Luke tries his best to recreate the same atmosphere wherever he goes; when he and Kate accompany Jill (Anna Kendrick) and Chris (Ron Livingston) on a weekend away in the wilds of Michigan, Luke plays blackjack with Jill and Kate.

When the characters are removed from such situations, however, they are rendered virtually inarticulate. Chris finds it difficult to tell Kate that he wants to break up with her; and even when he does, she refuses to believe him. Jill sits in bed with Luke and tries desperately to persuade him to think seriously about their forthcoming wedding; Luke promises to do so, but we can understand from his body-language that he is simply trying to change the subject. In a climactic scene, Luke helps Jill to move house; when they are finished, they spend the night together. We expect them to fall into one another's arms; but instead they end up having a tiff. Their inarticulateness proves their undoing; imprisoned by their linguistic and emotional hang-ups, they cannot discuss anything in a meaningful way.

Shot on a low-budget without musical accompaniment, Swanberg relies on a series of lengthy shot/reverse shot sequences to reinforce his thematic concerns. The camera lingers on the actors as they cast quick glances at one another, and then look away at something else - a beer glass, a pillow, a picnic hamper, or a picture. The objects within the frame provide them with emotional as well as physical refuge from the (painful) experience of having to understand what their interlocutors feel. They are alienated; just like the viewer, who finds it difficult to sympathize with any of the protagonists.

The film ends on a note of cautious optimism, as Luke and Jill attempt some kind of (silent) reconciliation as they silently eat their lunches in a small room. It is significant, however, that neither of them look directly into one another's eyes; in fact, they consciously avoid what for them is a painful maneuver. As a result we remain skeptical as to whether the two of them will actually make up at all; they seemed to have learned nothing from their previous experiences.

DRINKING BUDDIES is in many ways a painful film to watch, as it lays bare the realities of living in a world whose inhabitants seem so busy that they never have time for one another. It communicates a series of human truths that we would do well to understand.

J and DReviewed in the United States on October 26, 2022
3.0 out of 5 stars
No real ending!
Verified purchase
I usually like these actors but this had no real ending!! I felt like I waited a long time for it and it never really happened! Two fools are in love but NEVER do they speak of it and did he even get married????

rachelanncReviewed in the United States on December 29, 2014
5.0 out of 5 stars
A boozy charmer that can tell us a lot about ourselves
Verified purchase
If you like beer, hanging with the dudes, or even exploring relationship circles told in an effortless way, you’re bound to love “Drinking Buddies.” This quiet little “mumblecore” film packed with all-too-familiar actors is something that epitomizes life as we know it now–as 20 to 30-something year olds in the year 2013. This could be titled a romantic-comedy, though its cool Chicago booziness and hipster-laden culture is too slick and real to mark off into some cliché genre. It’s charming and shaggy at the same time, giving you the feeling that you’re watching your own buddies interact unaware of a film reel going on; it explores some real territories of friendships and relationships you’ve probably witnessed in your own life.

I’m a huge Olivia Wilde fan and this role is definitely a treat to see her in. You get the sense that she’s being her all-natural self with hilarious sense of humor, and the whole cast seems to bask in that territory as well. Director Joe Swanberg, known for his effortlessness in allowing his characters to improvise and seem as natural as possible, doesn’t fail here. This movie perfects in the comic timing and cleverness we can’t get in real life. And Wilde definitely reveals a lot more depth and ambition than mainstream Hollywood would normally permit; we get a real glimpse into any everywoman living under her circumstances.

This is an easy and fun movie to watch, though, with that comes its easiness to neglect the subtle value inherent in it. The characters are written with ease and placed under circumstances familiar to us. It refuses to preach or hit you on the head with ideas or thoughts about relationships, as much more is said about how things would play out as they would in real life–without any of the extra drama or dragged emotions. A slightly off-beat indie-film charmer with a cool alt-rock soundtrack to match, its joy is found in the unspoken but felt feelings that offer us the normality of reality. It’s real and familiar to us, which is what makes this film so great.

To say the least, “Drinking Buddies” makes you realize how charming love and relationships can be when you can be honest to yourself, with yourself, and with others. It seems like a loosely-written script only because the film plays itself out so naturally; it’s hip, charming, but also takes a witty approach through its characters who hide behind their wits and unsaid feelings. This goes great lengths to talk about the day and age we live in–we can’t help but want to love and root for the charmingly flawed characters we see, maybe because we can see a part of ourselves in them too.
5 people found this helpful

drollereReviewed in the United States on August 24, 2013
4.0 out of 5 stars
the givens in mumblecore
Verified purchase
there are givens in movies: the big star never dies, action heroes shoot guns, femme fatales have long hair, there must be a scene in a toilet or bathroom, and you can't show a baby crying for more than 15 seconds. this is a mumblecore movie about four twentysomething people (two couples) so the givens are: they're confused about relationships, friendship matters as much or more than love, they can't complete a sentence without a slaw of particles ("uh", "um", "well", "really", "like", "so", etc.), and they're not full grown adults. they still have the egg tooth they used to hatch out of adolescence. they wear caps to bed, ride bikes to work, stay in other people's houses on the weekend and need friends to move to a new apartment. they flirt around without acknowledging they flirt around. they are good people partly because they don't know how to be bad people. there isn't any real drama, because drugs and guns are not involved and they fight by saying things like "you need to get real with this moment."

so, do you want to watch this movie or not? personally, and i'm medicare age, this took me back to my bartending days in the 70's and how messed up and confused sex and friendship really were. i thought the film was insightful and empathic, mixed humor and honesty, and brought four clever actors together, clever especially in their deadpan comic timing. the story shows you decent ordinary young people struggling with basic adult stuff, which is like watching eight year olds play scrabble. you smile, you want to help them out, but you can't. it's their game, and they have to work it all out for themselves.
148 people found this helpful

joel wingReviewed in the United States on October 2, 2022
2.0 out of 5 stars
Dragged things out too much
Verified purchase
Drinking Buddies is about how relationships can get complicated. Jack Johnson and Anna Kendrick are one couple and Ron Livingston and Olivia Wilde are another. Johnson and Wilde want to be together and Kendrick and Livingston want to see each other as well. This was a good premise but the problem was they dragged everything out. I kept asking when was someone going to make a move. It just got me frustrated after a while. You can only play with sexual and emotional frustration for so long.

Sue PReviewed in the United States on November 4, 2022
2.0 out of 5 stars
boring and sad
Verified purchase
you don't get to know anyone. so there's no reason to care. it appropriately had no ending.
it's bland so you can project yourself and imagine it's deep if you're into that kind of thing.
See all reviews
Back to top
Get to Know Us
Make Money with Us
Amazon Payment Products
Let Us Help You
EnglishChoose a language for shopping. United StatesChoose a country/region for shopping.
© 1996-2022, Amazon.com, Inc. or its affiliates