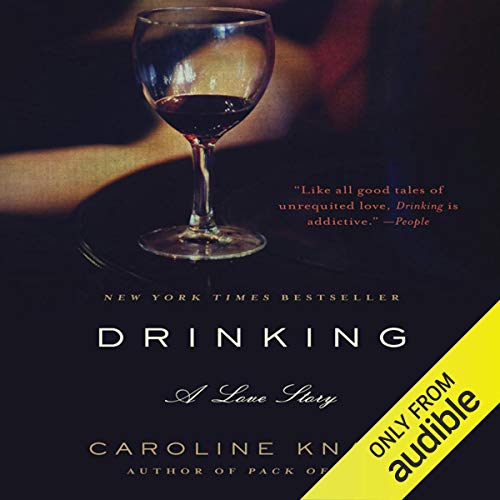 List Price: $17.00
You Save: $1.01 (6%)
By completing your purchase, you agree to Audible’s Conditions Of Use
Sold and delivered by Audible, an Amazon company
Share

4.5 out of 5 stars
4.5 out of 5
1,312 global ratings
How are ratings calculated?
To calculate the overall star rating and percentage breakdown by star, we don’t use a simple average. Instead, our system considers things like how recent a review is and if the reviewer bought the item on Amazon. It also analyzes reviews to verify trustworthiness.
Top reviews

Dr. Wu
5.0 out of 5 stars Do you love a crisp Sauvignon Blanc?
Reviewed in the United States on September 4, 2017
Verified Purchase
Do you love a crisp Sauvignon Blanc? Know what goes best with Risotto? Enjoy Mimosas for weekend breakfasts? Bloodies at sundown on the deck of the Hunter 380? G&T's in the afternoon? Think VSOP Hennessy is the only civilized cognac? Believe it's always five o'clock somewhere? Congratulations, You may be a sophisticated functional alcoholic. As was Caroline Knapp for twenty years until she finally came to her senses and realized that she and her well-heeled family and friends were essentially drug addicts. The drug of choice was alcohol: legal, mass marketed, promoted to be the mark of sophistication."Holding one's liquor" was a test of maturity and distinction. It's ethanol and flavored water. It's addictive, and destroys careers, livers and lives. But it's a drug that makes corporations wealthy, and many are led to the slaughter to fill those coffers. Read her book, and a take long, objective look at the love of alcohol in a strong, clear light.
Read more
91 people found this helpful
Helpful
Report abuse

dawnm90
5.0 out of 5 stars One of the best books about a functioning alcoholic!
Reviewed in the United States on December 29, 2015
Verified Purchase
This is one of my favorite autobiographies. It really hit home for me. It made me look at my own drinking through another person's eyes. Caroline Knapp was a high bottom drunk and I could relate to that. She was high functioning. She was from Boston and wrote for the Boston Phoenix back in the day. No job losses, no messy scenes. But, oh, the feelings! Her description of how drinking felt like going into a room and pulling down the shades really reverberated with me. It's a great read. It's not preachy and it's entertaining. I usually struggle to get through non-fiction books, but I loved this one. It's one of those books I keep recommending. It's just a shame Caroline Knapp is no longer alive to write more wonderful books. Loved this book.
Read more
76 people found this helpful
Helpful
Report abuse

AWR
4.0 out of 5 stars Hugely insightful and artfully written
Reviewed in the United States on August 23, 2017
Verified Purchase
A brutal look at the horrible negative spiral alcohol can induce people to drain into. Knapp artfully and eloquently describes her descent into hell and the confused, bewildered state of mind which the true alcoholic lives in. While her relationship struggles are extremely demeaning and sometimes repetitive, anyone who has been down this road will identify with the long drawn out nature of the relationship issues which are caused by the active alcoholic.

Many of us alkies have wondered if we drank because we had problems or we had problems because we drank. While I believe it's a little of both, Knapp makes a good case for the use of alcohol being the bedrock and origin of the secrecy and dishonesty which becomes completely interwoven with the negative end results alkies put themselves and others through.

I thought the material covering her parents was a little overdone and long, but there is a lot to be gleaned from their difficulties, which so severely affected the author. I've read the book twice and gleaned different things from it the second time around. Very worthwhile.
Read more
34 people found this helpful
Helpful
Report abuse

4RunnerBlues
5.0 out of 5 stars Honest account of addiction and recovery
Reviewed in the United States on October 25, 2017
Verified Purchase
I literally read this book on my iPhone because I could not put put it down, and my phone was most convenient during the day. The author describes her own experience of the darkest corners of her disease and her recovery from alcoholism. Recommended to all whose lives have been touched by addiction, which is likely 90+ percent of those reading this review. Very readable.
Read more
27 people found this helpful
Helpful
Report abuse

Franklin the Mouse
4.0 out of 5 stars The Liquid Security Blanket
Reviewed in the United States on May 17, 2015
Verified Purchase
Towards the end of the book, the late Ms. Knapp remarks, "We live in an alcohol-saturated world; it's simply impossible to avoid the stuff." No kidding. I gave up drinking hard liquor in college back in the early 1980s because I drank it like it was water. Alcoholism runs in our extended family, and its affect on me was frightening as hell. After twenty years of not touching hard stuff, the bar in a hotel that my wife and two sons were staying had all-you-can-drink-free special for hotel guests. I thought, "What the hell." and drank three, very strong, large Tequila Sunrises in less than fifteen minutes. I would've drank more, but my caring wife brought it to my attention what was happening when I was half way through the third drink. Twenty friggin' years without a drop of hard liquor and here came the Caca Express to Liquored Oblivion. It was so easy to rationalize taking the drink and it was even easier to lose control. Never again.

Unfortunately, Ms. Knapp's life took a darker path. Her memoir does give little snippets of alcoholism trivia, but it primarily describes her gradual descent into drinking hell. There is a little questionnaire on page 121 of the paperback edition that you may find helpful. Mercy, not only could this lady drink but she also was one heck of a writer. Despite being very intelligent and doing well in the business world, the author's life was a mess due to alcohol. Ms. Knapp was brutally sincere in her presentation, but her massive insecurities that permeate the memoir were getting on my nerves near the end of the story. My tolerance for reading about someone's self-destructive nature seems to be about 200 pages before I have visions of wanting to slap some sense into the author. For a career woman, she certainly didn't have a feminist mind-set. She allowed alcohol to be her excuse for rationalizing some pretty nasty, narcissistic actions. Despite the author's eloquent, cogent account, it's still difficult for me to see how someone could hide liquor bottles so they could sneak shots or drink practically every day and NOT think they have a major problem. I guess we humans can rationalize doing anything.

I've talked with quite a few people over the years whose lives had been messed up because of alcohol. Some clearly saw that liquor was not an escape from their problems but actually contributed to their difficulties; others still live in denial. Drug use has been a part of civilization since cavemen probably ate fermented fruit. It'll never go away. The stuff is so prevalent, celebrated, and legions of people use it to self-medicate. Of course, the same could be said about hoovering junk food. 'Drinking: A Love Story' has smatterings of humor, but more often are events that felt like I was punched in the gut. The story about her half-brother Wicky made me nauseous. The major thing that helped me by reading Ms. Knapp's memoir was realizing that many stories people have told me or I've read over the years seemed very illogical in their actions but could be explained if liquor was involved. It never dawned on me to think of it in that way. It's breathtaking to consider how often alcohol is involved when issues such as date rape, murder, destroyed marriages, theft, and whatnot are the issue. You may find that Ms. Knapp's trials and tribulations will resonate for you and help you take the first steps towards living a better, happier life. That would be priceless. The book is never boring.
Read more
54 people found this helpful
Helpful
Report abuse

smt4242
5.0 out of 5 stars Excellent writing
Reviewed in the United States on January 28, 2019
Verified Purchase
Caroline Knapp (RIP) exposes so much internal turmoil in an incredibly elegant writing style. I found myself reading and rereading passages because they were so poignant to my own feelings and life.
She speaks broadly but directly on drinkers, and women, and you may come out understanding more about how her generation of women and drinkers at the very least. I believe it’s more than that and the experiences she describes are relatable.
If you’re a woman, know any women, like drinking, or don’t drink, read this book.
Read more
7 people found this helpful
Helpful
Report abuse
See all reviews

Brendan Ray Cyrus
5.0 out of 5 stars The Truth
Reviewed in the United Kingdom on April 30, 2018
Verified Purchase
An honest account of a life of misery for someonw who is a slave to alcohol.
'I wanted to drink for precisely the same reason that I didn’t want to drink – because I had a drinking problem. Drink seemed to have a strange, brain-sucking power over me.'
'.... there is a fine line between problem drinking and full-on alcoholism, but that, as a drinker, you never see it. You cross it without knowing you’re crossing it.'
Read more
10 people found this helpful
Report abuse

m
5.0 out of 5 stars A must read
Reviewed in the United Kingdom on September 3, 2020
Verified Purchase
This is a book we have purchased many times to help people that have problems with alcohol. A close family member is a sober alcoholic and this is the book he found most helpful when achieving sobriety 23 years ago, so it is worth a shot for anyone that is in a similar position - he almost died and still drank again before something just clicked and he stopped. It doesn’t work with everyone, but the story and message is a good one and it will at least put one of the building blocks in place that may ultimately help achieve sobriety or at least a reduction in the quantity consumed.
Read more
3 people found this helpful
Report abuse

Tonia Bastable
5.0 out of 5 stars Powerful Identification
Reviewed in the United Kingdom on September 18, 2019
Verified Purchase
Wow! Very powerful book to read if you are or have been in the madness of addiction or alcoholism. True identity in every chapter and gives hope that there is a solution 😊
Read more
4 people found this helpful
Report abuse

Jen
5.0 out of 5 stars An eye opener. I loved her brutal honesty
Reviewed in the United Kingdom on March 26, 2016
Verified Purchase
Really enjoyed this book. Makes you realise that there are so many people living the same way, and are alcohol dependent. It's sad to know she died so young, but i hope she has helped many others with the publication of this book, and her brutal honesty. A great gift for anyone you may have concerns about their drinking, as it makes you stop and question your own intake.
Read more
5 people found this helpful
Report abuse