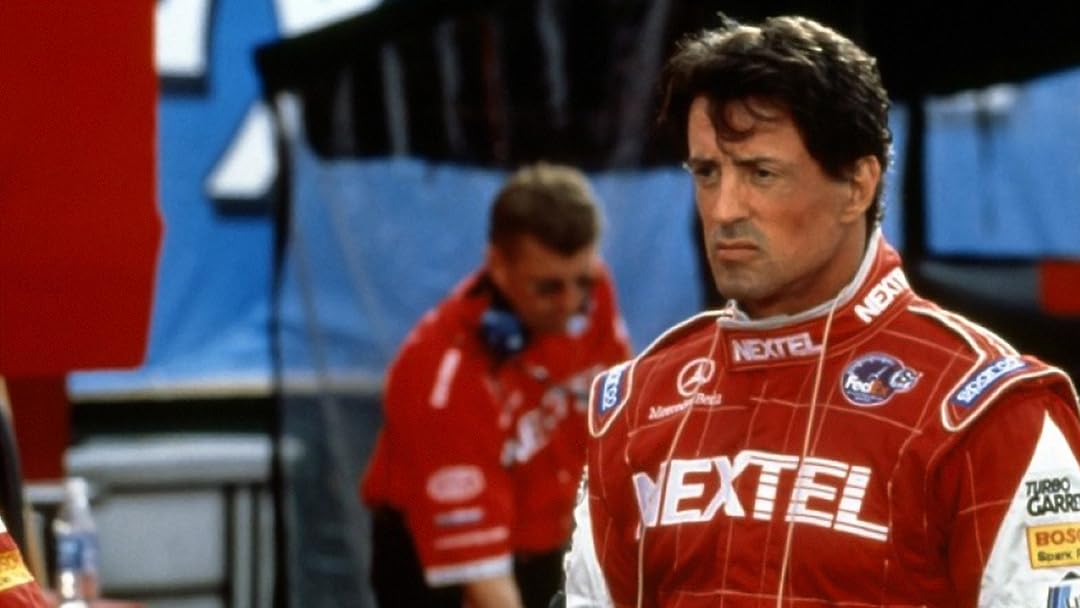 (2,569)
4.61 h 57 min2001X-RayPG-13
Talented rookie race-car driver Jimmy Bly (Kip Pardue) has started losing his focus and begins to slip in the race rankings. It's no wonder, with the immense pressure being shoveled on him by his overly ambitious promoter brother as well as Bly's romance with his arch rival's girlfriend Sophia. With much riding on Bly, car owner Carl Henry (Burt Reynolds) brings former racing star Joe Tanto (Sy..

Amazon CustomerReviewed in the United States on January 29, 2019
1.0 out of 5 stars
For your own mental health skip this bomb
Verified purchase
Of all the cheesy and ego-driven stuff Stallone has ever done this one takes the checkered flag. For racing fans, you would think they could have included some cool or at least interesting photography (and I would have settled at a minimum) but nope. As for the plot and its 'complications', including events in the races, any real fan with the most basic knowledge could tell you none of it was plausible, or possible, and I believe that would hold even for those who have never seen a race in their life. In fact I was amazed that ol' Sly would associate himself with such an amateur and wholly unrealistic representation of this great sport- the only way I can explain it is that it's an actual representation for how his ego-addled mind sees the world in general, and believe me, that's sad. What I recommend is that you watch it for yourself as an example of how NOT to make a thrilling movie about racing, and if there were any way to award it negative stars I'd bestow negative five as I think it may actually be the very worst movie of ALL TIME... But, you know, you're free to come to your own conclusions...
15 people found this helpful

rglaredoReviewed in the United States on October 22, 2020
5.0 out of 5 stars
One of the best Stallone movies that almost none knows about !
Verified purchase
I like this movie because it shows how really great an actor Stallone is. He needed to make more movies like this. I always thought a second part was needed to finish his character storyline. So many open questions. If someone has or there is a book about this movie please tell me.
3 people found this helpful

Ben30Reviewed in the United States on July 17, 2015
3.0 out of 5 stars
EXACTLY THE SAME CONTENT AS THE DVD VERSION, IT JUST HAS NEW HD TRANSFER THAT'S ALL
Verified purchase
One of stallone's most average films is about Car racing
with the screenplay written by sylvester stallone & Directed by Renny Harlin
the film turns out to be entertaining at best, the screenplay is Good but not excellent
i can say that the Car racing scenes are Directed brilliantly, Great work from Renny Harlin for sure
so Good screenplay but the Directing is better, brilliant infact
Burt reynolds Gives a Great performance aswell

well Warner bros has finally released this film on blu-ray with a new HD transfer
which does look very sharp & clear picture quality in 2:40:1 widescreen plus a new 5.1 master audio mix
so the picture & sound quality is much much better than the old dvd version for sure
about the special features
there are no new extras that's for sure, i would've been surprised if WB got a new interview with Sly or Renny Harlin about this film
all the same extras from the very old dvd release have been carried over that's all
which are Behind the scenes featurettes-
MAKING OF DRIVEN, CONQUERING SPEED THROUGH LIVE ACTION & VISUAL EFFECTS
plus DELETED SCENES with optional commentary by Sylvester stallone
there's about 51mins of Deleted scenes that are given new HD transfers which i've checked out
and found out when watching them that some of these scenes could've been left in the film to make the storyline more interesting actually
i guess Sylvester was having alot of Arguments with the Warner bros executives about the film's very long runtime
so 51mins had to be cut out of the finally film version
the Theatrical cut goes for 117mins so maybe another 20mins of scenes would've been better for the storyline
there's also the usual DVD commentary from Renny Harlin aswell

so the only difference is the new HD transfer & 5.1 master mix, both the dvd & blu-ray have the same special features
so either buy the new blu-ray for much better picture quality or stay with the old dvd version
maybe 3 stars for the film, 3 stars for the blu-ray

wraithReviewed in the United States on April 20, 2021
2.0 out of 5 stars
Alright Racing Movie
Verified purchase
This is an ok popcorn flick. If you're a racing fan, you're going to have to suspend belief some for this one. The movie's point system is messed up. Bly would never have been in contention at the last race if they actually went by a real points system. If you're not a racing fan, spectacular crashes are a rarity in Indy car. I can understand why Stallone made this movie with him being a racing fan. This was made at the height of Indy Car before Nascar pretty much took over in the U.S. So it was made before Indy Car before it split into two leagues. I think Stallone could've dropped the bit with the ex-wife and the girl chasing completely and just focused on the drivers and racing. I think it would've been a much better movie. The romance pieces didn't need to be there and did nothing to advance the other characters or contribute to the plot. It seemed just thrown in. If you want just a popcorn flick to pass this time then check this one out.
One person found this helpful

AnonReviewed in the United States on May 4, 2021
1.0 out of 5 stars
It's unbelievable
Verified purchase
...that this crap has any stars at all. It just drones on and on. The soundtrack has got to be one of the most ridiculous amalgamations ever featured in a film. "It can't be that bad, it's got Stallone in it." <<IT IS THAT BAD!!!>>

It starts out bad and never gets so bad that you have to turn it off which makes it the worst kind of bad- just tolerable enough to waste your time. It doesn't ever get better- it just loiters right on the rim between trash and garbage.
2 people found this helpful

CJReviewed in the United States on May 1, 2021
1.0 out of 5 stars
Unlikeable Characters + Poor Writing
Verified purchase
Don't watch this movie. There are maybe two redeemable characters in it. The individual who the movie ultimately wants you to cheer for is /the/ most unlikable character, and the ending was hardly warranted. There are character arcs but it's all just garbage. Literally, you go down the list of characters in this movie and they're all trash individuals and I'd go through every one just to tell you why they're trash but then I'd probably be giving spoilers away, which I should anyway since you shouldn't watch this movie. Buy it if you want to, but don't be surprised by any disappointment that follows such a purchase.
One person found this helpful

AbedsbrotherReviewed in the United States on September 4, 2011
2.0 out of 5 stars
There's a Good Film in Here Somewhere...
Verified purchase
...but it can be hard to find sometimes. I remember, when it first appeared in theaters, some friends called it "Rocky on wheels." That, it definitely is not. More of Stallone's story filtered through in Rocky. Here, I have the impression that half of the story was jettisoned for "slowing down the action."

For there is plenty of action. The speed and horror of crashing are well communicated, as is - strangely enough - the simple thrill of racing. Harlin does a good job with the action sequences, making the moment of impact truly impressive. Racing relies so much on instinct rather than preplanned thought; the pit crew and support staff can only prepare and plan so much - the race still revolves around the driver. Racing is an old sport, and any tried-and-true fans who rent or buy this film hoping accurate, down-to-the-nub details will be disappointed. Harlin and Stallone take plenty of dramatic license. The famous chase through the streets of Chicago? Come on. While obviously something like that would never happen, I understand that Harlin and Stallone were trying to communicate the rage of a rejected young man in a unique and forceful manner. I can allow for that; but the chase went on far too long, almost as though it were enjoying the spectacle for its own sake. Don't say you weren't warned.

Still, in between the racing montages and the overly-loud boom-boom music, there are some good parts. Robert Sean Leonard of "House" fame turns a really great performance. Stallone is strangely given little to do - the story of his character, Joe Tanto, is truncated, giving the impression that is where a lot of cutting happened so the film focuses more on Jimmy Bly (a suitably intense Kip Pardue). This is unfortunate, because I speculate that it is Tanto's back-story that is the real catalyst for the final climatic race. Certain elements of the story felt forced as a result. Our introduction to Joe Tanto happens with little warning or preamble, and exactly why Carl Henry (Burt Reynolds) thought Tanto could help the situation is never clearly stated. Stallone is perfectly cast as the old veteran with a few good races left in him; but , save for the ending, all his character does is dispense advice throughout the film. We see his impact on others, but never really see the impact of events on him.

And this is ultimately what drags Driven down: is it about Bly (Pardue) or Tanto (Stallone)? They assembled some good young acting talent, had Stallone ready to play the embattled-but-charming man of wisdom, had Burt Reynolds ready to chew up any scenery he was given. What was 'wrong' in the '80s for Stallone was 'right' for this movie: if it was more about his character, Joe Tanto, his relationship with Carl Henry (Reynolds), and the changes Tanto had to make to help a younger driver and allow himself to get back a little dignity, suddenly you'd have a pretty good film on your hands. Instead, what we have is an assemblage of racing montages with fragments of a story in between - a real wasted opportunity.
One person found this helpful

Jerome CrigerReviewed in the United States on May 2, 2021
1.0 out of 5 stars
Bad and unbelievable.
Verified purchase
What are we racing here? Indy? Indy does not race in Europe. F1? F1 do not race ovals.
Oh love the scene where they race "1000" horsepower open wheel cars through city streets because the lead driver is having a tantrum. Pretty sure that is Felony reckless endangerment so not only would both drivers probably be facing criminal charges. At the very least they would be banned from participating in any form of motorsport ever again.
If you want to enjoy a real movie about racing go watch Rush. It is one of the best racing films ever made.
One person found this helpful
See all reviews
Back to top
Get to Know Us
Make Money with Us
Amazon Payment Products
Let Us Help You
EnglishChoose a language for shopping. United StatesChoose a country/region for shopping.
© 1996-2022, Amazon.com, Inc. or its affiliates