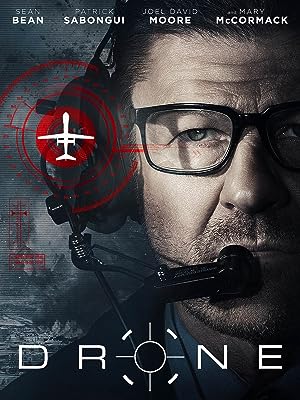 (210)
5.41 h 29 min2017X-Ray18+
A drone pilot (Sean Bean) involved in a deadly, covert mission overseas must confront the reality of his actions when a mysterious man seeking revenge holds his family hostage.

E. KaineReviewed in the United States on July 21, 2017
5.0 out of 5 stars
Wow! Thought provoking.
Verified purchase
Wow!
I recently watched Eye in the Sky and this is much better. Drone tackles the idea of 'black and white ' issues around the use of drones head-on but in a much more 'matter of fact' way. In retrospect the hand wringing in Eye in the Sky just doesn't seem believable, sure they want to get it right but the enemies are like nails and we have some huge hammers.

The Drone story is complex and the performances are excellent. The cinematography has a realness that adds to the intensity of the story.

I was hooked for the whole film. I will be watching it again to pick up more clues. I won't give away the ending but it is...

J.H.Reviewed in the United States on December 20, 2021
2.0 out of 5 stars
Drone’s are usually safe.
Verified purchase
Drones are a fun concept. I own A kids Military themed drone, so I purchased this movie. This movie about military drones. Yes I know this is just an Amazon review on a USA website. This military drone thing has got me going. It looks pretty safe. Seems like a good network. I do like drones. They seem pretty safe. They keep you safe. I like the equipment. Bright minded people did invent these drones. They’re neat. So I give this movie about a B or a C rating because there is no cataclysmic events within the storyline so it’s missing the whole thing but however since there was no other movie dynamic I believe this is a good thing it’s the right direction it’s the right storyline however missing some Quintessential elemental points about drones the activity the war the potential and after affects of use of drones the potential of navigation units within drone capability in misses the key concept of you know the rhythmic of drum timing scheduling mapping your time zones are a big concept but you know it also misses the key concepts of your navigation within you know narrow districts of communication that’s a whole different story point. However I do like this whole movie idea it looks so real it looks real. I don’t even know what to think. This stuff is so cool. It’s like a one math world. Power to peace peace on earth.

JaniceReviewed in the United States on May 30, 2017
4.0 out of 5 stars
A Thoughtful Thriller
Verified purchase
Personally I considered this film to be well-paced and intelligent, with nice cinematography as well as some good acting, particularly from Sean Bean as a drone operator whose wife and son know nothing of his occupation and Patrick Sabongui as a Pakistani who lost his own family in an unmanned airstrike. Those who consider it "boring" may have been expecting an action picture, when in fact it's more of a psychological drama. Rather than simply play into our paranoia, it points out that cultural conflicts are not necessarily as clear-cut as they seem and raises uncomfortable questions concerning prejudice, morality and accountability. Sabongui's character is not some contemporary caricature; he is a wounded human being whose purpose is not so much to avenge himself on the American family he confronts as to awaken its conscience. "You seem like honest people," he remarks early on, only to proceed to drive them to expose the dishonesty behind the appearances. If you don't mind a film that blurs the boundaries of convention and wants you to think a bit, by all means give this a chance.
12 people found this helpful

Mike HReviewed in the United States on June 26, 2017
3.0 out of 5 stars
Good for a Sunday time filler.
Verified purchase
Slow story line, but picks up toward the end and gets more interesting. Like another reviewer here said, if you watch the preview trailer to the movie, you pretty much get the jist of the whole movie in a condensed format.

It's a good movie for a boring Sunday afternoon time waster, it was good, but could have been done much better if it didn't diddle daddle and waste a bunch of time getting to the thick of the plot, which wrapped up well at the end of the movie.
3 people found this helpful

lynetteReviewed in the United States on January 7, 2020
3.0 out of 5 stars
good but,,,,,,,,
Verified purchase
movie was good but, and but, if this was true i would say charge him as a traitor, neil that is

Robin LeighReviewed in the United States on November 1, 2020
1.0 out of 5 stars
Not very good.
Verified purchase
Not very good. P
See all reviews
Back to top
Get to Know Us
Make Money with Us
Amazon Payment Products
Let Us Help You
EnglishChoose a language for shopping. United StatesChoose a country/region for shopping.
© 1996-2022, Amazon.com, Inc. or its affiliates