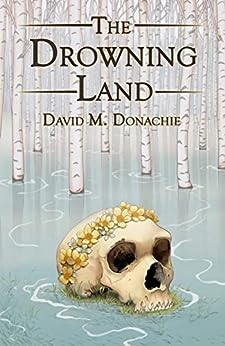 by David M. Donachie (Author) Format: Kindle Edition
See all formats and editions
Sorry, there was a problem loading this page. Try again.
The world is drowning.
Edan’s tribe has always survived by knowing the land and following its stories.
But now their world is changing, and they must change with it, or die.
When young fisherman Edan rescues the troll seer Tara from Phelan wolf-touched, he makes a powerful enemy. But Tara’s visions bring them hope that the world might still be saved.
Edan must break away from tradition and cross the Summer Lands in search of a new future, but where does that future lie? With Phelan’s wolf clan? With the Fomor sea-devils? Or with Tara’s uncertain hope for salvation?
The Drowning Land takes us back eight thousand years to the Mesolithic Period when a lost land, Doggerland, still connected England to France across what is now the North Sea. Inspired by the extensive research conducted by archaeologists over the past two decades, this is a story of our distant ancestors and how they confronted the climate catastrophe that overwhelmed their world.

4.6 out of 5 stars
4.6 out of 5
19 global ratings
How are ratings calculated?
To calculate the overall star rating and percentage breakdown by star, we don’t use a simple average. Instead, our system considers things like how recent a review is and if the reviewer bought the item on Amazon. It also analyzes reviews to verify trustworthiness.

Adamantius1
4.0 out of 5 stars A wonderful fantasy novel full of magic and a history novel well researched!
Reviewed in the United States on February 1, 2021
Verified Purchase
The Drowning Land takes you back in time to a land of hunter-gatherers, trolls, and spirits called the Fomor. Edan is a fisher, the least of his clan, and trying to figure out who he wants to be. On their way to the Summer Hunting Grounds, they encounter another tribe, the wolf-men, who have taken a troll named Tara captive. With Edan’s help, Tara escapes, forcing the clan to run for their lives. But the wolf-men aren’t their biggest threat. The fomor are about to flood the land, drowning everyone and everything they’ve ever known. In the midst of battling their fears, Edan and Tara are from two very different cultures only adding to the tension. I love how Donachie created their different languages! For a linguistic nerd like myself, the result was mesmerizing. Even though this is a fantasy novel, it is also an historical novel. Donachie has done his research and has really brought the past to life. Unlike other travel log type stories, I never really found myself wondering if we were ever going to get there. The Drowning Lands is a beautiful fantastical world totally worth the read!
Read more
Helpful
Report abuse

LAS Reviewer
5.0 out of 5 stars Good Reading
Reviewed in the United States on February 18, 2021
Salty ocean water is seeping into the meadows and forests and destroying them. There are fewer animals to hunt or plants to gather with each passing season, so how can Edan and Tara hope to survive?

The world building in this novel was phenomenal. Mr. Donachie created several different tribes among the humans and Troll People that each had their own complex cultures, histories, taboos, rituals, and legends. Figuring out the differences between them was nearly as rewarding as taking note of all of the ways in which they were more similar to one another than most of them would probably have cared to admit. The author also created well-developed and logical settings that helped to explain why one culture might fear a forest while another couldn’t imagine life outside of it. I couldn’t have been more impressed with all of the work he put into making Doggerland come alive in my imagination.

I loved the way the romantic subplot was handled. The characters involved in it were dealing with multiple conflicts at the same time, so any hint of love or romance between them needed to develop slowly when they found moments here and there to catch their breath. This gave them plenty of time to get to know each other as individuals first. It also made me eager to find out if one of them would finally make the first move and push that part of the storyline forward!

The pacing was strong and steady from the first scene to the last one. No matter how many chapters I’d already read on a particular day, I always wanted to read just one more. It was exciting to imagine what might happen to the characters next. The storyline always struck that perfect balance between action scenes and brief moments of reflection and rest when needed.

One of the things I enjoy the most about prehistoric stories like this one is how they translate real scientific discoveries about the lives of ancient people into fiction. Mr. Donachie did an excellent job of explaining some of the most recent theories about what life in the real Doggerland was like eight thousand years ago and what probably happened to the people who had to flee it as the sea levels rose and all of that land was swallowed up by the ocean. Without giving away spoilers, I was also mesmerized by the author’s explanation of who the Troll People were and why it’s possible they truly existed thousands of years ago.

I can’t recommend The Drowning Land highly enough, especially to anyone who adores stories about hunter-gatherers and prehistory.

Jason Bradley Thompson
4.0 out of 5 stars YA Adventure at the End of the Mesolithic Era
Reviewed in the United States on June 16, 2021
8000 years ago, as the Ice Age ends, rising seas inundate the marshy area that is now the English Channel, disrupting the lives of the nomadic hunters and gatherers who live there. Edan, a teenage boy in one threatened group of foragers and fishermen, accidentally rescues Tara, a Neanderthal ("Troll") girl captured by a larger tribe, and they set off to find Tara's people and perform a ritual they hope will stop the sea. Along the way, they are beset by earthquakes, flash floods and lions, and pursued by Phelan, an obsessive tribal leader who wants to sacrifice Tara to the Great Wolf.

Meticulously imagined based on archaeological discoveries, The Drowning Land accepts the challenge of depicting mesolithic people with modern psychology and personality, traveling a landscape without permanent human settlements, carrying most of their lives on their backs. Most of the book sees the heroes running from place to place towards quixotic goals as death claims the side characters, but the budding friendship between Edan and Tara is the core of the book and keeps things from getting too grim (a brief, non-explicit rape threat from Wolf Clan members in the first 1/4 is possibly the most disturbing moment). Along the way, the Neanderthal and the fisherman meet people who represent other seeds of human futures: the Grass People who gather seeds and build teepee-like huts, Phelan's Wolf Clan who break tradition by building villages and planning to cut down the forbidden inland forests ("We will cut down the forest! We will fell the Great Wood with our axes!" "Unthinkable! Blasphemy!"). Eventually, they meet the oldest tradition of all, Tara's Neanderthals, who like many of the characters, have placed their faith in a confrontation with the sea.

Hints of supernatural elements occasionally flash into the narrative -- possibly prophetic visions, and Edan's nightmares of the Fomor, the terrifying water-monsters that he and others imagine are driving the waves. But Donachie is too good a writer to have anything unambiguously supernatural break his well-researched mesolithic world, or to draw blunt comparisons with the current age of migration and climate change. Suitable for adult or YA reading, it's an engrossing vision of how people might have lived in a bygone world.
Read more
Helpful
Report abuse
See all reviews

Amazon Customer
5.0 out of 5 stars A really good read!
Reviewed in the United Kingdom on February 18, 2021
Verified Purchase
Just finished reading this last night and wish it had never ended. I loved every minute of it and would highly recommend this book. The story takes place in what is now known as Doggerland during the Mesolithic part of the Stone age and follows the story of Elan, a young fisher as the end of his world approaches.
Well researched and equally well written with believable characters and a clever blend of fantasy and the mystical that never strays too far from what is real, this makes for a perfect and engrossing world and story.
10/10
Read more
One person found this helpful
Report abuse

Amazon Customer
5.0 out of 5 stars Fantastic read
Reviewed in the United Kingdom on February 13, 2021
Verified Purchase
What an amazing story, well researched and written. Didn't want it to end was so good. The afterword is excellent bringing all the threads together. It must have been a terrifying time for all the peoples to have tried to live through and make sense of.
Read more
One person found this helpful
Report abuse

P Ward
5.0 out of 5 stars Excellent book
Reviewed in the United Kingdom on March 1, 2021
Verified Purchase
This book is outside of my usual reading material, but it is an excellently written and engrossing adventure, well worth the purchase!
Read more
One person found this helpful
Report abuse

Amazon Customer
5.0 out of 5 stars Enjoyable
Reviewed in the United Kingdom on June 14, 2021
Verified Purchase
This was a birthday present and the recipient enjoyed it so much that it was read in a couple of days.
Read more
Report abuse
See all reviews
Back to top
Get to Know Us
Make Money with Us
Amazon Payment Products
Let Us Help You
EnglishChoose a language for shopping. United StatesChoose a country/region for shopping.
© 1996-2022, Amazon.com, Inc. or its affiliates