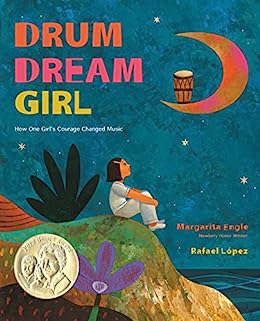 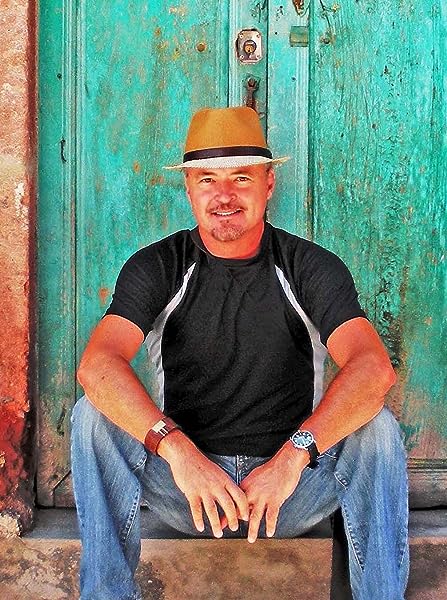 Gr 1–4—In Cuba, Millo Castro Zaldarriaga longs to play her drums for all to hear, but on her island only boys are allowed to perform with drums. She perseveres and continues to play and to dream. Eventually, she is invited to join her sister's all-girls band. Her father will not permit her to perform with them, though he allows her to be taught. She continues to practice and dream of a time when she can perform. Finally, she is able to perform in public, and she convinces those who listen that girls, too, can play drums. Adriana Sananes's musical voice invites listeners to dream along. Lovely music, drumbeats, and sound effects accompany the entire tale. The audio production includes a second track with page turns, and a historical note is included in the final track. VERDICT Inspired by a true story, this is a wonderful addition to any collection. ["Engle's spare, rhythmic text gets at the heart of the struggle to achieve a dream": SLJ 1/15 starred review of the Houghton Harcourt book.]—Elizabeth Elsbree, Krug Elementary School, Aurora, IL --This text refers to the audioCD edition.

Margarita Engle is the Cuban-American author of many verse books, including the Newbery Honor winner The Surrender Tree, the PEN USA Award winner The Lightning Dreamer, and the verse memoir Enchanted Air, which has won many awards, including the inaugural Walter Dean Myers Award Honor and the Lee Bennett Hopkins Poetry Award. Her books have also received multiple Pura Belpre Awards and Honors, Americas Awards, Jane Addams Awards and Honors, and more.

Adriana Sananes is an award-winning bilingual New York City stage actress, director, and narrator. A recipient of a theatre fellowship from The Princess Grace Foundation, she has recorded more than 150 audiobooks, including Spanish versions of Polar Bear, Polar Bear, To Kill a Mockingbird, Go Set a Watchman, and Pulitzer Prize winner Enrique’s Journey, for which she won a Audie for Best Spanish Narration.

Rafael López, a four-time recipient of the Pura Belpre Illustrator Medal, grew up in Mexico City where he was immersed in the rich cultural heritage and native color of street life. To build community, López developed a mural style that works like a large scale paint by numbers. He has worked with hundreds of children, families, museums and community members to create murals that often reclaim blighted neighborhoods around the nation. --This text refers to the audioCD edition.

"The heroine's tenacity in the face of naysayers will inspire all dreamers, and the illustrator's smile-inducing cameo on the last page emphasizes the universality of Millo's story...For those looking for more nonfiction titles about female musical powerhouses."

"A beautiful account of a young girl's bravery and her important contribution toward gender equality in the creative arts."

"A valuable addition to the growing library of stories about strong Latina women." --This text refers to the audioCD edition.
Read more

4.8 out of 5 stars
4.8 out of 5
353 global ratings
How are ratings calculated?
To calculate the overall star rating and percentage breakdown by star, we don’t use a simple average. Instead, our system considers things like how recent a review is and if the reviewer bought the item on Amazon. It also analyzes reviews to verify trustworthiness.

ScotFlowerTop Contributor: Children's Books
TOP 500 REVIEWER
5.0 out of 5 stars Beautiful book
Reviewed in the United States on May 24, 2020
Verified Purchase
Beautiful story on a girl who wanted to play drums and had to go against cultural norms to do so.

Just so you know, I am not a big fan of feminist pushing books. I don't like books that advance women at the expense of men or the attacking of men (or visa versa for that matter). But the great news is that this book does none of those things. The girl pursues her drum dream respectfully. She only takes lessons once her father approves and only performs once her teacher approves. At the end of the book, it also says both boys and girls should be allowed to pursue their dreams. Therefore, I feel this book did feminism beautifully right and in a wonderfully balanced way. I have no qualms reading this book to my drum playing boys.
Read more
7 people found this helpful
Helpful
Report abuse

Lady B
5.0 out of 5 stars A Powerful Story For Musicians and Females Who Love Percussion!
Reviewed in the United States on November 24, 2020
Verified Purchase
I really love this story! I am a percussionist and have had varied challenges with playing within a system that encourages "men" to play and women to "dance." I am also a dancer however I like to dance and drum. I have read this story to several groups of students in music classes as well as in general education classes. It allows a teacher to build it into a curriculum that promotes courage, uniqueness, and culture. This book is also great for homeschooling, and just pleasure reading. I love this story and the fact that it is based on a true story. Cuddos to the author and illustrator. Well worth your investment.
Read more
One person found this helpful
Helpful
Report abuse

Mariana Llanos
5.0 out of 5 stars Enchanting
Reviewed in the United States on February 26, 2016
Verified Purchase
An amazing book for readers of all ages. I read it with my kids ages 9 and 4, they loved not only the story, but also the illustrations. A few days later, my 4-year -old told me, "Mom, I dreamed of the Drum Dream Girl! I was playing the drums!" This book is important not only for its beautiful prose and appealing art, but also to remember how women were not allowed to follow their dreams at certain point of our history.
Read more
15 people found this helpful
Helpful
Report abuse

Mary
5.0 out of 5 stars Girls Music Dream Positively Personified
Reviewed in the United States on April 25, 2020
Verified Purchase
A delightful treat for change of view on Girls and the perception of instruments being limited to boys. I love the integration of such bold eye catching illustrations richly colorful and detailed. Imagination being the focus and achieving dreams despite cultural obstacles is a wonderful message.
Read more
2 people found this helpful
Helpful
Report abuse

Anne
5.0 out of 5 stars Fun, aspirational book for little girls & boys
Reviewed in the United States on June 28, 2016
Verified Purchase
I bought this book for my 2.5 yr old daughter and she absolutely loves this book and has asked to read it for bedtime every night for about 2 months now. She can also recite verbatim the first half of the book now. There are certain repetitive phrases that she also loves saying "big, round silvery moon-bright timbales." It's so fun to hear her recite it from memory. And I appreciate the multi-cultural theme that underscores this book as well. Overall, an interesting, aspirational book about a little girl's dream and how she achieved it.
Read more
7 people found this helpful
Helpful
Report abuse

Olga Scacun
5.0 out of 5 stars Very Inspiring
Reviewed in the United States on July 24, 2019
Verified Purchase
I love this book. I checked it out in the library and my son and I re read it many many time. And then I ordered several copies to give as gifts to my friends kids.
Read more
One person found this helpful
Helpful
Report abuse

Donald Cobb
5.0 out of 5 stars Drum Dream Girl
Reviewed in the United States on January 20, 2021
Verified Purchase
Inspiring story of determination. Should be read to any child as an example of life's reward for unwavering determination, and joy in what you do.
Read more
Helpful
Report abuse
See all reviews

Red Bus Book Lover
5.0 out of 5 stars True story of courage, endurance and music
Reviewed in the United Kingdom on June 1, 2019
Verified Purchase
This book is based on the story of Chinese-African-Cuban girl Millo Castro Zaldarriaga who was discouraged from pursuing music in Cuba because drums were just for boys. The colours are absolutely radiant and the story is strongly told. Useful notes at the back inform us that not only did Zaldarriaga get to play, she got to play for US president Roosevelt. This would be a wonderful book to have at home but also for use in school for thinking about endurance and facing up to prejudice.
Read more
Report abuse

L. York
5.0 out of 5 stars Wonderful story, Stunning illustrations.
Reviewed in Canada on March 2, 2020
Verified Purchase
My little guy loves this book and I love the message that both boys & girls can follow their dreams!
The illustrations are just beautiful.
Read more
Report abuse

Catherine O'Keeffe
5.0 out of 5 stars A story that inspires interest in drumming.
Reviewed in Canada on October 25, 2020
Verified Purchase
My students loved this book. It is a great story to introduce Cuban music to the class.
Read more
Report abuse

Tanya Srivastava
5.0 out of 5 stars Lush Illustrations
Reviewed in India on August 22, 2017
Verified Purchase
A Wonderful book about with breathe taking illustrations and talking about gender inequality and how does she come over it.
Read more
One person found this helpful
Report abuse