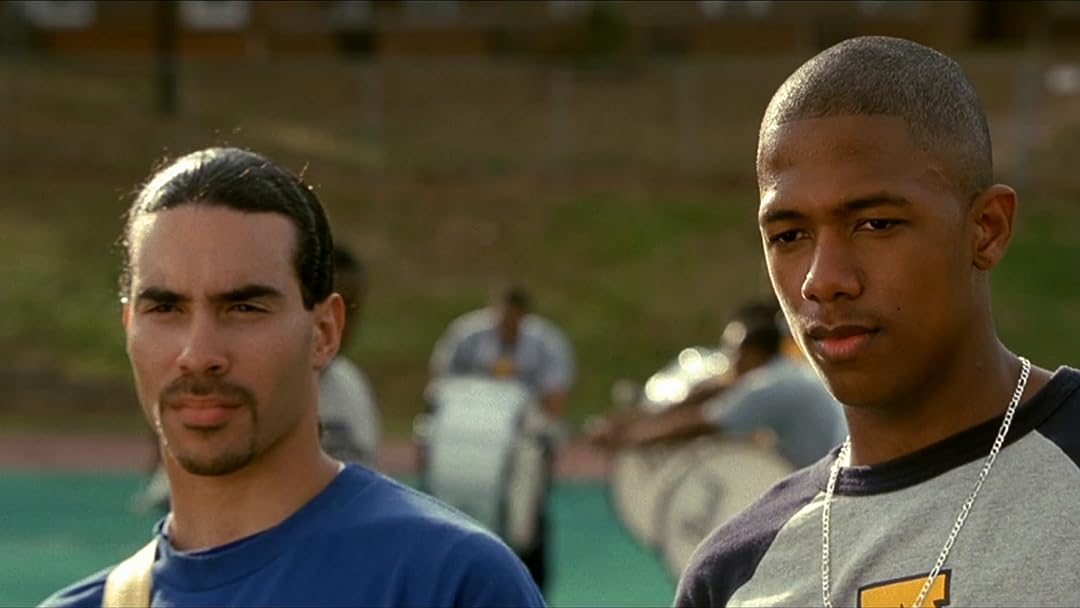 joel wingReviewed in the United States on February 15, 2021
3.0 out of 5 stars
Celebration of historically black college marching bands
Verified purchase
Drumline came out during a series of films featuring young black men from bad backgrounds going to college and that causing a dilemma for them. Drumline changed that dynamic up a bit. This time it was Nick Cannon going to a historically black college on a music scholarship to play drums. Instead of the hood dragging Cannon down like in those other films it’s his attitude that is the problem. He’s rebellious and talks back which gets him into all kinds of trouble. That’s the root of the story. He has to conform to be part of the group but he always wants to do things his way.

The real star of the film wasn’t Cannon however but the music and the performances. Historically black colleges are known for the elaborate routines their marching bands do and there’s plenty of that here. At the same time this might be Cannon’s best performance.

Aislinge KelloggReviewed in the United States on December 11, 2017
5.0 out of 5 stars
Love Marching Band Music? Watch this Film!
Verified purchase
As a music lover, including college level marching bands, this was indeed a one of a kind film for me! The modern music played in other parts was acceptable - there was nothing wrong with it - it’s just isn’t my style. But every bit of music played by the battling bands was truly delightful, a truly incredible experience! It helps to uplift my spirits my spirits, allows me to remain patient until I can see the Madison Scouts.

It was a powerful film, and I found many of the actors very likeable. Usually, in his more modern work, such as acting the fool on AGT, I haven’t been a fan of Nick Cannon, but in this movie, fresh-faced and young, he was less the stage jester and more the serious actor. Too bad he seems to no longer exist.

I loved this film, very, very much. The music was a huge thrill me and i’d Always liked it, but this pushed me to find me more of it. I very, very rarely rate a film the highest rating ever, just as I rarely condoned most employees the highest rating on evaluations - there is always room for improvement. In this film, I have to say it had the room and opportunity to reach its fullest potential.

Rebecca A. BaileyReviewed in the United States on July 25, 2020
1.0 out of 5 stars
DVD will not play
Verified purchase
Tried to play the DVD and could not get past this message: "Playback not authorized in your area"

I had to look this up to understand it. I copied and pasted the info below. Basically BUYER BEWARE: make sure the DVD you buy and your device are both from the same "region". Or you get a worthless DVD.

In general, DVDs will play only on DVD drives that use the same region country codes. For example, if you live in the United States or Canada, you are in Region 1. You can play Region 1 DVDs only on a DVD drive that is set for Region 1. If you try to play Region 2 titles on a Region 1 DVD drive, you will receive an error message.

To avoid this error message, make sure that your DVD player and the DVD you are watching are both coded for the same region. Check the DVD case for more information. You can usually find the region code number printed over a small globe icon on the back of the case.
3 people found this helpful
Report abuse

CherilynReviewed in the United States on July 28, 2020
5.0 out of 5 stars
Great DVD for BAND kids!
Verified purchase
This was a great movie for my two kids who are in marching band at school. They have watched the movie several times and now like to "judge" the players and watch all the techniques of the players. They are more interested in the band scenes instead of the other "fluff" of the movie. The music is good and the bands are excellent. Real marching bands not just for Hollywood. A few adult words but not the "f" word are used and a bit of sexual talk so more of a teen level movie. Thankfully most of the movie is more about the music!
A good watch if you have kids in Marching Band!
One person found this helpful
Report abuse

Aaron_ZanzibariReviewed in the United States on January 5, 2014
5.0 out of 5 stars
Simply Outstanding! A tribute to the musical tradition of the Historically Black Colleges and Universities
Verified purchase
Having the privilege of growing up in Jackson, Miss. and playing in an all-black high school marching band, I can relate on an intellectual and visceral level to the music and showmanship that was an integral part of football in the black community throughout the south. Our band paled in comparison to what the colleges produced but our drummers often got their inspiration from attending the epic battles between what was then Jackson State College, Grambling College, Alcorn State, and Southern University.
To see and hear the showmanship and the instrumentation and drumming in this movie is quite thrilling to say the least.

The drum director and his opposite at Morris Brown were perfectly cast---One being dedicated to showmanship AND music fundamentals, and the other catering more to the R&B and the kinetic connection that the student and alumni craved.
(Morris Brown director's backside motions as he directed his band from his platform in the stands is a hilarious sight.!)

The bands' on-field whirlwind movements, the cheerleaders(Oh! What cheerleaders!), the horns, the cadences, are an
overwhelming sight for the eyes and a feast for the ears.

This movie really wants you get up from the couch and shake your _ _ _ _ y.

The story line is very interesting and informative in showing the difference in attitudes of those of us who grew up in the South
and of those brought up in the north. The sight of the intermingling of white students and black students attending school together and performing with each on the field was a refreshing sight, given the destructive effects of Jim Crow Laws that forced Blacks in the 40's to the 60's to develop there own network of separate schools and social institutions.

I HIGHLY recommend this video to all for a re-connection with old experiences and for another insight into the Black Experience
for others.
11 people found this helpful
Report abuse

amazon customerReviewed in the United States on November 12, 2019
5.0 out of 5 stars
Good movie
Verified purchase
I had never seen this movie but came across it while searching for a film for movie night. I have a teen on the drumline and this movie highlights the hard work and determination of band kids. The kids in this movie are in college and mine are in high school so we skipped a couple of parts of the movie. Great story.
2 people found this helpful
Report abuse

HollyReviewed in the United States on May 14, 2010
4.0 out of 5 stars
Seen it twice now, liked it both times
Verified purchase
This movie was recommended to me by a friend when my daughter was in junior high. She is a percussionist and at that time, wasn't interested in marching band at the high school level, but we wanted to see the movie due to her interest in drumming. Since that time, she has gotten into marching band and an indoor drumline at her high school and the indoor drumline she participates in came in 14th at national competition last month (proud mom here).

The first time I saw the movie, it really seemed over the top to me and while I enjoyed it, it seemed unrealistic in many ways. This is a feel-good movie with a talented but arrogant under-priviledged kid getting the opportunity of a lifetime and showing how he responds. I am always a sucker for this type of film. The second time I watched this just this past weekend, I enjoyed it even more. After going through a high school marching band season and an indoor drumline season, this all seemed perfectly normal. The number of hours, the discipline, the hardwork these kids put into this are very accurately portrayed based upon my own experience.

To sum it up -- a fun, entertaining movie that anyone who has participated in marching band (and drummers in particular) will enjoy. The additional bonus material were great. Glad I bought it!
5 people found this helpful
Report abuse

leeleeReviewed in the United States on February 19, 2007
5.0 out of 5 stars
Fantastic marching bands!
Verified purchase
I really loved this movie and even though the cast are all college students, it took me back to my student days at UNC. The marching bands and music are outstanding. Wonderful schools like Clark Atlanta, Bethune-Cook, Morris Brown, and Grambling State do exist and have terrific marching bands on display in the movie. The competition finale blew me away. By the way, Clark Atlanta just won the 2007 Honda Battle of the Bands which is a major competition showcasing 10 top college marching bands. The dvd will be available 5/31 from Honda in high-definition for $14.99 if you need more views of these great bands. Just type in "Honda Battle of the Bands" to locate their website. The actors are all well cast and Nick Cannon will surely have a great acting career ahead of him. He plays a talented drummer raised by a single mother who never tangled with the law and only cares about music. Problem here for him is his attitude and inability to read music. The scene where he confronts his runaway father after his high school graduation is heart-rendering especially when he tells his father "I did all this despite you." He obviously wanted his father to be proud of his accomplishments including earning a full college scholarship. I highly recommend this film! By the way, put on your dancing shoes because the music will make you want to throw down and boogie.
6 people found this helpful
Report abuse
See all reviews
Back to top
Get to Know Us
Make Money with Us
Amazon Payment Products
Let Us Help You
EnglishChoose a language for shopping. United StatesChoose a country/region for shopping.
© 1996-2021, Amazon.com, Inc. or its affiliates