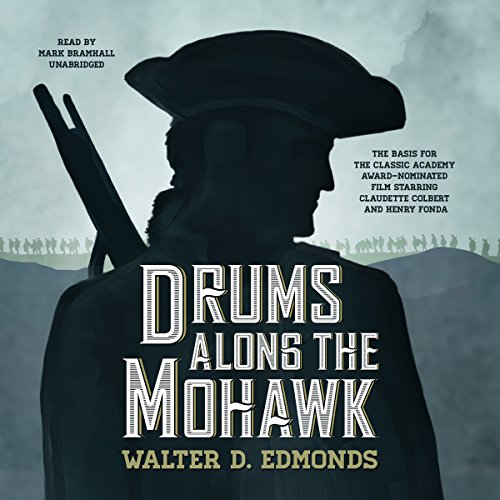 Drums Along the Mohawk

Drums along the Mohawk, Walter D. Edmonds' masterpiece, is not only the best historical novel about upstate New York since James Fenimore Cooper, it was also number one on the bestseller list for two years, only yielding to the epic Gone with the Wind.

This is the story of the forgotten pioneers of the Mohawk Valley during the Revolutionary War. Here Gilbert Martin and his young wife struggled and lived and hoped. Combating hardships almost too great to endure, they helped give to America a legend that still stirs the heart. In the midst of love and hate, life and death, danger and disaster, they stuck to the acres that were theirs and fought a war without ever quite understanding it. Drums along the Mohawk has been an American classic since its original publication in 1936.

Special invitation from Audible!
Learn more about Membership
List Price: $38.46
You Save: $16.51 (43%)
By completing your purchase, you agree to Audible’s Conditions Of Use
Sold and delivered by Audible, an Amazon company
Share

4.6 out of 5 stars
4.6 out of 5
191 global ratings
How are ratings calculated?
To calculate the overall star rating and percentage breakdown by star, we don’t use a simple average. Instead, our system considers things like how recent a review is and if the reviewer bought the item on Amazon. It also analyzes reviews to verify trustworthiness.
Top reviews

Bruce W
4.0 out of 5 stars Convincing historical fiction
Reviewed in the United States on December 15, 2018
Verified Purchase
Most probably know this story not from the book, which was a 1936 best-seller, but rather from the 1939 John Ford classic film based upon it. I have not seen the film, so I will comment here only on the novel itself. If you have an interest in colonial American history or enjoy the novels of James Fenimore Cooper, then you will probably enjoy this novel as well. Richly detailed, the story is set in the Mohawk valley in northern New York State during the American Revolutionary War. This was the major east-west artery then and now, connecting the Hudson River valley and Albany to the western portions of the state (the New York Thruway I-90 of today cuts right through the settlements in the story). The author gives a great sense of setting with lots of details about the routines of the isolated settlers of that era. While the characters are not especially complex, the prejudices and tensions between Dutch and Germans, Tories and Continentals, is nicely realized. Real historical figures like Herkimer and the Johnson family appear in supporting roles. Perhaps not surprising for the time it was written, both blacks and Native Americans are largely depicted negatively, with some offensive caricatures in both dialog and character. The action sequences are fairly compelling, although the descriptions of battle are a bit murky and abstract at times. Overall, this is an entertaining read, especially if you have interest in the history of the area.
Read more
8 people found this helpful
Helpful
Report abuse

James
2.0 out of 5 stars Look carefully at Amazon's photo of this book.
Reviewed in the United States on February 8, 2020
Verified Purchase
Poor Walter Edmonds. He wrote a book considered worthy to be included in a collection of "The Greatest Historical Novels" and instead of his name printed along the spine in large gold-embossed letters, there is instead that of "James Fennimore Cooper". Only "Gone With the Wind" sold more copies than Edmonds' book in his time, and yet he is replaced by Cooper's name by a careless publisher. Shame on somebody for dumping this flawed edition on the market. On the other hand, it is a great read, and who knows? The misprinted copy might be worth something someday!
Read more
7 people found this helpful
Helpful
Report abuse

Kindle Customer
5.0 out of 5 stars Better than the Movie
Reviewed in the United States on July 28, 2017
Verified Purchase
I have grown up watching the movie made from this wonderful book, starring Henry Fonda, Claudette Colbert, Ward Bond to name a few. I never knew what a wonderfully engaging and emotion filled story it came from. What you never get to see in the movie, though it is still one of my favorites, is the real depth of passion Gil and Lana have for each other, though the film makes an admirable attempt at it. Some of the characters you thought you knew will surprise you...including Gil and Lana. It's a book I know I will read again with as much enjoyment as I did this first time.
Read more
3 people found this helpful
Helpful
Report abuse

F. Davis
4.0 out of 5 stars Way better than the movie.....
Reviewed in the United States on March 24, 2015
Verified Purchase
Historically, this book is right on. I never like reading about battles and military strategy, but I have a feeling the accounts are historically accurate to a detail. Some of the language is even archaic enough that I had to use my dictionary, and some of the words weren't in the dictionary at all. The story line is not the best element of the book, but the life of the sometime soldier/sometime pioneer farmers and their wives is what kept me reading. The depiction of the Indians of this area and time would be nothing short of politically incorrect, but probably accurate? The eloquent descriptions of revolutionary, wild New York state countryside, survival in the wilderness, and early pioneer farm life are the best thing about it. Aside from skimming the battle discussions, I really enjoyed this book.
Read more
5 people found this helpful
Helpful
Report abuse

CoachT
5.0 out of 5 stars Excellent look at a part of the revolutionary war you don’t hear much about.
Reviewed in the United States on July 27, 2020
Verified Purchase
Loyalists and patriots go at it in the Mohawk valley west of the Hudson. Indians were for the most part on the side of the Tories, or those helping the British. Brutal portrayal of the lives of the farmers , attempting to grow crops and build log cabins, only to see them destroyed and joining the militia to fight back.
Read more
2 people found this helpful
Helpful
Report abuse

Kay
5.0 out of 5 stars A wonderful book about settlers in upper New York State during the Revolution
Reviewed in the United States on December 7, 2013
Verified Purchase
This is the second time I am rating this book: this time I could not find the paperback but was able to get a low quality copy printed in 1935. However, my library does not have a copy, and I wanted to give another person a chance to read this wonderful book so I am happy I could get it in any shape at all. .
First time I rated it:
I bought this for a gift. I was shocked that it was not available in hardback at the time.

I first read it as a teenager, about 50 years ago. and have reread it several times . The author is the best historical novelist I've ever read and is highly regarded by historians . His history is accurate, which is very important to me, and I always found his books to be the "I can't put it down" type. Before this I bought it for my grandson. This particular purchase, Oct. 2019,is for a friend ; this book was printed in 1935, is in hardback, and is not in the best
condition, but still I am glad to have found any copy at all. The 5 stars is for the content, not the condition of the book. The service was satisfactory.
Read more
4 people found this helpful
Helpful
Report abuse

Gordon D Sheret
5.0 out of 5 stars An easy read that gives a sense of devastation of the ...
Reviewed in the United States on March 7, 2015
Verified Purchase
An easy read that gives a sense of devastation of the Revolutionary War on the New York frontier. Stalin is supposed to have said that a single death is a tragedy, a million deaths a statistic. So when Richard Berleth in "Bloody Mohawk" whites: "Refugees returning to the Mohawk Valley in the period between 1783 and 1784 found hardly a barn or house standing from Fonda to German Flats." he gives us the statistics, Edmonds provides the tragedy. Chronicled are Gilbert & Lanna (Magdelana) Martin, newlyweds, and their lives through the war. Their homestead is in Deerfield, a community consisting of a handful of settlers near the end of white settlement on the Mohawk River. Their isolation invites an early raid that burns the homes and barns and displaces the entire community to a slightly more secure fort down river. History tends to teach the Revolutionary War as a series of strategic events, however on the frontier the guerilla war was a constant struggle, often fought between former neighbors. Although the Martins and their neighbors are fictional the events closely follow history as do the names, and personalities of leaders. If you are interested in the history of this period I don't think you will be disappointed.
Read more
12 people found this helpful
Helpful
Report abuse
See all reviews

Warrenicus
5.0 out of 5 stars Drums Along The Mohawk
Reviewed in the United Kingdom on May 15, 2010
Verified Purchase
Drums Along the Mohawk (New York Classics)

I first read this book about 30 or 40 years ago. It was a battered second-hand copy which unfortunately did not last that long, as being one of the best books I'd ever read it finally got even more battered. Its spine cracked and all the pages began falling out with some becoming irretrievably lost. Only recently, having discovered the benefits of buying online, have I finally been able to buy a replacement.

There were two books which were published about the sane time. Drums Along The Mohawk and Gone With The Wind. Each book was received with great acclaim by the public of that time but of the two, Drums Along The Mohawk was considered the greatest and was the also the most popular. So why is the lesser of the two now fondly remembered as a classic and the other all but forgotten? The reason is Hollywood. Both were made into films but while one was given the lavish, epic treatment, told in its entirety, The Drums was instead made into a standard western film of the time, with great swathes of its content cut to fit into what was considered the required length for a western. A great shame.
Read more
2 people found this helpful
Report abuse

Zulu Warrior
5.0 out of 5 stars Drums Along The Mohawk
Reviewed in the United Kingdom on May 1, 2013
Verified Purchase
I have long admired the film of this book, one of my favourites, it was interesting to read the book the film was based on. A great book telling the story of the american revolution from the frontier point of view, lots of action with the americans facing the British and hostile indians, loved it.
Read more
One person found this helpful
Report abuse

K. O'Rafferty
5.0 out of 5 stars Readable History
Reviewed in the United Kingdom on December 4, 2010
Verified Purchase
A side show of American history brought to life I have reread this story several times over many years and it never fails to please
Read more
Report abuse

Joanne
5.0 out of 5 stars Five Stars
Reviewed in Canada on April 27, 2016
Verified Purchase
Thanks
Read more
Report abuse
See all reviews
Back to top
Get to Know Us
Make Money with Us
Amazon Payment Products
Let Us Help You
EnglishChoose a language for shopping. United StatesChoose a country/region for shopping.
© 1996-2021, Amazon.com, Inc. or its affiliates