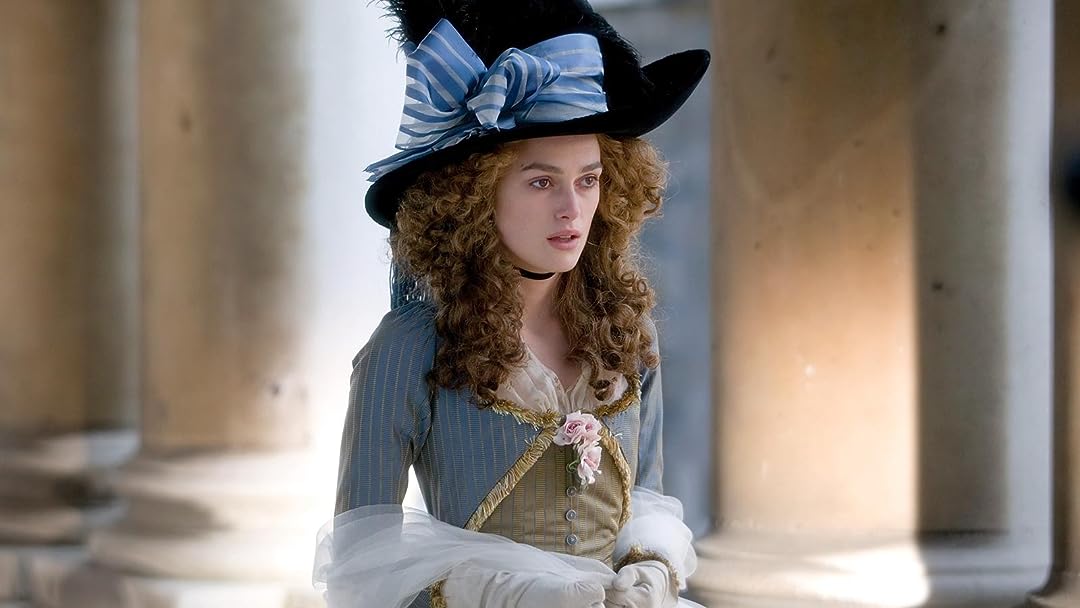 (3,155)
6.91 h 49 min2008X-RayPG-13
A chronicle of the life of 18th century aristocrat Georgiana, Duchess of Devonshire, who was reviled for her extravagant political and personal life.

sophiaReviewed in the United States on December 18, 2017
5.0 out of 5 stars
Emotional and lovely
Verified purchase
I must disagree with those who found this movie to be unengaging, poorly written, or melodramatic. Keira Knightley was able to take on a role of a lady within a past society where women were very much controlled by men. She acted this splendidly and with much emotion, much as she did within the movie pride and prejudice. The orchestral choice for each scene was beautifully depicted and the overall message of the movie was moving. This, I would argue was not dramatic, but rather written the way it was for the purpose of conveying a message of suppression within this time era, as she could not make her own choices which was the reason for her overall unhappiness. I loved it, most movies or shows like this tend to contain too much drama in the sense that the plot is about the women's control over the men, how they earned power through their marriage and used it to their advantage. This movie was about the sentiments of one main character and her unjust life of which was rather saddening, which is not dramatic in the least, in my opinion, but rather showcases the lives of many women within that time era.
62 people found this helpful

HistoryGeekReviewed in the United States on September 26, 2017
3.0 out of 5 stars
Good bio pic that misses so much of the subject
Verified purchase
I'm giving this three stars, not because it isn't a fine, well acted production, but because the movie fails to convey much about this fascinating woman. She was a writer, scientist, and a contemporary of many of the leading minds of her day. While her intelligence is suggested, this movie never moves out of the shallow end of the pool.
69 people found this helpful

J. HooverReviewed in the United States on November 20, 2017
5.0 out of 5 stars
I loved it
Verified purchase
I didn't know anything about Duchess Georgiana prior to my viewing of this movie. I love history though, especially European history and culture. so I was drawn to this. Of course after watching it, I had to do my research. I now know that much of what is in this film is not historically true, and I don't think the movie did a fine job at all at showing us what a remarkable, and kind woman she was. Nevertheless, my knowledge does not change my opinion about the movie. I think the acting is superb, as well as the costumes, and cinematography, just wow! The movie is a visual masterpiece. The acting is great, parts of this movie are so tragic, and painful to watch. Overall, for me, I think this movie is just beautiful to watch, and it took me back to a time that once was.
30 people found this helpful

F. LiljebladReviewed in the United States on November 9, 2015
4.0 out of 5 stars
Those Raunchy Old Days Of King George
Verified purchase
This film is largely based on the actual life of Georgiana, Duchess of Devonshire, the renowned Georgian beauty, political and intellectual hostess, and lover of Earl Grey (yes, the one who invented the delicious tea--who knew he was such a stud!), and an ancestress of Princess Di. I've never cared much for Keira Knightly except in 'Love, Actually'--one tries to suppress the dreadful 'Pride and Predjudice'--but she is remarkably good here. Despite that, it's Ralph Finnes who runs away with the film, as Georgiana's husband the initially cold and utterly selfish Duke of Devonshire, whose glacial exterior masks a caring and rather loving nature (by the standards of the time). Dominic Cooper is clever and very studly as Mr, Grey (not yet an Earl), and Charlotte Rampling is superb as Georgiana's mother, Lady Spencer, caring and affectionate, but cold and implacable, again by the standards of the time. In fact, very few films have ever recreated the true zeitgeist of an era as well as this one. It's truly as if one had stepped back into the era.
54 people found this helpful

MeemeReviewed in the United States on March 23, 2021
1.0 out of 5 stars
Sad Degradation of Women
Verified purchase
This is supposed to be a true story, though I don't know anything of the Duchess so I can't say how true to history it is. Watching this movie, though, leaves my spirit burdened with the sad reality of how women were given no respect or notice of anything. Sadly it's still too prevalent today. There are a few men who actually appreciate, but in general, this male prejudice still exists.

Of course the Duchess in this movie is called a whore---even while still faithful to her cold and undeserving husband-----even though he's bedding every maid and even a girlfriend that the Duchess extended a caring hand to in her girlfriend's hour of need. Said friend proceeds to repay her kindness by sleeping with the philandering husband, but the Duchess is the whore. I get it. And so it still is today.

This movie is exactly why women's liberation came to be. I've never supported it nor do I pound the pavement with it, but I certainly understand it. Women have proven they can survive without the bullying hand of a man and I'm proud of that.

I wanted to give it 5 stars because it was well acted and because it exposes the despicable side of society. But because of the subject matter I can't do it. One poster referred to this movie with one star saying the film wasn't accurate as the Duchess was far too kind to turn her friend out when she caught her cheating with the Duke. That's called, sir, being a door mat. This movie showed a different take, which may disturb some men like this reviewer. The reviewer also said she loved her children too much to ever even consider leaving them, yet completely disregarded the extreme heartbreak, apparently as of no consequence, of being forced to doing exactly that in being forced to give away her beautiful baby sired by the only man she ever loved. This reviewer is proof of the point I was making about nothing much has really changed.

Faye J. LouisReviewed in the United States on November 15, 2017
4.0 out of 5 stars
Freedom in Moderation....?
Verified purchase
Some time after the beginning of the film we hear the phrase "freedom in moderation" and I believe this to be one of many basis to the film. Georgaina is young, beautiful, rich, has the attention of all of society and is a Duchess to top it off.. Everyone wants to know her or be her but if they knew the truth, would they ? Of course, anything that happens inside her home is privy to all of society - freedom ? in moderation I suppose.

But lets leave that phrase aside. Lets not talk of the constraint on freedom implemented by men. Of course all that was infuriating but of equal focus should be the inherent constraint placed on existing.

I think a lesson that Georgaina has learned is that we aren't truly free in the greater sense of the word. She experiences this with love ... the most volatile and purest of emotions. We are tied by love, our politics, religion, emotion, etc. or like choosing your love for one thing over your love for another.

joel wingReviewed in the United States on June 14, 2021
3.0 out of 5 stars
Keira Knightly shows strength in loveless marriage where she's treated as a possession
Verified purchase
The Dutchess is about Keira Knightley adjusting to a loveless marriage with a powerful duke played by Ralph Fiennes. As Knightly tells her mother, Fiennes never talks to her and is interested in nothing but his dogs. He only married to produce a son and heir. The story quickly moves from matrimony to one of patriarchy with Fiennes asserting his power over Knightley as a possession. The dilemma of course is whether she will be able to find any agency in her life or not. Knightley’s character shows a lot of strength especially because she’s humiliated several times by Fiennes. It’s by far the best part of the film.
2 people found this helpful

BixReviewed in the United States on December 8, 2020
3.0 out of 5 stars
17th Century Soap Opera
Verified purchase
The only point of interest is that this flicker has elements of historically correct social reality of the landed gentry and aristocracy. Remember, that the aristocracy, circa 1750, represented less than 1% of the population in England.
Hence, today, what we call "English History" encompasses a tad less than 1% of the population. Should history be that exclusive? In 300 years will history only be written about "celebrities"? Even those "celebrities" who have no talent nor skill; —those pretty few that lard the TV chat programmes as celebrities for reasons that no one really understands? In America, they are electing politicians based on Madison Avenue created pseudo lives. And getting rid of one of these manufactured "politicians" whose life is bereft of any merit or true achievement has been worse than pulling teeth. What will our history be in 300 years? —A damn'd sight worse than the British 18th century, I dare say.
Note: Mr Gray; —the future PM was initially the MP from Westminster; alas, over half of the British constituencies during this time were still elected MPs via their family who owned the land of the constituency. —E.g., there were many constituencies of less than 50 voters electing the son of the landowner. Only men who owned land and some tradesmen could vote. —No women, apprentices, servants, and other working people could vote.
Women could not directly own ANYTHING. Bess of Hardwick was a keen business woman (16th century), but it was all in her husband's name. Even the right to be a mother to their children.
In this flicker the unequal ground upon which men and women sallied is far ore level than in most cases; —i.e. NOT representative of the general aristocratic class.
As the John Lennon song says, "Women are (were) the N-s of the world".
Whilst this this movie illuminates a few historic societal realities, it has little else to recommend is for viewing. if you have read little history, then it might be worth watching. However, I believe that only in America can history be so vacant.
See all reviews
Back to top
Get to Know Us
Make Money with Us
Amazon Payment Products
Let Us Help You
EnglishChoose a language for shopping. United StatesChoose a country/region for shopping.
© 1996-2022, Amazon.com, Inc. or its affiliates