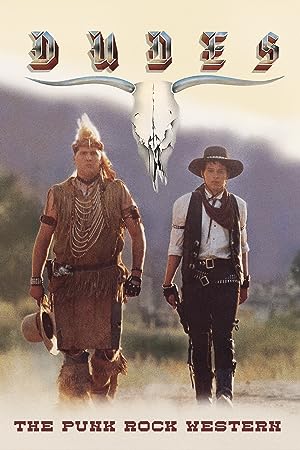 (134)5.71 h 29 min1988R
Two city kids along with their best friend, head west to look for the good life in California. On the way, they come across a vicious biker gang leader and a pistol-packin' beauty who takes them from heaven to hell in this story of reckless youth.

Steven BrownReviewed in the United States on December 8, 2019
5.0 out of 5 stars
Flea is imposing
Verified purchase
Relatively obscure 1-name acotr "Flea" doesn't have many roles to his credit. It's sort of unfortunate, I'm not sure why. Here in Dudes he displays admirable acting prowess. Were the studios to pick up on him more, perhaps he could have had a career. Now 30 years in the rear view it is probably too late for him unless he wants to work on movies about old folks' homes like Gideon or Bubba Ho-Tep. Anyway, Dudes is probable Penelope Spheeris's best-known picture. The music is extra-good and the portrayal of the Southwest USA is very realistic. This is guns and gods country and if you come there from New York you are likely to get shot, frankly. Gutsily in spite of the hard R Penelope opts not to show us any nudity, not even a bare male bottom. Because that's not what this movie is about.

J. E. HallReviewed in the United States on October 16, 2017
4.0 out of 5 stars
Thank you, Shout! Factory
Verified purchase
I hadn't watched DUDES in almost 30 years, so I am grateful to Shout! Factory for giving the film a Blu-ray release. I'm also very happy to say the movie is every bit as good as I remember. The picture and sound are solid, and the interviews are incredibly detailed (and fun). When Jon Cryer says he burned his VHS copy of DUDES onto a DVD for a fan at a local hardware store, I was truly moved.
8 people found this helpful

ThunderfunkReviewed in the United States on April 1, 2019
5.0 out of 5 stars
Finally! An excellent release for an excellent movie
Verified purchase
Just like Jon Cryer mentions in the interviews, I too had to transfer my old VHS copy to a DVD-R. Now, finally, Shout Factory has given this classic a proper release. This film is a cult classic underrated gem from the 80s and truly one of the best movies you never saw. This release looks and sounds great with lots of bonus interviews to sweeten the deal. If you're still holding on to your bootleg copy, throw it out and buy this today.

Psychedelic ShredderReviewed in the United States on January 16, 2021
5.0 out of 5 stars
Cool dudes in a loose mood with Vai in the sky
Verified purchase
This was an awesome movie with a killer soundtrack I remember renting it from a video store and later on finding out Steve Vai was on it made me buy the soundtrack it's amazing how long we've come since those days to everything back then was searched by getting in your car and driving to destination sometimes it's still fun to do that

Mark KaminskiReviewed in the United States on February 11, 2020
5.0 out of 5 stars
Classic movie with a ton of extras
Verified purchase
I am finally able to retire my VHS!
Great cult classic movie with tons of extras!

RReviewed in the United States on October 8, 2020
5.0 out of 5 stars
Worthy movie
Verified purchase
Remembered this as a need to see again movie from the 80's. Sort of like a new age easy rider. Definitely a worthy movie. I want to be a cowboy

ewhusky99Reviewed in the United States on October 29, 2018
4.0 out of 5 stars
Fun Movie to Watch
Verified purchase
It's from the 80's, so it is a little cheesy. It is a movie from when I was a kid that was fun to watch again.

PinealdoorwayReviewed in the United States on October 3, 2012
5.0 out of 5 stars
Dudes
Verified purchase
Dude this was a great flick, Again why is it not on DVD?
God only knows. It really is a catch your attention film with a lot of good acting & Action. Penelope Spheeris has done it again with "Dudes" and for those of you who have missed "Suburbia" a Cult Classic. Give it a look & check it out. This was filmed in LA ( California ) having been raised in So. Cal this is a typical LA film.
Kick back and Flash back when punk, Passion & Madness captured the Seventies & Eighties.