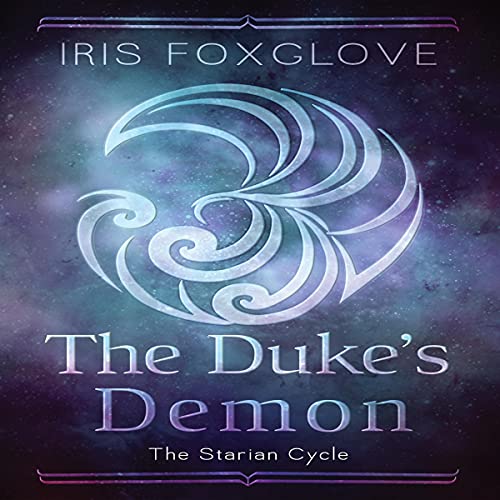 The Duke's Demon: The Starian Cycle

Iris Foxglove (Author, Publisher), Kris Antham (Narrator)
4.6 out of 5 stars 83 ratings
See all formats and editions
Sorry, there was a problem loading this page. Try again.

Devon Chastain has always been angry. He burns with it, is consumed by it, lashing out at friend and foe alike, and secures his reputation as a difficult noble son for all to see. Now that his family has betrayed the crown, Devon is a mess of emotion he can’t control, and he finds himself discovered by none other than Sebastien d’Hiver, the mad duke who, rumor says, once killed his entire family and sold his soul to a demon.

He will find, soon enough, that only the last half of the rumor is true. Sebastien d’Hiver is a man given over to the dark that is all he or his demon has ever known, and it isn’t until he drags Devon to the eerie country manor he calls home that he realizes that there’s more to life than pain. Soon, all three of them, noble, traitor, and demon alike, will find in each other the light they’ve all been missing.

Enjoy a free audiobook + more
Learn more about Membership
List Price: $19.95
You Save: $2.49 (12%)
By completing your purchase, you agree to Audible’s Conditions Of Use
Sold and delivered by Audible, an Amazon company
Share

4.6 out of 5 stars
4.6 out of 5
83 global ratings
How are ratings calculated?
To calculate the overall star rating and percentage breakdown by star, we don’t use a simple average. Instead, our system considers things like how recent a review is and if the reviewer bought the item on Amazon. It also analyzes reviews to verify trustworthiness.
Top reviews

M. D.
5.0 out of 5 stars Demons, redemption, and romance, oh my!
Reviewed in the United States on April 21, 2021
Verified Purchase
I kind of charged through this one. This story is all about Devon, who was an antagonist in book one, being taken to the abbey run by Sebastien d'Hiver, who is a duke possessed by a demon, trapped in a cycle of fear and violence ever since his family was killed. In fact, Sebastien, Devon, and Sebastien's demon are all trapped in cycles that they have to break out of, and it's really interesting to see how their journeys to healing overlap.

There's this theme throughout the book about how the Abbey calls people to it. Sometimes it seems like it calls violent people that Sebastien and his demon dispatch, but it also seems to call people who are lonely or in need of help, too, like Devon, Clara, or even an orphaned kid, who find safety there. It shows that even the Abbey isn't cut or dry evil or good, and that anyone can change and grow.

The main takeaway here is that none of the main characters are beyond redemption, and they all deserve love. I think that's my favorite part. Also, Sebastien and Devon's romance is so interesting! It really grows throughout the book!

This book has a smaller cast of characters than book one, but I think that's probably on purpose, since the character development feels so personal. I like the side characters, anyways. Clara is great, and I want to know everything about Polly!

K.P.
5.0 out of 5 stars So much love!! Even better than the first book!
Reviewed in the United States on May 16, 2021
Verified Purchase
Rarely have I read a series that gets even better with the second book. So many of them just become repetitive tropes that throw up secondary characters that become obliged to have a storyline simply because they exist. In this case the "villain" from the first book becomes a character you actually see grow, recover and bloom under the love and care of a human lord and his demon (in a healthy way). In fact, ALL the main characters have a well thought out character arc without any alpha-hole chest beating and unnecessary angst (just enough good angst).

There perhaps should be a trigger warning of implied sexual abuse in one of the characters childhood background, but it's implied and not explicit so it wasn't something that pushed my buttons.

Either way, I'm excited to see where Iris Foxglove goes. She's right up there with Megan Derr for me when it comes to M/M romance with depth and rich storylines that suck you in but don't leave you wrecked. And while there is sex, it's a little more NC-17 and biological imperative power exchange than blatant hardcore erotica. Personally I'm finding it a pleasing balance.
Read more
3 people found this helpful
Helpful
Report abuse

Christina Azariadou
5.0 out of 5 stars Redeemed hero level 100!
Reviewed in the United States on November 21, 2021
Verified Purchase
Trigger Warning because I didn't see it in the start of the story:
- Child sexual abuse (off page)

I do so love it when authors don't only manage to redeem a character but they are doing so in such a way that you are left with tears in your eyes for their behalf and rooting for their HEA!

Such a character is Devon which in the first book you either hated him or loathed him. But here, when his past comes to light... Both Chastain boys went through something no child should ever go through and Devon could process his trauma through anger, fury and rage towards his father, his brother and the world in general that failed so spectacularly to see what was happening, to provide a safe space. Not until Sebastien, a Duke carrying a demon, hunted him for he burned like an inferno and it called to Sebastien.

Sebastien lost his family, and almost his life, when men came to collect what his father owed them. When his mother shouted to him to run, he did, but towards the doors with no handles on the second floor of their home. Doors that were always closed but till that moment, when Sebastien was barely clinging to life and the darkness swallowed him.

This is such a heartbreaking, heartmending and heartwarming story of found family! And I have to say that I do so love and find befitting that Devon is a musician!!!

Now I'm gonna dive into Marius's story (Devon's older brother) because I want to see things from his perspective.

I received an ARC from Gay Romance Reviews and this is my honest review.
Read more
One person found this helpful
Helpful
Report abuse

Hannah
5.0 out of 5 stars So good!!
Reviewed in the United States on April 25, 2021
Verified Purchase
I think I liked this even better than the first in the series! It's a gorgeous tale of learning to love, with a gloriously haunting supernatural background. It's compelling and I honestly couldn't put it down! Read the first book in the series first - this picks up where that one left off. It's sensual and - dare I say - sweet, too!
Read more
One person found this helpful
Helpful
Report abuse

Obsidian88
4.0 out of 5 stars Sebastian, demon, and Devon
Reviewed in the United States on December 4, 2021
Verified Purchase
So this first started out creepy and dark. With talk of knives and blood I was thinking Devon was not going to make it very far in this story. But Sebastian and Devon managed to find something that Devon enjoyed and made Sebastians demon interested. It went from creepy to steamy to romantic and love. Both Sebastian and Devons.past were sad. In fact, demons past was sad too. And I forget demons name :( But this story was a other example of great world building and interesting characters. On to Prince Adriens story!!!
Read more
Helpful
Report abuse

Simon Crow
5.0 out of 5 stars even more compelling than the first and I loved that one
Reviewed in the United States on May 17, 2021
Verified Purchase
Everything I wrote about the first one* but with the addition of a redemption story/stories (catnip!) and essentially alien intelligence/learning. Fantastic.

Alexandria Quist
4.0 out of 5 stars Surprisingly sweet
Reviewed in the United States on May 8, 2021
Verified Purchase
I liked it better than the first. It was obvious even from the last book that there was something deeply DEEPLY disturbed about Devon Chastain, and finding out what it is is only a small part of what ends up making him such a sympathetic character.
Sebastian's demon is so adorable, strange, and interesting I can barely stand it.
Like I said, their coming together and self-discovery was unexpectedly sweet.
Read more
Helpful
Report abuse
See all reviews

Sue
5.0 out of 5 stars Don’t assume anything in this mm fantasy series
Reviewed in Canada on December 9, 2021
Verified Purchase
WOW WOW WOW. I loved the first book in this series and I didn’t see how the second one could top it, especially as it was about someone who was a traitor in the first book but Iris Foxglove did it. I adored this book that takes Devon, one of the bad guys from the first book and redeems him, sort of. Duke Sebastien and his dark demon take Devon in and the three of them go through a journey of self discovery together in Sebastien’s castle. Of course there is lots of D/s and bedroom activities all set in the fascinating culture that these authors have dreamed up. If you like dark mm fantasy with the heat dial set up high then you may just enjoy these books as much as I did.
Read more
Report abuse
See all reviews
Back to top
Get to Know Us
Make Money with Us
Amazon Payment Products
Let Us Help You
EnglishChoose a language for shopping. United StatesChoose a country/region for shopping.
© 1996-2022, Amazon.com, Inc. or its affiliates