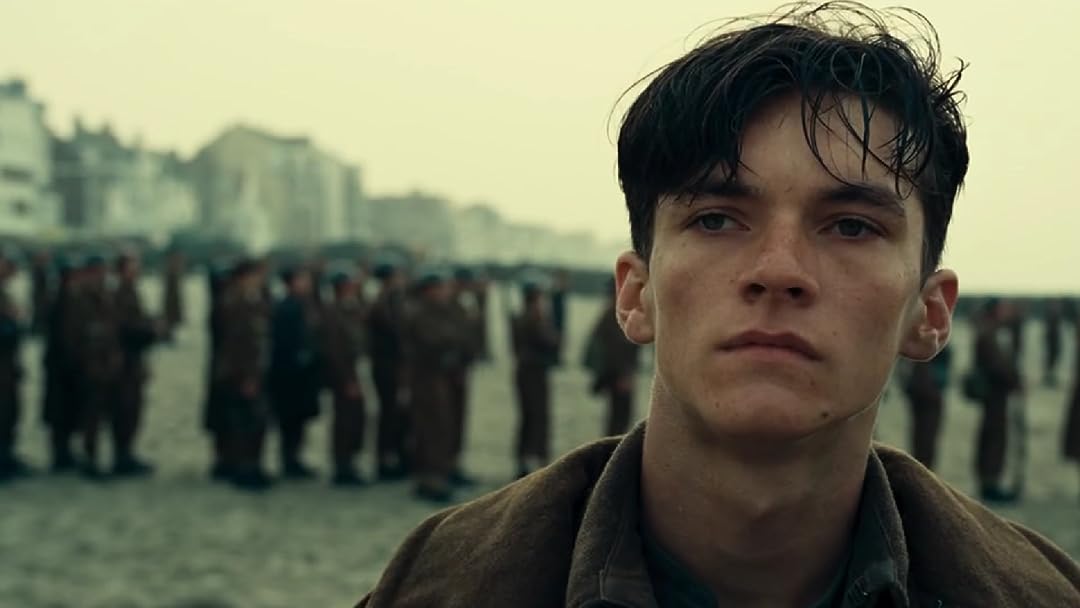 (17,957)7.81 h 47 min2017X-RayPG-13
Trapped on the beach with their backs to the sea, British and Allied troops are surrounded by enemy forces facing a fierce battle in World War II.

Colin LuckReviewed in the United States on February 7, 2018
5.0 out of 5 stars
Could not be more authentic
Verified purchase
This movie is so close to how my father told us about his escape from Dunkirk. He was a Royal Fusilier and my brother tells me that our father escaped the beach at Dunkirk with his platoon in an old tar boat (canvas stretched over a wood frame waterproofed with tar). It started leaking and 4 were rowing while 16 bailed. They got about a mile offshore and encountered a Naval lighter launch. They threw him a ball of rope which landed smack in the middle of his hand. They were then towed out another mile or two to a minesweeper HMS Leader and they scrambled up the torpedo nets to get aboard just in time to see the tar boat slip under the waves. Our father passed away 15 years ago and his name is in the church of St. Sepulchre-Without-Newgate on Holborn Viaduct. Wikipedia gives a comprehensive description of the church and it’s features including the Royal Fusiliers City of London chapel of rest along with the 6th Battalion City of London Rifles. When you enter the church from Holborn Viaduct the chapel of rest is on the right hand side when facing the altar. Our father’s name is engraved on the oak panelling on the outer wall. Our father went on to fight in the final stages of the African campaign in Tunisia. He was downgraded medically because of his osteoarthritic knees and placed on prison guard duty in Italy while the main battalion landed at Salerno and onto Monte-Cassino. He volunteered to join the expeditionary force to liberate Greece and landed at Kalamata in the Southern Peloponnese and stayed 6 months after the war mopping up communist partisans. I have included a photo of our father in the army.
871 people found this helpful
Report abuse

R. DonnellReviewed in the United States on January 25, 2018
5.0 out of 5 stars
2017's Dunkirk - An original and creative film
Verified purchase
I have watched virtually every WWII film ever made, but have never seen as an original masterpiece as Dunkirk. Those who are familiar with the history of the evacuation of the British army from the French beaches of Dunkirk in 1940 may have seen the past dry/unremarkable film and documentary versions recounting this event.This film is a complete 180 degree turn in both the visual and very intense soundtrack experience. The scenes in which we see the Spitfire pilot(s) in the cockpit and their unique aerial perspective(s) are poignant and memorable, to say the very least, even after several months since seeing the film. While most films present a 2 dimensional 'watching from a distance' experience, Dunkirk puts the viewer on the beach and in the cockpit of that Spitfire with the feeling of being a first-person participant. The result is a refreshingly unique take on a 'been-there-done-that' subject, and done in a way unmatched in modern war film history. The suble cinematic nuances that continue throughout this film are simply icing on an already well crafted cake.
184 people found this helpful
Report abuse

Russell SReviewed in the United States on January 6, 2018
5.0 out of 5 stars
Loved how understated the actors were as to give the event the starring role.
Verified purchase
I LOVED IT! I have read all the reviews that it was boring and slow.....I considered it a pot boiler. It built up for sure and to me as a history buff, I was fascinated in what seems to me to be a very factual and frightening telling of a terrible happening in History. I know the British consider it some kind of victory but it saddened me the massive loss of life and also the cost to the French, my heart went out to the French and the British alike. The British civilians who took to their pleasure crafts and went to the rescue is awe inspiring. That is the history of it. The scope of this production was massive and beautifully done. The actors were very much underdone as to give the actual event the starring role. I loved the actors and the acting and the direction and the effects which looked to me to be real as opposed to CGI. Bravo and Bravo.........
247 people found this helpful
Report abuse

JPDismeReviewed in the United States on November 10, 2018
1.0 out of 5 stars
Incoherent non-sequitors on a big screen
Verified purchase
I bailed out after 25 minutes of imagery in place of a story.. The only imagery that worked for me was that the unnamed soldier is trying to get the hell out of Dunkirk by pretending to rescue a wounded man. All of the other imagery is incoherent rambling. When the bombs start falling they barely disrupt a wooden pier, yet the same bombs fall on a steel vessel and go straight through the hull and sink it.... The boat as it sinks has it's left hull pressed against a pier with dramatic groaning timber noises. One second later its in deep water with no piers on either side and nothing but clear water a hundred feet on either side. Two seconds later it's at the bottom of the harbor.

Thankfully there is no dialog in this movie. I can only imagine how much worse it could have been if the dialog was as insipid as the directing.

William HowardReviewed in the United States on December 23, 2017
4.0 out of 5 stars
The Most REALISTIC recreation of Dunkirk... With a Cinematic Twist or 20!
Verified purchase
Reading all the other reviews covers all of my impressions - except one - THIS THING kept jumping back and forth between story-lines to the point I wanted to RE-CUT the movie into logical timelines (ADHD?). EACH story was exceptional, and as a pilot, the flying felt like I was in the cockpit (and drowning in a sinking plane!) BUT - almost all the actors had the same dark hair and features, and it took a while to realize I was seeing the same characters in several scenes - NOW, THEN, WHEN? Just confusing, until I caught on.

We watched the NatGEO documentary the night before, and the interesting points mentioned, such as the wharf made out of vehicles, was shown (very understated, but well done...) The discussion of the status of the French in the MOVIE would not have made much sense without watching the NatGeo first.

Mostly, I would say be prepared to watch it TWICE or MORE, so you can absorb the jumps back and forth in the action.

SUPERB acting, especially the yacht skipper, the older pilot, and the Rear Admiral.

THOUSANDS of extras....the Director mostly directed his legions - LOOK UP! DROP to the SAND. JUMP UP! RUN!

This is a story that still rings with the truth of the failure of Leadership, poor logistics, and the determination of Hitler, and what it meant to the world.

Can't wait for the new movie about Winston Churchill....

cyrusReviewed in the United States on December 18, 2018
1.0 out of 5 stars
a bad-dream TITANIC (but with NO character development)
Verified purchase
A hugely overrated film: essentially, a two-hour video game using history as its game board. Characters are all cardboard and, after about 1/2 hour, one really doesn't care what happens, partly because there are no real human beings to root for or so little background fill-in of what is happening. A few interesting special effects but even the actual locales where the movie is filmed are often poor in that many of the beachfront buildings are modernist structures built long after Dunkirk. If you want a REAL treatment of this event (and WWII broadly) watch the extraordinary tv miniseries WINDS OF WAR (1983) AND WAR AND REMEMBRANCE (1988). Though Dunkirk in this series is covered only briefly, the historical context and emotional impact are so much more powerful. Let this director go back to the MARVEL comic books. He needs to grow up before he tries another film like this. Use your fast-forward button: much of what happens can be sped ahead and little is missed.
28 people found this helpful
Report abuse

Biblio-NutReviewed in the United States on November 6, 2018
1.0 out of 5 stars
Horrible watching on the home screen.
Verified purchase
A number of films on the Dunkirk evacuation were done before the 2017 Nolan film. This rendition strives to show the heroism and horror of the evacuation from the point of view of land, sea and air. The emphasis is on cinematography and sound rather than plot. The original reviews highly recommended it be watched in an IMAX theater, where the visuals and sounds would have maximum effect on the viewer's senses. Otherwise in your neighborhood movie theater or worse, on your home screen, the movie is merely a series of disjointed scenes from the three perspectives, with little dialog or continuity. The overwhelming, persistent music soundtrack is an added irritant to watching this Dunkirk evacuation.
18 people found this helpful
Report abuse
See all reviews
Back to top
Get to Know Us
Make Money with Us
Amazon Payment Products
Let Us Help You
EnglishChoose a language for shopping. United StatesChoose a country/region for shopping.
© 1996-2021, Amazon.com, Inc. or its affiliates