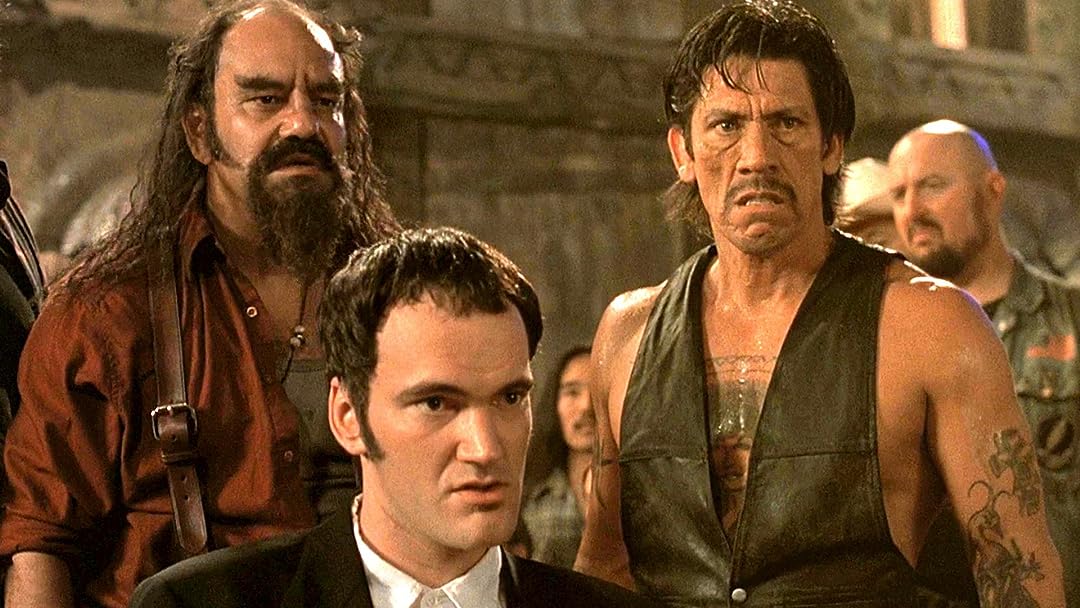 From Dusk Till Dawn

(6,215)
7.21 h 48 min1996X-RayR
A pair of fugitives takes a vacationing family hostage, then ends up trapped in a backwater biker bar under siege by vampires. Harvey Keitel, George Clooney and Salma Hayek star in this cult classic horror thriller.

joel wingReviewed in the United States on August 25, 2020
4.0 out of 5 stars
1st part of the movie doesn't quite work then turns into a classic vampire tale
Verified purchase
From Dusk Till Dawn brought together good friends Robert Rodriguez as director and Quentin Tarantino as writer and actor. It was an attempt to mix a crime flick with a vampire movie. The movie featured George Clooney as Seth Gecko and his brother Richie played by Tarantino. Richie just broke Seth out of jail and they were trying to make their getaway to Mexico. They kidnap a family led by Jacob Fuller (Harvey Keitel), his daughter Katherine (Juliette Lewis), and his son Scott (Ernest Liu) to get across the border. The Geckos are supposed to meet their hook up at the Titty Twister bar, but it turns out to be a vampire club. The movie is about faith and survival. The Geckos and Fullers will need faith in each other and God to survive the night.

The first part of the movie focuses upon the Geckos and the Fullers. I have to say I’m not quite sure this was necessary. The story doesn’t really take off until they arrive at the club. The start mostly emphasizes how much of a freak and menace Richie is.

The Titty Twister is the real star of the film. It’s completely over the top. There’s a man outside talking about all the different women they have by referencing how their private parts are. Then Selma Hayek gives a one in a lifetime dance and then turns into a vampire and the fun begins. The story then focuses upon whether the Geckos and Fullers can survive. What were two inoperative families have to come together as a unit to fend off all their attackers. It’s a great addition to the vampire genre.
C

The NOLA Review GuyReviewed in the United States on July 28, 2019
1.0 out of 5 stars
Great Movie but poor version from Amazon
Verified purchase
I love this movie but the sound quality was so poor, it was almost unwatchable. My wife and I are huge Quentin Tarantino fans and had just seen "Once Upon a Time In Hollywood" ( which was awesome by the way ). On the drive home we were talking about my favorite Tarantino films. While Tarantino didn't direct it he both wrote the screen play and stars in it. She had never seen it. When we got home I rented it from Amazon. I really feel ripped off because the sound was so low in parts of the movie we couldn't hear it with the TV volume all the way up. What a waste of money. I will think long and hard before renting a movie from Amazon again.
12 people found this helpful

demonsRendangeredReviewed in the United States on July 28, 2021
4.0 out of 5 stars
Great flick but....
Verified purchase
From Dusk Til Dawn is an enjoyable movie for me. I think what makes it unique and appealing is how the movie starts with George Clooney and Quinten Tarantino as criminals on the run but after a little over half way through the movie it turns into an over the top vampire horror setting. It's such a bizarre twist for a plot but they pulled it off well. It's very much a dark humor theme, nothing really scary about it.

I do want to note though that this movie seems to be another unfortunate victim of an Amazon streaming audio level bug. Or something like that, I'm not sure what the deal is but this is the 2nd movie I've watched on Amazon where the audio levels are all messed up. In some scenes you can barely hear what people are saying and in other scenes the sound effects and music are too loud. It's very unbalanced and I know for a fact that the film was not originally like this. And it's not my hearing either, I've watch plenty of Amazon movies, have a fairly sized library of purchases and this movie along with Tales From the Crypt: Demon Knight have this problem. I see that another reviewer also mentioned this so hopefully Amazon can look into it and have it fixed.

Other than that it's a great flick but if you haven't seen it before and you really want to understand every piece of dialogue in the movie then you might want to turn subtitles on if you're streaming it on Prime.

Mikey RdoriguezReviewed in the United States on August 23, 2019
5.0 out of 5 stars
Robert & Quentin love child
Verified purchase
I'm so happy to recieve this item, I myself am a really big fan of from dusk till dawn and it's my top favorite movie for many reasons besides the story itself. When I bought the bluray before it didn't come with any features besides play and subtitle and I was kinda upset. But now having this steelbook with features and DVD combo I'm in love with it!!! Plus the steelbook design is amazing, it's so beautiful I can't stop staring st it whenever it catches my eye. For the film itself, I love the story or two criminals on the run, takes family hostage, and now from a crime drama to a blood soaked, body parts on the wall gore fest of a vampire movie that just won much heart. It's a fun grindhouse horror that I say give it a shot if you want something fun to watch.
5 people found this helpful

ClintClintReviewed in the United States on July 16, 2016
5.0 out of 5 stars
CLASSIC FILM.
Verified purchase
There are some movies that have no explanation for how or why they were made. This movie might fall into that category, it is a film that is an homage and yet also a perfect film that encapsulates the genre. The movie is a heist hostage type Bonnie and Clyde film that falls into another genre, though most heist films end this way this movie jumps genre into something completely different tongue and cheek firmly in place.

If you haven't seen this movie, watch it.

If you have, watch it again, this film should be considered a classic along with ROADHOUSE, COCKTAIL, LETHAL WEAPON, NAKED GUN, or DAWN OF THE DEAD. It is an entirely enjoyable film that is watchable, it is also a commentary on films if you want to watch it for those reasons.

I think whether you are a 14 yr old boy or a 45 year old woman you will enjoy this film.
12 people found this helpful

Canaan House LibrarianReviewed in the United States on November 1, 2022
4.0 out of 5 stars
A Little Bit of Bad Aging But Still Good
Verified purchase
Everything with Quentin Tarrantino’s character just has not aged well. I’d say this is a cult classic despite those scenes. That being said, I didn’t remember this movie being this funny, and it is deliberate in its humor. And The dance scene with Salma Hayek is still iconic!

SteveReviewed in the United States on October 19, 2000
3.0 out of 5 stars
Dusk till Dawn Collector Series DVD review
Verified purchase
The commentary from the director and writer was very verbose. They rarely talked about the scenes. This was a commentary that was easier to listen to if you weren't actually watching the movie. Scenes would trigger memories of events happening as they were making the movie and they would go off on tangents for long periods. Although the stories they relate are interesting, I'd prefer they actually talked about scenes in the movie. Another drawback to the commentaries was you couldn't change them by using the `Change Audio' button, but had to change it at the main menu. Since you couldn't hear the dialogue during the commentary, it would have been nice to be able to easily switch back and forth. The full-length documentary film `Full Tilt Boogie' was interesting and showed what it was like shooting the film. This comes on a completely separate DVD. The name of the documentary comes from a line one of the crew uses to describe the shooting of the film. The gallery stills run very fast and aren't that interesting. The music videos include the song used for Salma's dance. This is just lifted from the film and some other shots from the film are intercut, but nothing new. The Zztop song is included and features Clooney and Salma in a completely different location. It looks like someone's expense house. The plot for the video isn't very interesting. The outtakes are mainly actors not getting their lines right and aren't funny. The cut scenes aren't very interesting either. The longest one being a much more graphic and gross bar fight scene which even I couldn't stomach. The director also gives commentary on how he shot the opening scene and the bar fight scenes. This was along the lines of his commentary for `Desperado', only not as good. Finally the a 30-minute featurette is also included and gives some more interviews with the cast and crew, some scenes are lifted from `Full Tilt Boogie.' Overall, I'd say if you have this film on the previously released DVD, I wouldn't bother replacing it. There is nothing interesting enough that is added.
4 people found this helpful

Daniel A. FosterReviewed in the United States on December 6, 2009
5.0 out of 5 stars
Fun Vampire Stuff!
Verified purchase
George Clooney (BATMAN & ROBIN), Harvey Keitel (RESERVOIR DOGS), Quentin Tarantino (PULP FICTION), Juliette Lewis (CAPE FEAR), Salma Hayek (DESPERADO), Tom Savini (DAWN OF THE DEAD), Fred Williamson (SILENT HUNTER), Danny Trejo (THE DEVIL'S REJECTS), Cheech Marin (CHEECH & CHONG'S UP IN SMOKE), Kelly Preston (TWINS), John Saxon (A NIGHTMARE ON ELM STREET), Michael Parks (STRANGER BY NIGHT), John Hawkes (NIGHT OF THE SCARECROW) and introducing Ernest Liu star in the Tarantino/Rodriguez classic; FROM DUSK TILL DAWN. The plot is 2 brothers on the run from the law trying to go to Mexico, in hiding. They encounter a preacher and his 2 kids. The brothers hijack the preacher's RV and go to the Titty Twister bar in the outskirts of Mexico. Before they can save Richie, one of the brothers, they discover the bar is owned by vampires. Now the preacher, Richie's brother; Seth, the preacher's kids, a Vietnam vet and a biker with a gun strapped to his crotch must stop the vampires before they unleash death in Mexico. This movie is full of gore and fun violence, give it a viewing, I beg of you. Infinity out of 5 star rating.
2 people found this helpful
See all reviews
Back to top
Get to Know Us
Make Money with Us
Amazon Payment Products
Let Us Help You
EnglishChoose a language for shopping. United StatesChoose a country/region for shopping.
© 1996-2022, Amazon.com, Inc. or its affiliates