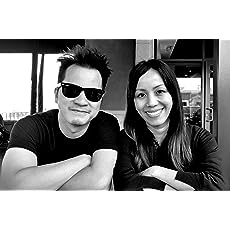 Currently, Dustin illustrates Descender, a monthly comic published through Image Comics in which he is also co-creator of, alongside artist/writer Jeff Lemire. He is also working on the next installment of Scholastic's Secret Hero Society as well as Lil' Gotham for DC Comics with Derek Fridolfs, slated to release next year.

WHAT IS IT is his first children's book, illustrated by Dustin and written by his wife Nicole Hoang as a child in 5th grade. It is produced by BOOM! Studios and distributed by Simon & Shuster.

His past body of work includes - Wildcats v3.o, The Authority Revolution, Batman, Superman/Batman, Detective Comics, his creator owned project- Manifest Eternity, Batgirl, and Batman: Streets of Gotham. He is also credited for co-writing and illustrating Justice League Beyond , illustrating Vertigo's American Vampire: Lord of Nightmares with writer Scott Snyder, and co-creator of DC's all ages series- BATMAN: Lil Gotham written by himself and Derek Fridolfs. Aside from providing cover illustrations for the majority of his own books, his cover art can also be found on titles from Batman Beyond , Batgirl, Justice League: Generation Lost, Supernatural and Friday the 13th, to numerous other DC, Marvel, Darkhorse, Boom, IDW, and Image Comics.

Outside of comics, Dustin also moonlights as a conceptual artist for toys and consumer products, games, and animation.

He enjoys sleeping, driving, and sketching things he cares about.
Read more 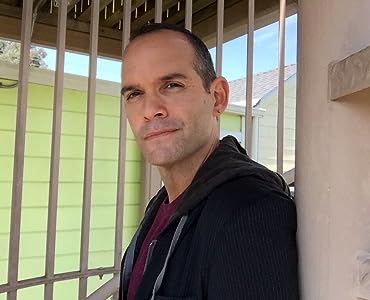 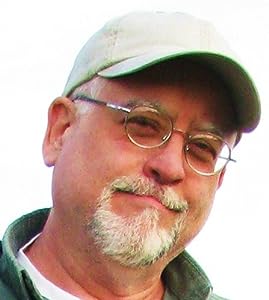 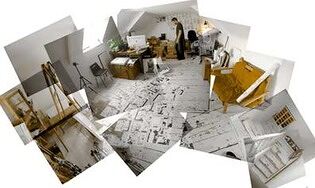 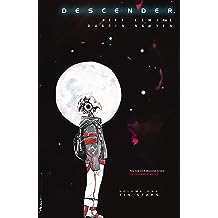 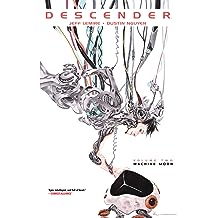 Descender Vol. 2 May 4, 2016
by Jeff Lemire , Dustin Nguyen
( 225 )
$11.39
Young robot boy TIM-21 and his companions struggle to stay alive in a universe where all androids have been outlawed and bounty hunters lurk on every planet. DESCENDER is a rip-roaring and heart-felt cosmic odyssey, pitting humanity against machine and world against world to create a sprawling epic. Collects DESCENDER #7-11
Read more
Other Formats: Paperback 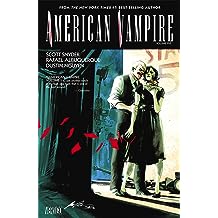 American Vampire Vol. 5 Dec 2, 2014
by Scott Snyder , Rafael Albuquerque , Dustin Nguyen
( 122 )
$9.99
In the first story, series mainstays Skinner Sweet, Pearl and company return to Hollywood in the '50s during the Red Scare. In a time where America was on the lookout for the next Communist threat, was the real danger something far more insidious? A major turning point in AMERICAN VAMPIRE lore begins here!

In the second tale, familiar face and vampire hunter Felicia Book is "retired" from vampire hunting when she gets called back into action to track down and kill the most powerful vampire of all time. The hunt takes our heroes through post-war Europe, behind the Iron Curtain and into the heart of Russia to track this deadly enemy... 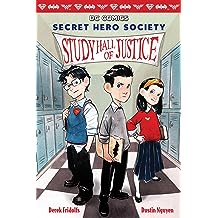 Young Bruce Wayne is the new kid at Ducard Academy, a prep school for gifted middle school students. Bruce finds out pretty quickly that he doesn't fit in: the faculty seems to not just encourage villainous behavior from its students, but reward it. He makes friends with two other outsiders, farm boy Clark Kent and the regal Diana Prince. The three band together to form a detective squad to find out why all of these extraordinary kids have been brought together at Ducard Academy, and to see just what the faculty is plotting.

An all-new series from the Eisner-nominated team behind Batman Lil' Gotham (Dustin Nguyen and Derek Fridolfs), Secret Hero Society uses comics, journal entries, and doodles to reimagine Batman, Superman, and Wonder Woman as three students in the same school. They'll try their best to solve their case, but just because you're faster than a speeding bullet, more powerful than a locomotive, or an Amazonian princess, it doesn't mean you get to stay up past eleven.
Read more
Other Formats: Hardcover , Paperback 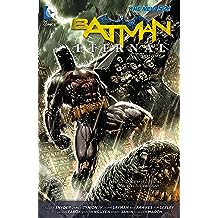 Batman Eternal (2014-2015) Vol. 1 Dec 2, 2014
by Scott Snyder , Jason Fabok , Tim Seeley
( 214 )
$26.56
A new weekly Batman series that examines the relationship between the heroes, villains, and citizens of Gotham City! In the wake of Forever Evil, the world looks at heroes in a different light, creating tension between Batman and his allies and the Gotham City Police Department. When a gang war breaks out and new villains arise, it''s up to the Dark Knight, Batgirl, and more to turn the tides as best as they can--but will the GCPD be a help or a hinderance? Plus, a fan-favorite character makes her long-awaited DC Comics--The New 52 debut. Collects BATMAN: ETERNAL issues #1-21.
Read more
Other Formats: Paperback , Comic Book 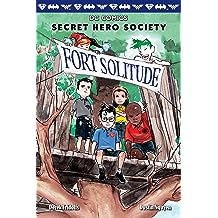 Fort Solitude (DC Comics: Secret Hero Society #2) Dec 27, 2016
by Derek Fridolfs , Dustin Nguyen
( 144 )
$7.99
The follow-up to the bestselling hit Study Hall of Justice! Clark Kent is thrilled when he receives an invite to a spring break academic retreat. After taking down the villains of Ducard Academy the previous year, going back to life on the farm was a bit dull. Better yet, his friends Bruce and Diana have been invited there, too! What better way to spend spring break than with old friends (Poison Ivy, Harley Quinn) and new ones like Arthur Curry (Aquaman), Barry Allen (the Flash), and Vic Stone (Cyborg)?

When Clark arrives at Camp Evergreen he makes new friends, reconnects with old ones, and nothing seems weird at all! Well, that is until kids start disappearing... One by one... Plus, there's a lake monster, bigfoot has been spotted, there are reports of a boogeyman, and there may or may not be a UFO crashed into the lake. Clark, Bruce, and Diana will have to re-assemble the Junior Detective - er- Criminal Investigation Unit, in an all-new, supernatural adventure!
Read more
Other Formats: Hardcover , Paperback 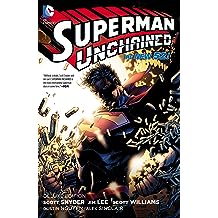 From the skies above Metropolis to the four corners of the globe to the star-streaked spaceways beyond, one man is synonymous with the word "hero." Since his arrival marked the dawn of the superhero age, Superman has waged a never-ending battle for truth and justice, no matter when or where. But before the dawn came the darkness. When another with incredible power, far more than that of mortal man, fell to the Earth. One who could spell the end for the Man of Steel. From the mind of superstar writer Scott Snyder (BATMAN: ZERO YEAR) and legendary artist Jim Lee (JUSTICE LEAGUE) comes SUPERMAN UNCHAINED--a widescreen, cutting-edge take on the hero who started it all! Collects SUPERMAN UNCHAINED #1-9 and material from SUPERMAN UNCHAINED DIRECTORS CUT #1.
Read more
Other Formats: Hardcover , Paperback 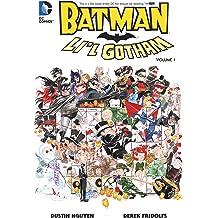 Batman: Li'l Gotham Vol. 1 Jan 8, 2013
by Derek Fridolfs , Dustin Nguyen
( 71 )
$9.99
"These gorgeously drawn and painted all-ages tales feature all of your favorite Gotham City characters: Batman, Robin, Nightwing, Catwoman, The Joker, The Penguin and many others!

First up, Robin needs Batman's help to learn the true meaning of Halloween. Then, on Thanksgiving, Batman and Robin join the families of Gotham City around the table for a holiday feast--and birds of a feather flock together to stage a march against the city...led by The Penguin! As Christmas time approaches, the search for a missing holiday choir leads Batman and Nightwing into a confrontation with Mr. Freeze! But in this heartfelt Christmas tale, the frozen fiend's motives aren't as nefarious as they seem...
And on a festive New Year's Eve, Catwoman thinks she'll be spending a quiet night at home, contemplating her New Year's resolutions--until Poison Ivy and Harley Quinn show up, that is! 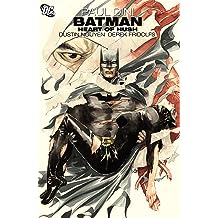 Batman: The Heart of Hush (Detective Comics (1937-2011)) Feb 18, 2012
by Paul Dini , Dustin Nguyen
( 229 )
$9.99
The villain named Hush, created by comic superstars Jeph Loeb and Jim Lee, makes a dramatic return to the life of Batman. What will this mean for Bruce Wayne? Secrets shared years ago between Bruce Wayne and Tommy Elliott begin to have dangerous repercussions in the present. Why is this mystery driving Hush to destroy Batman's life? What part does Catwoman play in Hush's plans? Collects DETECTIVE COMICS #846-850.
Read more
Other Formats: Hardcover , Paperback 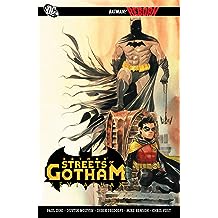 Batman: Streets of Gotham Vol. 2: Leviathan Aug 21, 2012
by Paul Dini , Christopher Yost , Mike Benson , Dustin Nguyen
( 27 )
$9.99
The 2-part 'Leviathan' story kicks off from guest writer Chris Yost (RED ROBIN) as The Huntress finds herself in an unusual position--the responsible one. Because when Huntress hunts down a violent new criminal, she finds herself stuck with aviolent, loose cannon of a partner on the case--the Man-Bat! And in a special story from Mike Benson (Deadpool: Suicide Kings, Moon Knight), Batman and Robin uncover a sinister plot involving dozens of Gotham City's young runaways. Is Arkham Asylum escapee Humpty Dumpty at the center of the scheme - or is he just the tip of an even more dangerous iceberg? 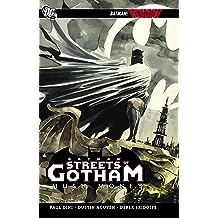 Batman: Streets of Gotham Vol. 1: Hush Money Aug 14, 2012
by Paul Dini , Dustin Nguyen
( 35 )
$9.99
How will the police feel about this new Batman - and can he control the crime in Gotham the way the old Batman did? Commissioner Gordon's about to find out as teams with the new Batman to combat the fiery threat that Firefly has spread across Gotham City. Then, Bruce Wayne has seemingly returned, promising to lead his city into a new golden age. But while this phony devotes his fortune to rebuilding Gotham City, he fights violent opposition from Batman, Robin and a host of DC Universe heroes! 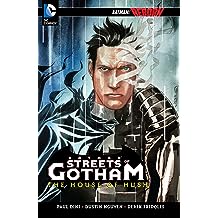 Batman: Streets of Gotham Vol. 3: The House of Hush Aug 21, 2012
by Paul Dini , Derek Fridolfs , Dustin Nguyen
( 16 )
$9.99
Paul Dini and Dustin Nguyen deliver an exciting continuation of the saga of Tommy Elliot and Bruce Wayne in this highly anticipated sequel to HEART OF HUSH. Cracking under the strain of living as 'Bruce Wayne,' Elliot plans his final, murderousrevenge on Dick Grayson, Selina Kyle and other members of Wayne's extended network of friends and allies. Will Dick and Damian be enough to thwart Tommy's plan--or will the end of Hush require the return of Bruce Wayne? This volume colllect BATMAN: STREETS OF GOTHAM #12-14 and #16-21.
Read more
Other Formats: Paperback