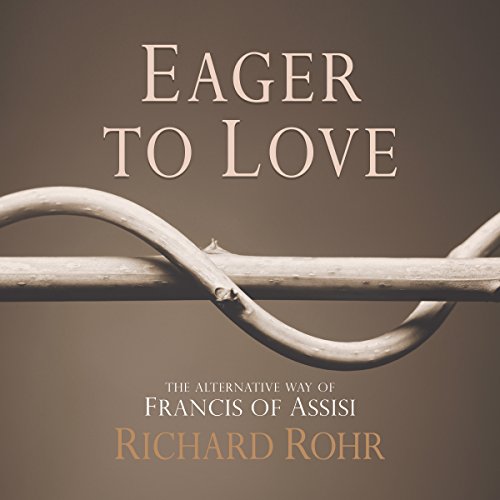 Eager to Love: The Alternative Way of Francis of Assisi

Francis of Assisi is one of the most beloved of all saints. Both traditional and entirely revolutionary, he was a paradox. He was at once down-to-earth and reaching toward heaven, grounded in the rich history of the Church while moving toward a new understanding of the world beyond. Francis found an "alternative way" to follow Jesus, one that disregarded power and privilege and held fast to the narrow path of the Gospel.

Franciscan Father Richard Rohr helps us look beyond the birdbath image of the saint to remind us of the long tradition founded on Francis' revolutionary, radical, and life-changing embrace of the teachings of Jesus.

Enjoy a free audiobook + more
Learn more about Membership
List Price: $27.99
You Save: $9.00 (32%)
By completing your purchase, you agree to Audible’s Conditions Of Use
Sold and delivered by Audible, an Amazon company
Share

4.7 out of 5 stars
4.7 out of 5
547 global ratings
How are ratings calculated?
To calculate the overall star rating and percentage breakdown by star, we don’t use a simple average. Instead, our system considers things like how recent a review is and if the reviewer bought the item on Amazon. It also analyzes reviews to verify trustworthiness.
Top reviews

Adams Thompson
5.0 out of 5 stars Left the faith, not because of what it says it believes, but because it doesn't believe any of it deeply and fully enough?
Reviewed in the United States on November 8, 2014
Verified Purchase
If you're a sincere, recovering bible-holic, cradle Christian like I am, the wisdom of Saint Francis and Richard Rohr will help you find your way home for the first time, with no regret for where you've journeyed, each step necessary for the transforming of both mind and heart. The American evangelical church has little resemblance to Christ - its own huge log in the eye - even as it's continually buttressed its own power and wealth, in part by casting great judgments about the relative specks in the eyes of all others. Many within it sincerely "worship" Jesus, which Christ never asked us to do, but aren't taught how to follow Him - the harder/deeper path, certainly. When you awaken to find yourself within nothing more than this generation's version of the Pharisees of Jesus' own day, it's tempting to throw the baby out with the bathwater. For a couple years I couldn't stand to read the bible I'd read with passionate devotion (and religious pride) literally dozens of times before. I began to wonder if God wasn't oh-so-much-more organically present in all our lives and in all of His creation than I'd ever had the eyes to see. God, through Francis, Rohr and others, has led me "back home" to where I've never been before. I've rightly abandoned the inadequate faith of my youth, not because of what it says it believes, but because it doesn't believe any of it deeply and fully enough: that we really do live, move and have our very being in God! Come to the table with Francis and Rohr - this is better than any feast you've ever imagined, even in your wildest, spiritual dreams.
Read more
96 people found this helpful
Helpful
Report abuse

Trailwulf
5.0 out of 5 stars Rohr Never Disappoints
Reviewed in the United States on August 5, 2020
Verified Purchase
This is a book for those Christians tired of the pablum in many so called "religious books." He tells the essence of Francis of Assisi's counter culture life and how that was a rediscovery of the essence of the Jesus Christ event in history and its legacy that has to keep being rediscovered. This is not philosophy, dogma, or apologetics for some fixed and unchanging religious practice. It is a how to, at base, of contemplative prayer and the inner transformation that may come about if it is embraced. In fact, those who have been turned off by the immature forms of Christianity just may find within themselves the wisdom that could not embrace those distortions and want to consider what truth and appeal a more mature presentation of faith and practice might have for them.
Read more
7 people found this helpful
Helpful
Report abuse

HS
5.0 out of 5 stars Great Kindle Book to Read on Your Spiritual Journey
Reviewed in the United States on September 26, 2014
Verified Purchase
This was a very enlightening book. I found myself unable to put it down. Richard done a great in answering some of the basic questions about many areas of religion and spirituality that I had. For those who are seeking a deeper understanding of spirituality, this book is for you. Sure it is great to go to church and get the messages taught by those who foster community in living a spiritual life, however there is not a lot of teaching on that very intimate walk with the Holy Spirit. Richard lays out a method to achieve that deeper self knowing that the spirit is alive and well. I felt more like getting to know Christ, and the Holy Spirit in a closer, deeper, personal way. Richard Rohr does a great job of motivating one to take that deeper walk. He also uses scripture to help one understand that this closer walk is very scriptural. I really enjoyed his expose on Franciscan Spirituality. For those who are seeking this would be a great book. HS
Read more
67 people found this helpful
Helpful
Report abuse

Marty Kraus
5.0 out of 5 stars The lonely journey traveling without someone telling you what to do or value through organized religion.
Reviewed in the United States on December 20, 2016
Verified Purchase
Richard Rohr is one of my favorite writers. I can meditate on what he has to say and feel that gradually it begins to make more and more sense to me. I need to lay aside my ego however, which is an off and on again thing. As an older person, it is time for me to grow or get old by turning lose of what I valued most of my earlier life. It is not an easy read, but one that goes to the heart of being human.
Read more
25 people found this helpful
Helpful
Report abuse

changingspiritbw
2.0 out of 5 stars Fragmented and vague
Reviewed in the United States on March 2, 2019
Verified Purchase
Hmm. There are some fine concept in this book concerning a frame of reference on living. Very linear and well said.
There was a lot of intellectual "Yes but" moments.
Gently bitching about the Church and then defending it's vain and special position.
Acknowledgement of hypocrisy but then a sort of OH WELL it's all a mystery stance.
So you're part of an organization, use it to benefit yourself, and then distance yourself from what you don't like.
So leave, buy your "I am poor too" clothes at Salvation Army, and leave the raft at the shore or not.
Read more
8 people found this helpful
Helpful
Report abuse

Brent Mc
5.0 out of 5 stars This book shines bright...
Reviewed in the United States on March 7, 2018
Verified Purchase
For those interested in growing spiritually and deepening their faith, this book is like a light on the path. It is full of wisdom and valuable insight into the way of Francis of Assisi and those who have followed. I particularly liked that Fr. Rohr has brought together a great deal of his own thought and insight from many years into this work. It is a great contribution to mysticism and contemplative thought as they relate to the Christian faith.
Read more
11 people found this helpful
Helpful
Report abuse

Joy Lenton
4.0 out of 5 stars A fresh perspective
Reviewed in the United Kingdom on May 3, 2016
Verified Purchase
Richard Rohr is one of my favourite authors. I love his slant way of seeing, his perceptions of faith and its working out in our daily lives. Here he takes an in-depth view of a well known, beloved Christian saint and brings him to life in a refreshing way. Francis of Assisi is not only associated with a truly practical theology and a mystical way of relating to God's creation, he is also Founder-friar of the Franciscan movement to which Richard Rohr himself belongs.
Therefore it is with an insider eye, an appreciation for history and a determination to root St Francis in reality that this book is written. This is a fresh, imaginative approach that shows us the man behind the cassock, the heart behind the legend and the truth sitting side by side with myth.
It's a book that demands focussed attention and savouring in small chunks at a time because of its depth. Rohr may malign his own mind at times but this is a meaty read, not for the faint-hearted.
Although Francis of Assisi is the major character here, you will also find other significant souls who fed into his spirituality and influenced his orthodoxy. All serve to introduce the reader to a way of being, seeing and sensing that opens them up to new ways of thinking.
This is rich stuff, redolent with resources, quilted with quotes and notes. In the unlocking of a life, you may find yourself looking at St Francis with new eyes and also seeing how you could live differently in response to all that's revealed. A profound, learned read that may just unsettle you into a fresh spiritual perspective.
Read more
14 people found this helpful
Report abuse

allan brotherton
5.0 out of 5 stars Eager to.love
Reviewed in the United Kingdom on September 2, 2019
Verified Purchase
RICHARD ROHR ONCE AGAIN ILLUSTRATES THE REAL.NATURE OF GOD NOT THE ANGRY JUDGEMENTAL ONE PORTRAYED BY FUNDAMENTAL CHRISTIANS, BUT A LIVING PATIENT GOD WHO GIVES LIFE TO ALL CREATURES AND CREATED THIS UNIVERSE OVER BILLIONS OF YEARS TIME IS OF NO IMPORTANCE TO GOD WHO HAS ETERNITY AT HIS FINGERTIPS.
Read more
3 people found this helpful
Report abuse

Ginny
5.0 out of 5 stars Richard Rohr is a brilliant Christian teacher
Reviewed in the United Kingdom on January 21, 2018
Verified Purchase
Richard Rohr is a brilliant Christian teacher. I have many of his books. Eager to love is based on the teachings of St Francis of Assisi and how that can evolve for us today. If you are interested in joining in the divine dance this book will help you and inspire you.
Read more
6 people found this helpful
Report abuse

Amazon Customer
4.0 out of 5 stars OK
Reviewed in the United Kingdom on April 2, 2019
Verified Purchase
Special
Read more
One person found this helpful
Report abuse
See all reviews
Back to top
Get to Know Us
Make Money with Us
Amazon Payment Products
Let Us Help You
EnglishChoose a language for shopping. United StatesChoose a country/region for shopping.
© 1996-2022, Amazon.com, Inc. or its affiliates