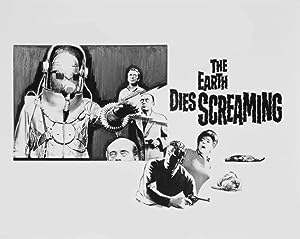 AmazonianReviewed in the United States on December 10, 2019
3.0 out of 5 stars
A Feast for Mid-20th Century Sci-Fi Film Buffs
Verified purchase
I enjoyed the two films because I am an incurable sci-fi nut. One gets a feast of the great work of Bradford Dillman, Alex Cord, and Richard Jaeckel in "Chosen Survivors," a post-Watergate era pessimistic story of American governmental dishonesty along with the horror of a myriad of blood sucking bats wiping out the "survivors" of a nuclear holocaust. There are inspiring, heroic actions of human self-sacrifice that supplies light at the top of the vertical tunnel. "The Earth Dies Screaming" offers a scenario that is very similar to those faced by Doctor Who. The two films' weaknesses are evenly balanced with their strengths.
One person found this helpful

Anton PhibesReviewed in the United States on October 29, 2013
5.0 out of 5 stars
Two Views of Doomsday
Verified purchase
To have both of these films in such a superlative package and with high quality transfers is remarkable in itself...

CHOSEN SURVIVORS (1974) offers a unique post-apocalyptic premise: When Doomsday comes, what will happen to the little society that survives? Will they survive TOGETHER? Will they survive EACH OTHER? Buoyed up by talents like Bradford Dillman (Escape from the Planet of the Apes, The Mephisto Waltz), Jackie Cooper (Our Gang comedies, Superman), and Diana Muldaur (Star Trek, The Rockford Files, Gunsmoke), Lincoln Kilpatrick (The Omega Man, Soylent Green), the film looks great, is fun to watch, and largely lives up to its purpose - depicting sociological implications of survival. It's not quite so heady, but the film is atmospheric in its own way - I love the subterranean mood and the musical ambiance, heightened by the contentious interplay of the characters, especially the scenery-chewing Jackie Cooper.

THE EARTH DIES SCREAMING (1964) is one of those British horror gems that evokes, merely through its superb black and white photography, a mood of foreboding. It is helmed by HAMMER royalty, Terrence Fisher (Curse of Frankenstein, Horror of Dracula) which, by itself, lends sufficient bona fides to the film. After an alien invasion, robots threaten rural England. They are a slow menace, much like Night of the Living Dead's walking cadavers, but instead of the undead we have a mechanized threat. The story consists in seeing what happens when we throw a random selection of ordinary folks together into the crucible of dire circumstances. Like the first film in this double-bill, the characters must survive each other if they are to survive the ostensible danger.

A HIGHLY recommended two-fer in the brilliant, collectible, and value-packed Midnite Movies series.

willwriteReviewed in the United States on June 11, 2014
4.0 out of 5 stars
Double the Horror
Verified purchase
This dvd edition of Midnite Movies presents two end of the world theme films.
Chosen Survivors deals with strangers whisked away from their lives to an underground government facility at the start of a nuclear war. Alas, the facility is not entirely safe. Jackie Cooper plays a businessman furious at the situation and Alex Cord is a writer overwhelmed with the responsibilty of repopulating the earth. They sort of stand out in the ensemble cast. Tension quickly arises between the selected survivors and plays out throughout the film. The movie was made in the 70's when nuclear annhilation was a popular subject for filmmakers. As an older sci-fi fan I enjoy seeing a movie from that era. There's no cgi to fall back on. The computers are massive and the facility's corridors are the kind common for films of that era.
The Earth Dies Screaming is an older B&W British treatment of an alien invasion which has resulted in mass disappearences.
Both films rely on the strength of its actors (who are pretty good) and fast paced scripts dealing with desperate situations. A nice combo.
3 people found this helpful

Michael David MullettReviewed in the United States on January 9, 2014
5.0 out of 5 stars
Once A Long Time Ago...
Verified purchase
Once, A Long Time Ago, I saw "The Earth Dies Screaming" On Sammy Terry's "Nightmare Theater", as It was Called! I really did Not Remember Much about the Movie, Other than the Strange looking Robots Going around trying to Obliterate Everyone They Found, Or the Fact that Their killed Victims Came Back from The Dead and Were Controlled By The Same Signal that Controlled THEM! This Movie Is one of The 60's Gems and A Must See, Kind of Like the Movie "Target Earth (1954)" Only I Think the Robots Are Much More Creepy In This Movie. So Do Yourself A Favor, and Get This Movie, and Watch it Alone with the lights off! That way The Robots will Miss You!

The Other Movie was, a Movie of the Week, I Think, and I'm not sure if I saw it or Not! Another End of the World By Nuclear Destruction, but, it was a nice Extra!
2 people found this helpful

DashReviewed in the United States on January 25, 2013
4.0 out of 5 stars
Classic Brit Sci-Fi
Verified purchase
Now, this isn't 21st century CG effects or sexy story lines but it is entertaining and worth a look-see to fans of the genre.
Much more akin to the early "Dr. Who" series as far as story and effects are concerned.
If you're a fan of "Village of the Damned," "Quatermass and the Pit", "X-the Unknown" or "The Day the Earth Caught Fire" among other British Sci-Fi of the 1960s then this charming ( and admittedly somewhat naive) film fits the bill.
2 people found this helpful

Leslie Karen RigsbeyReviewed in the United States on January 10, 2014
2.0 out of 5 stars
Not essential films...
Verified purchase
I love B-movies (it wasn't "Gone with the Wind" that got me into cinema, but rather titles such as these) but these two titles are really regrettable. "Chosen Survivors" is a potentially good story premise but it is spoiled by a really bad script, ham acting, and too many lulls. I was actually upset that this one didn't go anywhere. "Earth Dies Screaming" is not as unpleasant as it sounds, but I found it too empty to be really enjoyable--and brevity is not always a good quality; I felt a bit cheated.
The DVD picture and sound are okay, but the packages offer only a couple of trailers, no extras or commentaries of any merit; "Chosen Survivors" isn't the deepest film, but I can imagine what a social context/historical POV audio commentary would have added to the quality of this offering on DVD.
Again I don't like to badmouth the 'B''s, but it's really unfortunate that these two films didn't offer more in the way of quality. Not essential in any way for a collection of more unusual sf/horror titles.
One person found this helpful

TimeLord1Reviewed in the United States on October 26, 2013
4.0 out of 5 stars
Love those English Sci Fi movies of that time period
Verified purchase
I enjoyed The Earth Dies Screaming. I found it compelling and we'll acted. The movie is thought provoking. Keep in mind that there is very little Sci-Fi action. The movie's attraction for me comes from the dialogue and the underling tension. This could happen.

Chosen Survivors has it's moments and surprises. People isolated, facing survival---you get the picture. I believe it was a "made for TV movie".
One person found this helpful
See all reviews
Back to top
Get to Know Us
Make Money with Us
Amazon Payment Products
Let Us Help You
EnglishChoose a language for shopping. United StatesChoose a country/region for shopping.
© 1996-2022, Amazon.com, Inc. or its affiliates