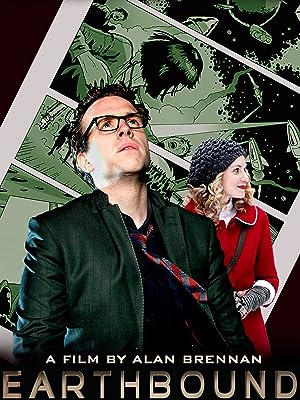 (510)
5.71 h 38 min201313+
Joe Norman just wants the ordinary things in life: a job he doesn't hate, a place to call home and nice girl to settle down with. He's just like the rest of us. But this is also the story of a young man who was told by his father, on his death bed, that he is an alien and must continue his dying species.

By_Rant_Or_Ruin - truth.Reviewed in the United States on September 6, 2015
4.0 out of 5 stars
I can confidently recommend this film. For crumb sake - watch it for yourself, make up your own mind.
Verified purchase
This movie used a tried and true movie formula and so it is an enjoyable movie. I don't actually have a reason not to like it other than the sound being so absolutely terrible without using some kind of filter on it. After fixing the audio manually using Dolby surround functions and messing with my EQ, I restarted the movie and began to thoroughly enjoy myself. This film did not come off as budget at all. It was filmed in a very gear nerd way, The acting was great and the movie was fun but predictable. I have a difficult time watching truly budget films - this is not one of those. If your in the mood for a tried and true formulaic film. If you are in the mood for developing love and quirky bits of humor, watch this movie. If you suffer a touch of Sci-Fi love, watch this movie. I was not in the mood for it, but I hit play anyway and the mood was inspired. I can confidently recommend this film. I must ask; since what Era have we stopped taking chances on watching pictures? For the love of crumb cake why would anyone make such a personal decision based on other peoples opinions without watching it first. Go ahead and hate it - AFTER it is watched. I tell the reader this, watch it - you will not regret the time spent.
3 people found this helpful

Priscilla BallouReviewed in the United States on January 19, 2018
4.0 out of 5 stars
Sweet little SF romantic comedy that grows on you
Verified purchase
I was surprised by how much I liked this movie. It's a small film that takes your sense of what is real back and forth across the boundaries of reality. Just when you think you have your feet under you, it pulls out the rug again. A lot of fun with a terribly sweet set of lovers in the center of a small but excellent cast. I especially liked Maria's quirky best friend. Not enough to get five stars, but plenty to earn an enthusiastic four stars. If I could give four and a half, I would. Watch it and enjoy it.
4 people found this helpful

Abigail StoneReviewed in the United States on April 30, 2015
4.0 out of 5 stars
Adorable sci fi/rocom
Verified purchase
adorable. I don't know, it was just very very cute. the cute young guy who believes he is an alien. the very very pretty girl who likes him. the jokey presentation of it, without being stupid, just an all around winner in my opinion. And sails along without any pat/reundant scenarios. The precept is refreshingly new (can't explain without giving it away!). It falls short of 5 stars simply because the ending is too abrupt. It should have gone on another few minutes to clarify and to let it sink in.... definitely worth watching if you like well written sci fi humor/romance.
10 people found this helpful

Boyd MartinReviewed in the United States on July 14, 2015
4.0 out of 5 stars
Man Who Fell to Earth with a twist
Verified purchase
Another take on the Man Who Fell To Earth story, with a paranoid bent. After having a lifelong relationship with a holographic computer in the image of his father a la Superman and Jor-El, our main character starts to lose faith that he really is who he thinks he is thanks to a new skeptical girlfriend and deep government agent who efficiently and brilliantly mind bends him. My overall feeling after the movie was that the script was rough, not really explaining enough soon enough, although the ending is satisfying. Acting is good, and the movie keeps a good pace. It's a little too dark cinematically for my tastes, which adds nothing to creating a sinister mood for some reason. There's a poignant love story going within the greater plot that pulls at the heartstrings, so you really are rooting for our starman to wake up and figure out what the hell is going on. I'd watch this one with Starman and K-Pax for a triple feature.
One person found this helpful

Is it a legendary series in the making like Star Wars? No, this is what I'd call a Hallmark version of sci fi - good for a free watch at home with the family and friends or by yourself. It is well written, unique, and has some surprisingly well done moments. It is well acted for the most part, and goes by pretty quickly covering a lot of ground in the story in less than 90 minutes. I do recommend it for a light sci fi night in.

Jonathon SandersReviewed in the United States on June 2, 2015
4.0 out of 5 stars
Solid Performance - Worth the Good Reviews
Verified purchase
Interesting concepts, strong acting and pleasant characters make this a good movie. I would recommend a viewing if you like Sci-Fi and don't mind something a bit lighter with some twists. By lighter I am not referring to comedy though it does have its relief moments. Instead I am referring to the fact that many sci-fi writers try to make every story deep and interwoven. This one was more straightforward even with the twists. If you watch it again it won't be to catch things you missed it will be because you genuinely love it.

Ed EReviewed in the United States on June 23, 2016
4.0 out of 5 stars
Campy sci-fi sitcom.
Verified purchase
I was quite pleasantly surprised by the quality of this movie, as I've come to expect cheaply done, poorly-acted movies as the norm for this type of indie film. I won't say this was the best acting in the world of film-dom, but then it wasn't the worst, either. The story line is a mash up of the familiar Superman theme with a touch of Flash Gordon mixed in. The only real fault I find with this movie is the sound editing. Oftentimes the dialogue was too soft to hear, even at levels where the music would blast you out. I should have given this 3 stars, but I felt generous in light of the overall experience.
One person found this helpful

Ronald ManigliaReviewed in the United States on August 1, 2017
4.0 out of 5 stars
Enjoyable quirky SciFi
Verified purchase
Quirky SciFi lightly comedic love story suitable for all audiences. Complaints by previous reviewers about sound levels are only a minor issue during the first several minutes of the movie. The acting is generally believable and well-grounded in "reality" without giving away the ending of this enjoyable movie.
One person found this helpful
See all reviews
Back to top
Get to Know Us
Make Money with Us
Amazon Payment Products
Let Us Help You
EnglishChoose a language for shopping. United StatesChoose a country/region for shopping.
© 1996-2021, Amazon.com, Inc. or its affiliates