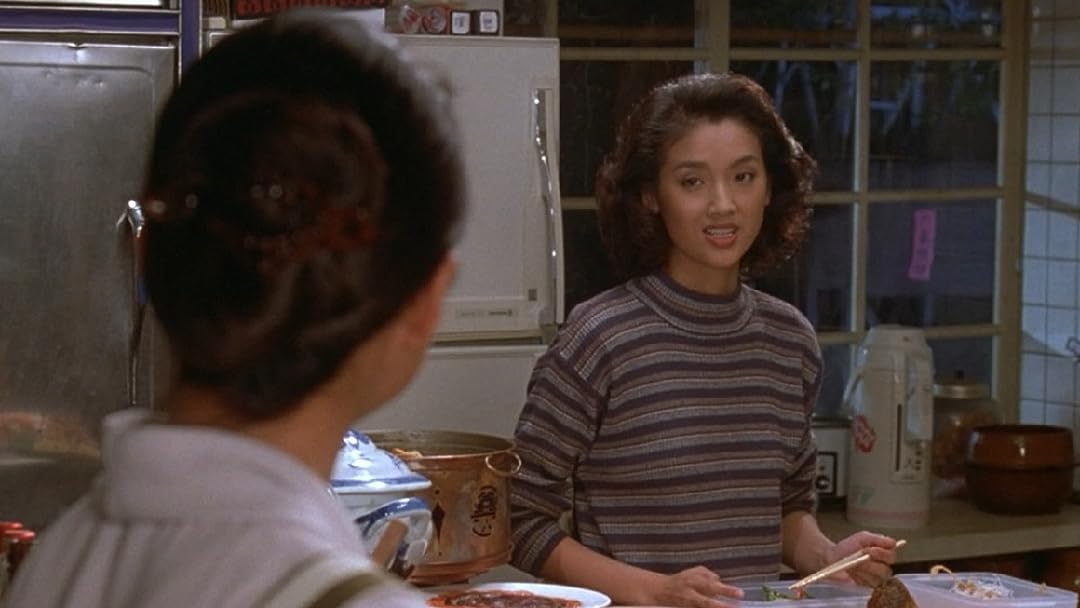 (554)
7.82 h 4 min1994X-Ray13+
The love lives and secret ambitions of three unmarried sisters play out during the weekly ritual of a family dinner hosted by their widowed Master Chef father.

Matt JarvisReviewed in the United States on October 25, 2017
5.0 out of 5 stars
This is one delicious meal, uhh movie
Verified purchase
Only Ang Lee could create such a dish as this one. Lee is a master at stories that show characters growing and changing while one is always the same and yet surprisingly the only one who didn't need to change but has the largest change in his life. Lee is a great chef introducing what is the main entree into the meal and enticing you with appetizers and drinks, taking you through the early courses and then giving you the delicate surprise that makes it all worthwhile and finishing with a delicious dessert.
The acting in the movie was spot on. Some will say that one character seemed too stereotypical and yet that character needed to be bold so that when seasoned and mellowed you could fully appreciate the work put into the dish.
13 people found this helpful

PHUONG ANH VOReviewed in the United States on May 15, 2020
5.0 out of 5 stars
A Family Classic
Verified purchase
I watched this movie around 4 am and finished at around 6.54 am. Learned from other reviewers, I prepped myself with some cold chocolate milk and cookies, added Lay's original chips in case I feel hungry while watching those delicious meals. Man, they were right. The dishes were as beautiful and homey as it could get.
For the first half of the movie, I thought it was a slow family affairs movie. I paid more attention to the second daughter's fashion. Simple, elegant, and tailored. So 1990s. No wonder people always cycle back to the 80s and the 90s. Timeless.
***Spoiler Alert***
Then, the sudden picked up of the younger daughter's pregnancy with a cute boy whom she kinda "stole" from her coworker (lesson learned: never introduce your hot boyfriend to other girlfriends or sisters) and the older sister marriage. I thought they were a traditional family....but the girls left like a sudden storm. Quite artistic yet funny at the same time. Laying in my bed, I was like, should I laugh? Can't figure it out...another crazy twist when the father announced his news...I was like, holy cow, damn grandpa, you really did it huh. Plus, having another kid at 70? Man, men are so lucky. Their sperms never get old. I witnessed in real life myself. My uncle, who married his second wife at 65 and had another boy (a total of 3 daughters and 1 boy) at 71. So he's gonna be 90 when his boy goes to college.

Anyhow, a great family movie. Every detail, (smell) were executed beautifully. A classic for many rewatches.

J. C. LiuReviewed in the United States on October 6, 2016
5.0 out of 5 stars
A culinary and family masterpiece, with a so-so Blu-ray edition.
Verified purchase
I've been a big Ang Lee fan since he first hit his stride with The Wedding Banquet. There's a trilogy of films -- Pushing Hands, Wedding Banquet, and Eat Drink Man Woman, which capture the Asian-American experience and the modern Asian growing up amidst tradition experience.

Of these three films, EDMW is the undisputed masterpiece. It's beautifully filmed -- the opening cooking sequence features five minutes of a master Taiwanese chef plying his art, and it's some of the best cooking video/food porn in the history of film. But most of the film is about family and the complicated, multilayered relationships between them. Lee drew extraordinary performances from his cast, many of whom recur in all three films (and proceeded to appear in Crouching Tiger and other subsequent Lee movies). And with his skillful capturing of Taiwanese emotional repression, awkward silences, and struggle to avoid embarrassment at all costs, it becomes clear why Emma Thompson saw this movie and decided he was the person to direct her adaptation of Jane Austen's Sense and Sensibility.

The Blu-ray issue itself is so-so. The film looks good, not great. Audio is fine. There isn't much in the way of extras on the disc. So, it's a three star issue of a five star movie.
8 people found this helpful

13-5Reviewed in the United States on November 23, 2018
5.0 out of 5 stars
A gem worthy of your movie collection!
Verified purchase
I first saw this movie at a local library and the cover art got my attention--there was nothing special to it, but the girls in the photo just KNOW how to stand out, so I checked it out. Long story short, I'm glad I went with that choice!

The story may be a simple idea of a man and his children--in this case, his three daughters--living their lives with their own personal problems, but its execution is well above par. Humor, drama, romance, and all those other emotions are here.

About the audio options, the back cover says, "Mandarin with English subtitles." If you try to enable the subtitles, the menu won't let you, but fear not: the subtitles automatically appear during the dialogue sequences; in other words, it's already set.

This is a movie that I can definitely recommend to any movie-lover, so check it out whenever you can!
6 people found this helpful

PenelopeReviewed in the United States on August 4, 2021
5.0 out of 5 stars
A gentle, tasty film. A good emotional palate-cleanser.
Verified purchase
I never write film reviews here but I had to for this. I saw this movie when I was a kid, and thought it was just ok. I crew up in a Chinese-American household watching my family cook big delicious meals, so I definitely liked all the cooking scenes as the sights and sounds were so familiar. Now that I'm around the age of the grown-up Chu daughters, I see this film in a whole new light and it makes me weep with nostalgia and homesickness for my family and our big Chinese family dinners. Now that my grandma (the best cook) is passed away and my parents are divorced, and I'm not very good at cooking Chinese food, I cry because we'll never have those dinners again. This film is almost like a time capsule of my own early memories.
It's set in Taiwan but everyone can relate to it - career/workplace drama, romantic struggles, children growing up and having their own lives, etc. Each and every character is well-developed and completely lovable and the viewer definitely identifies with each one. I consider it less of a family drama and more of a slice-of-life story. There's no huge painful blowup, and the ending is quiet but happy without being sappy. It's also a food movie who's food prep scenes are as delicious as Julie and Julia, Ratatouille, etc.

joel wingReviewed in the United States on March 24, 2021
4.0 out of 5 stars
1 of Ang Lee's best about family moving in different directions & food holding them together
Verified purchase
Eat Drink Man Woman by Ang Lee is about love, family and food. The opening alone with Sihung Lung as the father preparing a meal will make you hungry. Lung plays a chef who lives with his three daughters, Kuei Mei Yang, Chien Lien Wu, and Yu Wen Wang, who are going in different directions. The film is beautifully done and weaves together a number of relationships not just the ones between father and daughters. Lee knows just when to throw in a laugh or get sentimental. The scenes of Lung cooking are worth the price of admission. Ultimately it is food that brings the family together even as each daughter finds their path in life. It was only Lee’s third film but it stands as one of his best.
One person found this helpful

KGSReviewed in the United States on June 11, 2020
5.0 out of 5 stars
Excellent Movie
Verified purchase
This movie is all about characters, not silly special effects. It is a wonderful film of ordinary people in Taiwan. Having lived in Taiwan for 2 years, I really appreciated the scenery and characters. This Taiwan movie was made before Hollywood tried to copy it with other food movies (Ramen Girl, Tortilla Soup, etc).. The original is always the best.
One person found this helpful

NYC Gal OutReviewed in the United States on January 22, 2012
5.0 out of 5 stars
Makes me so HUNGRY!!!
Verified purchase
I love this movie. I first saw it on Netflix, it recommended this movie based on me giving The Joy Luck Club five stars (LOL), it was a completely different movie altogether though, but whatever, I am not going to give a comparison to the movies - it has nothing to do with this movie.

I loved the movie so much when I saw it on Netflix that I bought it on Amazon. Anyway, the movie is entirely in Mandarian Chinese, with English subtitles. It was filmed in Taiwan. Some ramblings of another reviewer kept going on and on about Tortilla Soup - to that, I want to say this, that mediocre film Tortilla Soup was a remake of THIS movie! Just because you saw that movie first doesn't mean it was made first; this movie was made in 1994 (hello! you do the math!) - I just had to get that off my chest because I mean, really, when they remade it, they didn't even bother changing the script! Talk about plagiarism!

Anyhoo, this is a great movie to show Chinese culture, for those of you who are curious - or who love movies (like me) of ethnic cultures (like Moonstruck, My Big Fat Greek Wedding, Fiddler on the Roof, etc.). I loved the movie so much I didn't even care that I had to read the subtitles, it didn't take away from the brilliance of the movie at all... I think it was the fact that my mouth was watering so much!

This is the BEST movie that shows Chinese culture via food - just so you know, the movie starts off with the father, a master chef in Taiwan, Mr. Chu, making the ritual Sunday family dinner. The five minute filming of the beginning of the film where it shows such a detailed cooking is so rich, and makes you sooo HUNGRY! I always get so hungry after this movie, and nothing ever satisfied my appetite unless I have authentic Chinese food (and I'm not talking about the take-out kind either).

Anyway, this movie is not a drama - it's a light, family comedy; but not those stupid slapstick comedies like Will Ferrell or Jim Carrey does; it's a realistic comedy (think of a cooking show on the Food Network with a plot line).
8 people found this helpful
See all reviews
Back to top
Get to Know Us
Make Money with Us
Amazon Payment Products
Let Us Help You
EnglishChoose a language for shopping. United StatesChoose a country/region for shopping.
© 1996-2021, Amazon.com, Inc. or its affiliates