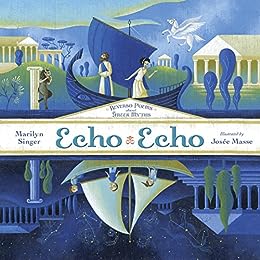 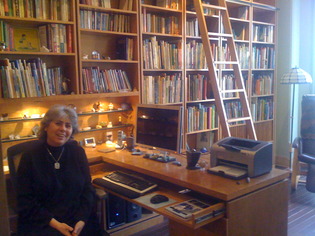 Gr 2–5—A brilliant practitioner of the eponymous poetic form conveys both the drama and pathos of myths that have entertained throughout the ages, while establishing that there are two sides to every story. Full-page artwork, bathed in dazzling blue and gold tones, sets the stage for these timeless tales of gods and mortals told with a poignant and commanding lyricism. --This text refers to the hardcover edition.

"A wonderful addition to poetry collections andaccompaniment for the myths."—  Booklist

"The perfect supplement or introduction to Pandora, King Midas, Icarus, and the rest of the bunch of fantastically flawed gods, monsters, and mortals…easy and rewarding to read." — The Boston Globe

"Mythology and Western civ curricula will grab greedily for this one." —BCCB --This text refers to the hardcover edition.

Marilyn Singer is an award-winning author of more than 90 children’s books in a wide variety of genres.

Josée Masse is a recognized artist in her native Canada, having illustrated numerous French and American picture books. --This text refers to the hardcover edition.
Read more

4.8 out of 5 stars
4.8 out of 5
48 global ratings
How are ratings calculated?
To calculate the overall star rating and percentage breakdown by star, we don’t use a simple average. Instead, our system considers things like how recent a review is and if the reviewer bought the item on Amazon. It also analyzes reviews to verify trustworthiness.

micdeebee
5.0 out of 5 stars Poetry to engage your mind and feed your imagination
Reviewed in the United States on June 1, 2016
Verified Purchase
Marilyn Singer is not one to shy away from a challenge. Apparently, coming up with compelling book concepts and formats keeps her from being bored! Case in point: her challenging "reverso" poetry form which first appeared in her fairy-tale themed collections MIRROR MIRROR (Dutton Books for Young Readers, 2010) and FOLLOW FOLLOW (Dial Books, 2013). For those new to this form, reversos are poems that can be read forwards or backwards to express two sides of one story.

The highly-acclaimed form is back for a third time in ECHO ECHO: Reverso Poems about Greek Myths (Dial Books, 2016). Granted, I've loved Greek mythology since I was a child, but to see these familiar stories being told in such a fresh new way is fantastic! But what if you're not a longtime Greek mythology buff like I am? That's okay! You don't need to be since there is a brief summary of each myth across the bottom of every spread.

Besides the excellent (starred) reviews ECHO ECHO received from Publishers Weekly and School Library Journal, The New York Times had this to say: "Marilyn Singer’s ingenious ‘reverso’ poems are child-friendly feats of verbal pyrotechnics." I mean, really, need I say more? Probably not... though I will anyway.

The Boston Globe described ECHO ECHO as "The perfect supplement or introduction to Pandora, King Midas, Icarus, and the rest of the bunch of fantastically flawed gods, monsters, and mortals…easy and rewarding to read."

The Wall Street Journal described the collection as "delightful...vivid, glowing." And speaking of delightful, vivid, and glowing, wait until you see the amazing illustrations by Josée Masse! Once again, just as she did with MIRROR MIRROR and FOLLOW FOLLOW, Josée Masse provides a feast for the eyes. With a palette of Mediterranean-inspired blues, golds, and greens, the stylized illustrations capture the dualistic nature of the reversos in gorgeous detail.

edward cattell
3.0 out of 5 stars Greek Myths
Reviewed in the United States on January 13, 2019
Verified Purchase
The poems were great and the pictures also. However, the little two line summary of the Greek Myth underlying the poems was way too little to explain the myth if you were not already familiar with the story. Although, perhaps the two line summary is enough: e.g. - Pandora was a goddess. She got a box she was not to open. She did anyway and released bad stuff. All that was left was hope. Is that enough?
Read more
Helpful
Report abuse

Robert Ramirez
5.0 out of 5 stars Gorgeous book--lots of fun
Reviewed in the United States on May 13, 2020
Verified Purchase
My kids so enjoyed reading this book during our Poetry Tea Time. My almost 7 year old was super into it! The pictures are gorgeous. And I love that a snippet of information is given about the myths with each poem. It goes great with our study of ancient history. Really a great buy!
Read more

5.0 out of 5 stars Gorgeous book--lots of fun
By Robert Ramirez on May 13, 2020
My kids so enjoyed reading this book during our Poetry Tea Time. My almost 7 year old was super into it! The pictures are gorgeous. And I love that a snippet of information is given about the myths with each poem. It goes great with our study of ancient history. Really a great buy!
Images in this review

Kindle Customer
4.0 out of 5 stars Okay read, beautiful book
Reviewed in the United States on October 29, 2016
Verified Purchase
I found the book is wonderfully worded. The pages are beautiful and are great for kids making inferences. I did find it a bit pricey for an Ebook.
Read more
Helpful
Report abuse

Claire Peterson
5.0 out of 5 stars Loved it!
Reviewed in the United States on June 23, 2017
Verified Purchase
Beautiful poems, lovely illustrations! Used it in my 6th grade ELA class and they loved it!
Read more
One person found this helpful
Helpful
Report abuse

megank
5.0 out of 5 stars Another winner
Reviewed in the United States on April 25, 2016
Verified Purchase
I love Marilyn Singer's Reverse poetry! Such a cool collection.
Read more
Helpful
Report abuse
See all reviews

Renee houle
5.0 out of 5 stars Beautiful book
Reviewed in Canada on August 16, 2017
Verified Purchase
Lovely book! Students loved it. We are studying poetry and greek mythology... and this is a beautiful tie in. Wonderfully written. Can't say enough.
Read more
Report abuse
See all reviews