You've subscribed to Jacky Leon! We will preorder your items within 24 hours of when they become available. When new books are released, we'll charge your default payment method for the lowest price available during the pre-order period.
Update your device or payment method, cancel individual pre-orders or your subscription at
Your Memberships & Subscriptions
There was an error. We were unable to process your subscription due to an error. Please refresh and try again. 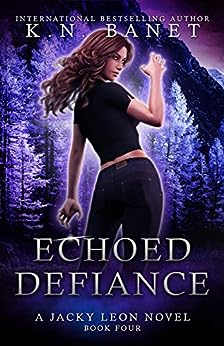 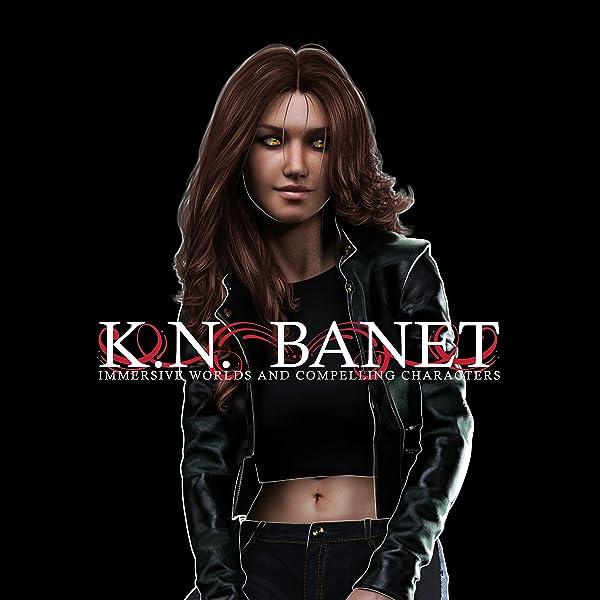 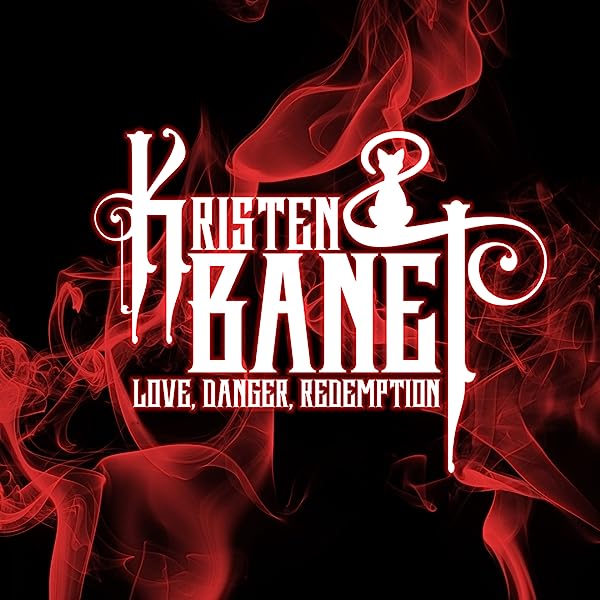 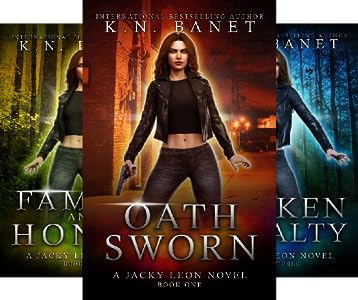 4.7 out of 5 stars
4.7 out of 5
804 global ratings
How are ratings calculated?
To calculate the overall star rating and percentage breakdown by star, we don’t use a simple average. Instead, our system considers things like how recent a review is and if the reviewer bought the item on Amazon. It also analyzes reviews to verify trustworthiness.
Top reviews

30 Book A Month Reader
4.0 out of 5 stars Issues
Reviewed in the United States on September 15, 2020
Verified Purchase
Book 4 in Jacky Leon, werecat, for the Tribunal World of KN Banet. Please make sure you read the previous books to know and love this series.

Jacky is the liaison in North America for the werecats. Because of this, Jacky receives a call that a doctor from the local supernatural hospital is on the run and is asking for Jackie. Not knowing what to expect, Jackie grabs Heath and off they go. Upon arrival they find out that the doctor is Jackie's human twin sister, Gwen. Gwen is on the run from a Russian pack of werewolves. There is much detail here on why she is running and I don't want to give too much of the story away by going into it. Once they figure out what is happening, Jacky, Heath and Gwen end up in Russia with Hiseo and Mischa - Jacky's werecat siblings.

I enjoyed the book, but literally despised the character of Gwen. I thought she was a major PITA, and her motivations and actions were correct, but also very self-serving. Gwen struck me as a crusader, but one who also wanted to be admired for her selfless actions. In any event, Gwen was way in over her head. It wasn't until the end of the book that I decided Gwen was going to fit into Jacky's world, and I started to develop an appreciation for her.

Over and over again Jacky's siblings have berated her, downgraded her, ignored her and challenged her. It's about time it stopped. I understand that she is the youngest sibling, and they are centuries older, but you don't continuously sneer and downgrade someone, and at the same time tell them you love them. It's time they accepted Jacky and showed her some respect. There was several times during the book I wanted to slap Jacky for putting up with the garbage they were dishing out, and it has been going on for 4 books now.

Lastly, call me pragmatic more than romantic, but if I was in love with a guy - and I KNEW that once it was found out we were together we would both literally die - I'd be giving him a hard pass. Right now, they both strike me as stupid AF. It will be interesting to see how Jacky and Heath finally get the Tribunal to accept them as a couple. I suspect that Heath having grown so powerful will have quite a lot to do with it.

So, while I did enjoy the book - especially the action at the Russian camp - I had some issues with the personalities in the book, and hope the next one can iron some of them out. I struggled on giving this book 3 or 4 stars, but eventually decided the excellent writing and deep plot deserved a 4.
Read more
10 people found this helpful
Helpful
Report abuse

Lyly
5.0 out of 5 stars Another AMAZING book in this series.
Reviewed in the United States on September 18, 2020
Verified Purchase
Every single book in this series is a banger. It’s like the Twilight Saga (and i don’t compare just any series to Twilight). This whole series could get made into a movie and sell out theaters. It’s just that good.

In this book, Jacky once again faces danger but this time the threat comes from her sister, Gwen. Gwen has been working in the hospital for supernaturals (forgot the name lol) and has found out about Jacky. And when Gwen finds herself in a sticky situation she finds Jacky to help her. And of course...Gwen is in the type of trouble Jacky could start a war over, for getting involved. But fearless, loyal, caring, and just Jacky can’t turn her back on Gwen or on the trouble she is facing.

What was nice about this book, is that we really see Jacky start to really embrace who she is as a werecat. Specifically referring to her family. It’s clear that she loves her werecat family but she’s still torn about her human life, and this book we see Jacky let go of parts of her human life and really start to open up to her family. My only criticism of this book is that Jacky doesn’t thank her siblings or family for helping her. Making her seem ungrateful which I don’t think she is as a character. And I know thank you is sometimes meaningless in the grand scheme of things in this book, but I’d like to see her open up more to her werecat family and tell them how she feels about them.

I hope in the next book, the biggest issue that occurs is that Heath and Jacky’s relationship gets found out and we see them both navigate the supernatural world together. I want to see more of Jacky and her siblings and Hassan. I want to see Jacky have to tell Gwen about her relationship. And although I know that doesn’t make for the most exciting book, I just feel like it needs to happen and to happen in depth. Like how in the Twilight Saga, the last book was really two books, and Breaking Dawn part 1 was not exciting and action packed but flushed out the characters more. I feel like this series could benefit from a book like that.
Read more
3 people found this helpful
Helpful
Report abuse

JA
5.0 out of 5 stars Not disappointed at all
Reviewed in the United States on September 18, 2020
Verified Purchase
It is going to pain me to wait till next year for the next book in the series. I adore this series! Its one of the few where I actually like the female lead and don't feel like shaking the hell out of her throughout the book. We are on our way to book 5 and I am just as excited abt this series as I was when I gobbled the first book. Its rare to still have a series that doesn't drastically change the essence of the main character or storyline in some way at this point.

Jacky is coming into her own little by little. In this book, the hint from the ending of book 3 comes to fruition. We learn abt Jacky's twin and the family she left behind. This didn't play out quite how I expected it when I read book 3. But there is a balanced amount of action, family bonding and romance. We get to see more abt Jacky's werecat and human families. Some not are not exactly what you expect. Hisao is an interesting dude. I would like to see them interact more.

While I hate that the family is still on the Jacky is the baby nonsense, you can see that steps are taken to rectify that. A lot of her relationships here change for the better. I'm really upset I finished the book now.

It was a great read from beginning to end. It wasn't one of those that had to build up. Story had a good flow. Although I must say I do wonder what's happening w Heath and if that will ever be addressed.
Read more
3 people found this helpful
Helpful
Report abuse
See all reviews

Kindle Customer
5.0 out of 5 stars Finally!
Reviewed in the United Kingdom on September 16, 2020
Verified Purchase
Yet again another amazing book from this series. (Possible spoilers ahead so be warned!) This may be my favourite book yet in this series as we so much growth and character development from Jacky. She finally gets some closure on her human family, develops stronger {and adorable} relationships with her werecat siblings and FINALLY she makes a decision on Heath. Can't wait to see how everything evolves further in the next book.
Read more
One person found this helpful
Report abuse

HWilks
5.0 out of 5 stars Loved it
Reviewed in the United Kingdom on September 16, 2020
Verified Purchase
Read in one sitting, reading through the night, I just couldn't put it down. Ultimately, it's about family and what you are prepared to do for family. There is some movement on Jacky's relationship with both her families and with the delectable Heath. Its a winner for me. Great characters, writing and plot. You do really need to have read the previous books but as they are great, that shouldn't be a problem.
Read more
Report abuse

Dizzy.
5.0 out of 5 stars Echoed Defiance..studies family life accurately.
Reviewed in the United Kingdom on September 18, 2020
Verified Purchase
This Jacky Leon Book 4...Once again a great
read with the personalities we all love getting to know better. Thank goodness Heath and Jacky finally admitted their feelings( hope this doesn't spoil the book for others) and yes sex which was beautifully written. Can't wait until February 2021!
Read more
Report abuse

SarzWix
5.0 out of 5 stars Top. Class.
Reviewed in the United Kingdom on September 18, 2020
Verified Purchase
I don't hand out five star ratings willy nilly, but this book deserves it. The plot, the tension, the character progression, the fights, and the satisfying ending all work together to make a great book that I'll definitely be happy to reread.
Read more
Report abuse

MeMo
5.0 out of 5 stars Great Story
Reviewed in the United Kingdom on September 17, 2020
Verified Purchase
Love these characters and can’t wait for the next book. Like the fact that story is packed full without having to resort to chapter after chapter of the same old sex scenes. Well done.
Read more
Report abuse
See all reviews