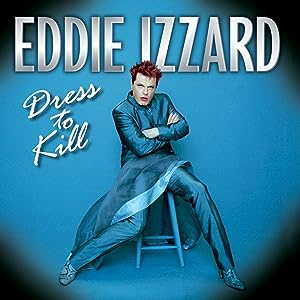 (1,225)
8.71 h 54 min13+
Funnier and smarter than stand-up has any right to be--Entertainment Weekly. "A human search engine...The funniest boy on the block...a ticklingly entertaining comic with an actor's sense of word and movement, adept at creating little worlds in instant one-man plays"--The NY Times.

Pop BopReviewed in the United States on June 16, 2018
5.0 out of 5 stars
An Essential Introduction to Eddie
Verified purchase
This is easily and hands down the single best live comedy concert performance ever.
20 people found this helpful

Christine SmithReviewed in the United States on August 19, 2016
5.0 out of 5 stars
Still Funny After All These Years
Verified purchase
It had been several years since we sat down to watch Eddie do his thing in Dress to Kill. We were a bit surprised to learn that at the time, Britain was thinking about joining the EU and now have voted to Brexit. We had problems with terrorism, but not to the point it is at this time. It might have been a little dated in places, but for the most part, he was still on the mark with politics, history, his hilarious geography, being a transvestite, hiding his makeup in a squirrel hole, "cake or death?", do you have a flag? and all the wonderful and hilarious things he has to say. We had a blast reliving the dvd and I will have it with me to visit the rest of my family so they can enjoy it again. Thanks Eddie!
13 people found this helpful

A. TamayoReviewed in the United States on May 19, 2017
5.0 out of 5 stars
Hilarious, witty, informative
Verified purchase
This is the version that was available on the DVD, and is the version I love to death and can quote right along with him [to my friends' dismay]. I don't know what happened with the CD/mp3 version but that one was definitely not this performance.
I can't say enough good things about this, so I'll keep it simple: it's funny, I learned some things from it, and his delivery in this video is hysterical. I love this to death and have subje---er...shared this with many friends.
6 people found this helpful

Joan FletcherReviewed in the United States on June 22, 2021
5.0 out of 5 stars
Not the HBO show I was expecting
Verified purchase
I love Eddie Izzard and used to have a VHS tape of this show. The DVD is longer and some of it isn't as edited as it was on my VHS cassette, but Eddie is hysterical. I love him and this is probably his best work. I especially like the last 15 minutes or so which are in French! Even though I don't speak French, I understood every word and thought it was hysterical! Love you Eddie!
One person found this helpful

VibrationalWorldReviewed in the United States on September 10, 2021
1.0 out of 5 stars
Wow, I use to like this guy.
Verified purchase
But, after watching his routine and if what he says he actually believes, I don't care to watch him anymore. I did not find anything in this skit to be funny. It looks like he is desperately trying to be funny by saying things that may be perceived as spontaneous, when in fact they are not. In addition, his nonchalant persona is excruciatingly drab.

Carol PReviewed in the United States on May 29, 2017
5.0 out of 5 stars
Love it
Verified purchase
I have ordered this so many times & have loaned it to friends & never once gotten one back. Not quite sure about the opening cable car scene, but I love his wit & intelligence. I highly recommend. Ciao.
4 people found this helpful

MariniteReviewed in the United States on October 4, 2013
5.0 out of 5 stars
Still amusing after all these years...
Verified purchase
I'm sadly convinced that as we get older, something dampens our ability to find things as knicker-wettingly funny as we might have done when younger. And it seems we're less likely to be quite so intentionally funny ourselves (witness the many comedians who in their later years replaced their original good-humored hilarity with cranky, vile and vituperative acts). But Eddie Izzard's "Dress to Kill" seems timeless -- a light-hearted, innocent delight. True, I didn't find myself laughing out loud as much as I did at the first couple of viewings when it was originally televised, but except for a few pokes at history's well-acknowledged evil-doers, this is the kind of victim-less comedy that stands the test of time. And except for a liberal peppering of f-bombs, I think its content is otherwise acceptable viewing for teens, who might even learn a bit of history along with enjoying some laughs courtesy of a truly engaging comic.
6 people found this helpful

A. McleodReviewed in the United States on January 17, 2022
5.0 out of 5 stars
His best performance ever
Verified purchase
Eddie is so intelligent and funny. I love all of his/her work but this by far is my favorite. I have watched it over and over again and still laugh so hard. The message is relevant to current culture even though it's from 1999- probably even more so now.
See all reviews
Back to top
Get to Know Us
Make Money with Us
Amazon Payment Products
Let Us Help You
EnglishChoose a language for shopping. United StatesChoose a country/region for shopping.
© 1996-2022, Amazon.com, Inc. or its affiliates