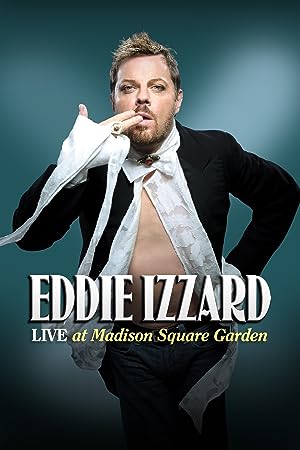 (63)
7.61 h 31 min201213+
"Life, the universe, and...everything. Here's what the critics are saying about Eddie's tour: Eddie makes us believe we can surf World 2.0 instead of just being swallowed up by it. As search engines go, he makes us feel lucky. - Los Angeles Times Izzard is a force with which to be reckoned. His rise is fundamentally cheering, not least because his material is rich, savvy and, at its best, ...

Eliza GReviewed in the United States on June 9, 2014
4.0 out of 5 stars
Some very funny new material among some old material
Verified purchase
Izzard is one of my all-time favorite comedians. I can count on laughing out loud many times at any show I watch. Madison Square Garden is no different. With no distractions--the stage is simple and there's no flamboyant dressing or heavy makeup--this is Eddie Izzard straight up.

If you're not familiar with his comedy, it's free of racial profiling, angry rants, and teenage boy humor, and is (with the exception of a liberal sprinkling of the f word) pretty much G-rated. He riffs on a lot of historical information that he gleans "from Wikipedia." And he's added a few more religious/scientific pieces that debunk a few bible stories. His humor is witty, ironic, insightful, and, well, often just brilliant.

If you are familiar with his comedy (I've seen every show) you'll be familiar with several bits that have been retooled, including Noah and the Ark, and silent giraffes, but there's plenty of new material to keep you surprised and laughing.

And when you're done with Madison Square Garden, make sure to move on to "Glorious," "The Definite Article," or "Dress to Kill" if you haven't already seen them. You'll feel happy, uplifted, and tired out from laughing so hard!

I haven't enjoyed a comedian's brain this much since Robin Williams! Looking forward to his next show, whenever that may be.

susan clare knightReviewed in the United States on October 12, 2014
5.0 out of 5 stars
Eddie is the thinking person's comic. Funniest man in the world!
Verified purchase
Eddie Izzard is the world's funniest stand-up comic because he's super intelligent and just a naturally funny man. He has that Brit wit, always. It's who he is. It's a way of seeing the world that you either have or you don't have. it can't be acquired. He's the thinking person's comic. I always laugh from beginning to end and that's rare with other comics. I think most American humor is satire not comedy, and when I'm watching I think "oh yes that's funny" but it doesn't make me laugh.
5 people found this helpful

S. PerryReviewed in the United States on May 26, 2016
5.0 out of 5 stars
&lt;3 Eddie Izzard!
Verified purchase
I saw this tour live, and I wasn't disappointed with the Madison Square Garden recording of it. It's not quite as laugh-out-loud funny as some of his older, sillier routines, but it gets funnier with every watching.

The subtitles on this are very well done, which is important for someone who's hearing impaired. I sometimes miss parts of his jokes as he does mumble, and so well-done subtitles are important.
One person found this helpful

Elaine OtsukaReviewed in the United States on June 22, 2014
5.0 out of 5 stars
Hilarious
Verified purchase
If you are a fan of Eddie Izzard, you need to add this one to your collection. He is so funny and smart - very witty. All of his shows are very good and they keep getting better and better as the years go by. This show is entertaining.
2 people found this helpful

Walter GayReviewed in the United States on September 14, 2017
1.0 out of 5 stars
Eddie...(sigh...)
Verified purchase
Politics and spirituality? Eddie, did you hit your head? Lose ability to write Superior Comedy? Jumping on the popular bandwagons...tsk tsk.
One person found this helpful
See all reviews
Back to top
Get to Know Us
Make Money with Us
Amazon Payment Products
Let Us Help You
EnglishChoose a language for shopping. United StatesChoose a country/region for shopping.
© 1996-2021, Amazon.com, Inc. or its affiliates