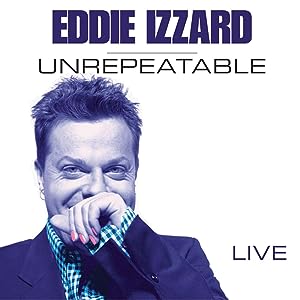 (127)
8.01 h 15 min13+
Recorded at the Albery Theatre in March of 1994 for a limited sold-out engagement of seven weeks. "...When he pulls up in mid-flow there is the same sense you get with Robin Williams sometimes, of the audience racing to catch up with a mind that moves too quickly for them"--The Independent, UK.

@laudpattyReviewed in the United States on October 19, 2021
5.0 out of 5 stars
Wonderful early Eddie Izzard stand-up - a great intro to his comedy work!
Verified purchase
It's likely that Eddie Izzard is such a good actor due in large part to his gifted ability to tell stories, which is deftly demonstrated in this special - to my knowledge, his first broadcast solo show. I have been following his stand-up career for about a decade now, ever since his Dressed to Kill special first aired on HBO. I had to buy whatever was for sale in America right away, which at first were only audio albums of his specials on iTunes. I was delighted when I found the videos were for sale here on Amazon shortly thereafter, but only was able to purchase a few of them (this one not included) before they became unavailable for sale on the US site. The remaining videos to round up my collection have literally been on my Amazon watchlist for the last 10 years. I can't begin to say how I happy I was to learn that all have become available to stream and purchase again!
Izzard's witty, observational comedy style is as hilarious as it is thought-provoking. And you don't have to be British to follow what's going on. At present, his entire stand-up collection is available here on Amazon. If you like what you hear in this special, be sure to check out the rest while they are still around!

This am usReviewed in the United States on December 20, 2012
5.0 out of 5 stars
Old Material Knocked Me Silly
Verified purchase
Maybe Eddie Izzard is an acquired taste. Slo what if he's wearing mascara, lipstick and nail polish? Unless he's *talking about his wearing those, and maybe even a dress and all the "fixin's" that go with it, if you close your eyes, he's just a hilarious British comedian whose warped way of looking at the world -- which is often the world around *you as well, even if you're **not** British -- is just plain wacko funny.

This was recorded at the Albery, a high, high theater with pretty good acoustics it seems, in 1994, which was a year or so before someone exposed me to him. It's dadgummed near as fresh today, in 2012 (almost 2013) as it was then. He's got a goofy let's "make up history as it *should have been" way of looking that things that will make you feel like someone nearby must have smoked something funny and you have a contact high. His goony view will leave you staggering.

It's nice to stumble from silly for a change instead of daily horror. I'm glad Eddie Izzard is around, and I wouldn't mind having him for a neighbor. This is a good introduction.Watch Unrepeatable and see mu next door neighbor. I think he's really a cat. ::snickersnort::

Hannah Reviewed in the United States on November 10, 2019
3.0 out of 5 stars
Must buy
Verified purchase
I've been looking to find one of his shows that was more brilliant than dressed to kill. This is almost as good for me! So hilarious and quick witted. The disc its self was horrendously filthy with fingerprints and what looked like snot. BUT after some tlc it came out clean and plays well.

Woody WoodyardReviewed in the United States on December 29, 2012
2.0 out of 5 stars
Only fair E. IZZARD
Verified purchase
This DVD is of a very early Eddie Izzard show done in Great Britain. If you're a huge fan of Izzard it's worth seeing once, just to see the roots of all his best stuff. I mean, this show has to be at the beginning of his career. All the elements are there, including the basic rough threads of what will become polished, roll in the aisle skits and routines. Wearing a big suit jacket over a slightly plump "baby Eddie", he barely hints at his later transvestite persona with some skinny black slacks. His timing is a bit off and his great ability to pause, go into "Stream of Consciousness" mode, then come roaring back isn't yet full on.
It is worth seeing once if you go back to the classic albums about once a year or more, as I do. I bought this DVD because it has a much later picture of Eddie on the cover. If I had known it was of this early, EARLY show, I wouldn't have bothered. Putting a picture of a much more mature Eddie Izzard on the cover of this show is nothing less than "A Bait And Switch" hustle. If you're nuts about Izzard, RENT IT, by all means. If you haven't savored the classics such as: GLORIOUS, DRESSED TO KILL, or DEFINITE ARTICLE, PLEASE don't let this be your first exposure. Any of these should leave you guffawing with a sore belly. Enjoy.
12/30/12 Addendum: Alright, alright! I too, am a huge fan. I'll bump my review to 3 stars. I just really got sore with the much more mature picture of Eddie on the cover. I still think it's a hustle. I just want the newbies to get solidly hooked, so they can view this show with an affectionate eye.

H. KayReviewed in the United States on November 1, 2021
5.0 out of 5 stars
Love Him
Verified purchase
No matter what he says or does, he is hilarious!

Joshua MarvinReviewed in the United States on November 7, 2006
5.0 out of 5 stars
The best Izzard out there
Verified purchase
I admit, the audio on this DvD is of low quality, but if all you are doing is watching it there shoulden't be a problem hearing what Izzard is saying. Before I saw this I would have said that Dressed to Kill or Glorious was the mans best show but this one takes that cake. The dog fetching the stick part had me laughing so hard my step-father came in my room to ask if I was ok, and I have never had him do that before over anything. If possible I would have given this a 10/5!
7 people found this helpful

Charles Maddox Jr.Reviewed in the United States on January 7, 2019
5.0 out of 5 stars
Best stand-up ever
Verified purchase
If you are a fan of Eddie Izzard, you don't need me to say anything. This is by far one of the best performances he has ever put out. If you have never heard his stand-up, this is one to start you off right.
See all reviews
Back to top
Get to Know Us
Make Money with Us
Amazon Payment Products
Let Us Help You
EnglishChoose a language for shopping. United StatesChoose a country/region for shopping.
© 1996-2022, Amazon.com, Inc. or its affiliates