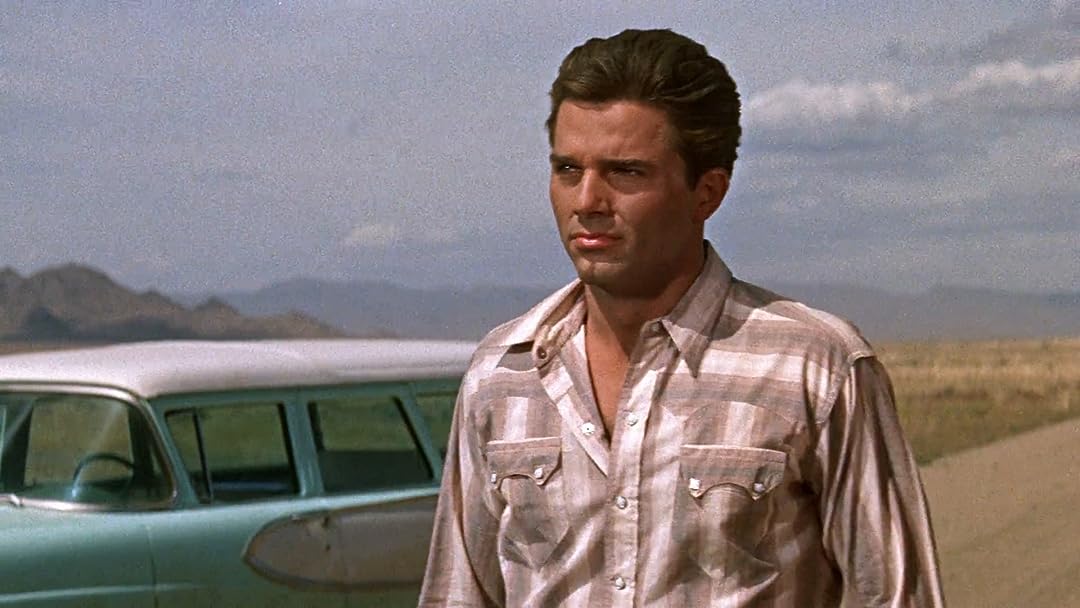 Hugh OliverReviewed in the United States on October 22, 2011
5.0 out of 5 stars
Environment, Cast, Director all make this an unforgettable experience
Verified purchase
The star attraction of Edge of Eternity is the Grand Canyon, not just by its beauty, but also by its vastness and inherent dangers. The film's high desert settings, with locations in and around Kingman, Arizona, also contribute very effectively to this crime thriller of the late 1950s West. Less than fifteen minutes into the story, Cornel Wilde's deputy sheriff stops at a gas station on the outskirts of Kingman. It is dawn in the desert and the weather is noticeably windy and chilly. In the next scene, the sun is out, and a motel proprietor cheerfully allows that it "looks like it's going to be another scorcher today!" While these small details may seem insignificant by themselves, they add flavor and a real sense of locale.
Cornel Wilde is great as Deputy Les Martin, a man who has made mistakes in his job but has been given a second chance. As interpreted by Wilde and scriptwriters, his character is friendly, relaxed, and modest. Chemistry between Wilde and leading lady Victoria Shaw is excellent, and the film has a supporting cast of pros in Edgar Buchanan, Jack Elam, Tom Fadden, and Mickey Shaughnessy.
Edge of Eternity is not considered a major work in director Don Siegel's credits, possibly because the story and length (80 minutes) are not epic in scale, but the leanness throughout and toughness of certain scenes represent Siegel at his best.
Daniele Amfitheatrof's score offers majestic canyon music and a love theme which is rendered first in a breezy, orchestral pop arrangement with pizzicato strings, then later in subdued woodwind pastels.
Because this issue is part of Sony's DVD on-demand series, there are no extras. It is great, however, to see Edge of Eternity again in widescreen, preserving the original cinemascope ratio, and in a first-rate transfer with vivid Eastman Color.
Highly recommended, and especially so for anyone who saw the movie when it was first released in 1959.

12-31-19 Addition: Edge of Eternity has been available on Blu-Ray for
some time on the Twilight Time label. As good as the DVD is, the Blu-Ray
is even better.

Celia TrimboliReviewed in the United States on February 22, 2015
5.0 out of 5 stars
Edge of Eternity
Verified purchase
I always liked this little crime mystery film. A modern-day lawman has to solve some killings around an abandoned gold mine. The characters are, for the most part, likeable. Not the DA though; he is clearly a politician who wants his cronies in office and is making things hard for the cops in charge of the case. The best part of this film is the locale. Filmed around the Grand Canyon and Kingman, Arizona and the scenery is gorgeous. Always made me want to visit the area. One thing though; I would not like to ride one of those cable car buckets. Not much between you and eternity. The picture and quality is sharp, clear and vividly beautiful. The DVD-R, though having no extras, is excellent quality and highly recommended.
One person found this helpful

Dr. Neal H. SeymourReviewed in the United States on July 4, 2016
5.0 out of 5 stars
Surprisingly rare cinema gem - mystery, CinemaScope and the Grand Canyon
Verified purchase
A rare gem in magnificent CinemaScope with the Grand Canyon as one of the stars. A great look back at everything 1950's from small motels to convertible sports cars to clothing styles. A surprisingly taught suspense mystery unfolds with a deadpan Cornel Wilde working hard to solve the mystery with many twists and turns. He does not do a typical "star" thing -- he makes the film come alive. The supporting cast is wonderful and the rarity of the whole thing being photographed on location makes it all the better. Again -- a real sleeper which really needs to be seen. The transfer si fantastic. Sit back and enjoy the Grand Canyon and a great story.
4 people found this helpful

GLReviewed in the United States on November 12, 2011
4.0 out of 5 stars
Don Siegel's warm up for "Dirty Harry"
Verified purchase
The "Edge of Eternity" is a little "B" movie that offers a glimpse of what will become the classic Don Siegel film "Dirty Harry". The Grand Canyon stands in for "Harry's" San Francisco. Director Siegel uses one of the great natural wonders of the world just as he used the "Ciy By The Bay". The "where" becomes a character in this drama that gives you a uneasing feeling about the environment. Cornel Wilde is a little more amiable than Clint Eastwood but he is still,like Eastwood, a flawed lawman who is also at odds with the local District Attorney. Victoria Shaw is the "lady in distress" who is kidnapped (kids in the bus replace her in "Dirty Harry"). The climatic fight takes place in an unusual industrial setting (just like "Harry"). Finally, there is an "off his rocker", very quirky bad guy. In "Eternity", villian Mickey Shaughnessy laughs as he discusses his previous murders to his next victim. He also seems to be having a really fun day as he snaps his fingers along to the music on the car radio as he tries to escape Wilde. Shaughnessy is no Andrew Robinson but this was the 50's and you could only take "quirky" so far. "The Edge of Eternity" is no "Dirty Harry" but it is an off center little B movie with a great location as a backdrop.

My primary endorsement would be the Columbia Classic's Movies on Demand DVD-R from Sony of this film. I have found all the DVD-Rs from Columbia Classics to be really top quality. The print used to produce the DVD-R of "The Edge of Eternity" gives the disc beautiful images AND beautiful sound. In fact, I am more impressed with the clear, clean audio of this 50's film then the breathtaking images. "The Edge of Eternity" is not great, but the quality of the disc make it a really enjoyable experience to watch.
13 people found this helpful

Bronson McQueenReviewed in the United States on November 14, 2013
4.0 out of 5 stars
EDGE OF ETERNITY
Verified purchase
I was around 17 when I seen this movie.My memory of course was the Madnificent GRAND CANYON.I was there back in 2004.Never seen a cable car.However I suppose back in the 1950's there was one.A very entertainting movie.Colorful in WIDESCREEN.A great print.Cornel Wilde whom I liked as an actor..seen a little lay back for the plot but in general I would say if you like the 1950's Noir kind of movie as I do for sure...Buy it..you won't be disapointed.Thankyou-Jack
4 people found this helpful

G. DavisReviewed in the United States on July 26, 2018
5.0 out of 5 stars
Nice and Fun
Verified purchase
Short (1 hour 19 minutes), fun movie. Nice time capsule of canyon country in the 1950s. Good picture quality for an old, lesser-known film. The DVD doesn’t have a menu, but it does have chapter markers, so you can skip forward to where you left off.