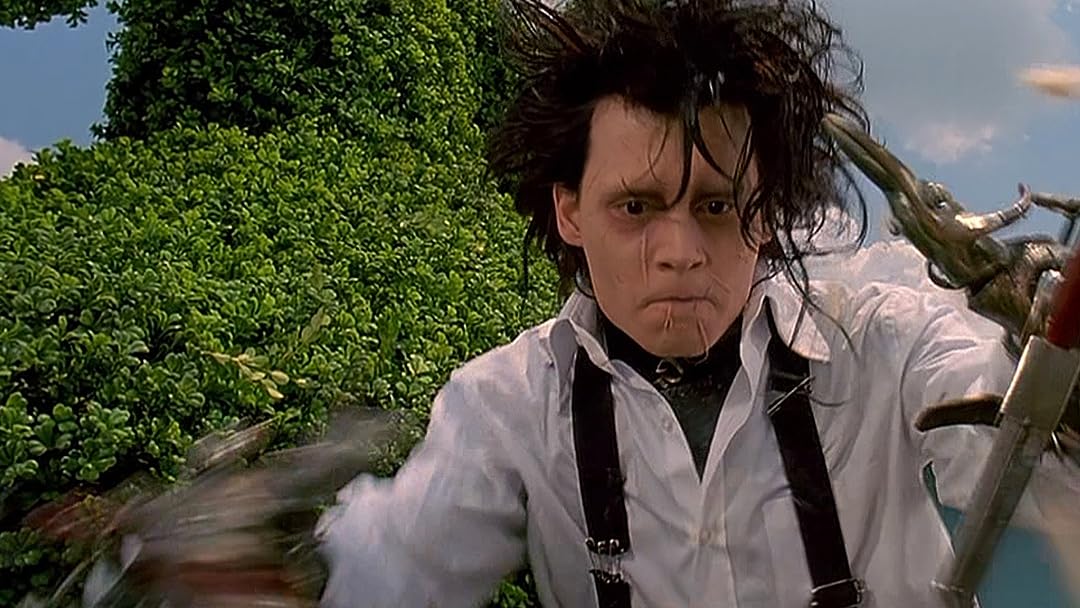 ONESFUTUREReviewed in the United States on March 7, 2019
5.0 out of 5 stars
Tim Burton. Keep being you.
Verified purchase
An ASMR adddict whos character is a metaphor for what it's like to live as a POC gets lured by the snake charming soft spoken tones of an ill equipped, pyramid scheme victim, whos loving yet driectionless life has her believing that bringing our main character into the belly of middle class mediocrity will cure him of the loneliness he must feel,or more than likely, what being projected on to him.
And bonus, he meets a girl...who's currently dating the manifestation of white privilege incarnate.
He throws a BBQ
He gets a job being a barber.
Tries to get a loan.
Some things happen.
A woman accues him of rape.
He commits a crime
He gets locked up.
Some more things happen.
Another POC give him an out.
Then, bam, the End.
Spoiler alert:
Things don't work out and he goes home.
I don't think anyone was surprised by that.
It's like bringing a booty call to a family reunion. You already know what it's going to be from the jump.
Still love this movie tho, and the Depp is dope!
10 outta 10

mojo jojo Reviewed in the United States on December 19, 2018
5.0 out of 5 stars
Burton knocked it out of the park
Verified purchase
I have always loved Tim Burton's style, and I'd never had a chance to watch this film until now. This is one of his best, by far. I knew I'd love it. Poor, poor Edward. It has the tragic love element of Phantom of the Opera (think "Christine, I looooove youuuu...."), with the horror of Frankenstein, in garishly pastel 1950's suburbia. AMAZING.

Gah, I loved the naive, sweet, well intentioned Peg, the removed-but-friendly dad... gosh, they really tried to do their best, but gossip and prejudice is such poison, especially for someone as different as Edward. GAH, he was so soft, so precious. I wanted to protect him at all costs, but I had no illusions that this ending would be happy.

I felt that Edward's love for Kim was underdevloped. but I guess it was sufficient for the type of movie this was. It wasn't a grand romance like the Notebook or something, but more like a tragic love story with a focus on the fickliness of human nature. For more than half the movie, Kim was nothing but wishy washy, swayed by her douchebag boyfriend, kind of rude to Edward... a typical teenager. I guess that's fair. The only reason Edward could have fallen in love with her is the fact that he'd never seen a beautiful young woman in his life. I wish Kim could have been stronger, and saved Edward from the fate her own fickliness basically caused.

Overall, visually stunning, funny, dark, tragic, and quite a bittersweet ending. Some mature, suggestive bits but nothing explicit. Probably 13 and up.
9 people found this helpful

joel wingReviewed in the United States on September 5, 2020
5.0 out of 5 stars
Great fantasy challenging middle class suburban life
Verified purchase
Edward Scissorhands was a great fantasy tale by Tim Burton starring Johnny Depp as Edward. Edward was created by an inventor who died forcing Edward out into the wider world. He’s found by a local Avon saleswoman who takes him in to live in the local suburb. That in fact is what the movie is about, it questions the middle class suburban American lifestyle.

The movie contrasts Edward with the suburb. He’s an innocent who knows nothing about the world outside of the house he was invented in. He wears an all black S&M type outfit, has pale white skin, and has blades for fingers. He looks menacing even though he’s like a child. The town on the other hand has houses that all look alike. They’re full of stay at home women who like to gossip. It’s characterized by conformity which Edward is about to shake up.

Movie really is a great tale and Depp was perfect for the part. It had the characteristic weirdness of Tim Burton as well.
4 people found this helpful

s3opsReviewed in the United States on October 8, 2020
5.0 out of 5 stars
Tim Burton's most brillant piece. A parody on social conformity.
Verified purchase
As a child I watched this film, and recently viewed it again. I sat with a smile on my face for the entire movie and reflected on Tim Burton's genius.

Society is represented as a simplified version of a color-coded suburbia with people filling uniform, conforming roles, acting out routine in mechanical fashion.

Edward represents a behavioral outlier and a danger to society: the introverted artist to whom society is the danger. Separation is the only safe compromise.

youarenotwillReviewed in the United States on December 22, 2020
5.0 out of 5 stars
Amazing piece of cinema!
Verified purchase
You've probably heard a bunch about this movie so I'm just going to highlight some of my favorite things about it.
·This is Danny Elfman's favorite work he ever did.
·Johnny Depp's first weird role.
·Full of great one-liners.
·The color saturation is gorgeous.
·Perfectly cast for every role.
·Vincent Price!
3 people found this helpful

Amazon CustomerReviewed in the United States on April 8, 2018
5.0 out of 5 stars
still fun
Verified purchase
Very original. One of Tim Burton's best films. Frankenstein meets the Avon lady with a big bucket of the absurd... add some Dr. Seuss and Disney and mash up with some Poe and Roald Dahl... and there goes the essence of Tim Burton. Mixture of many contrasting things and yet still so wholly original. I love this guy!

Great cast of characters here. If I could change anything it'd probably be Winona Ryder's terrible bleach job here... ack. What an injustice to her dark yet doe-eyed beauty. I wish they'd given her black hair instead.

Still fun to watch after all these years!
4 people found this helpful

DorsiaReviewed in the United States on September 5, 2016
5.0 out of 5 stars
A must watch for all
Verified purchase
Looking back I realize that Edward Scissorhands is a movie that in many ways defined how the 90s would stand apart artistically from the 80s.... Tim Burton, Johnny Depp, Winona Ryder, Danny Elfman, Dianne West, Anthony Michael Hall.........what more could one ask for. Even though this film is clearly based on Frankenstein, the story is so outlandish that it stands on its own.... I don't think that Burton ever topped this work, but most of his work is so good that I might say the same about his other movies if the chronologic order was different. I rewatch this movie every 5 years or so and every time I do it brings back the melancholy I felt the first time I watched it..... Watching this movie is a must for any fan of dark drama/humor...
2 people found this helpful

R-Suarez-Reviewed in the United States on April 17, 2006
5.0 out of 5 stars
A great piece of collection
Verified purchase
Some years ago there was a release of this film for its 10th anniversary, we now have what is supposed to be a new edition to commemorate the 15 years of this Tim Burton classic fairy tale.

We talk about a fairy tale in a Burtonesque style, for those familiar with his works (and specially his lovely poem book "The melancholy death of oyster boy") the story of this film should not be unexpected. A young man comes to town who instead of hands has scissors, you can then imagine how difficult can it be for this guy to express himself with this physical "limitation", the metaphor Burton uses in this character is simply beautiful and the story and the turns it takes have made it the classic it is considered today. Filled with classical Burton visuals and humor (there's a part of the film in which we get to listen Tom Jones' "With these hands" while a woman tries to seduce Edward) it is a compelling love story with an ending that will break your heart.

As for the extras offered in this so called "new" edition, they are the same from the previous one! The disc contained here is the exact same disc released for the 10th anniversary. Even though the physical presentation is different, the contents and menus are exactly the same. As an added value we now have the beautiful white tin case and 6 postcards with pictures from the film in a very nice envelope. Having said that, it is now your choice if you buy this or not, I had to sell my old edition to buy this one, I personally believe the cards and the case are a nice added value, though I was not willing to have two copies of the same film.
4 people found this helpful
See all reviews
Back to top
Get to Know Us
Make Money with Us
Amazon Payment Products
Let Us Help You
EnglishChoose a language for shopping. United StatesChoose a country/region for shopping.
© 1996-2021, Amazon.com, Inc. or its affiliates