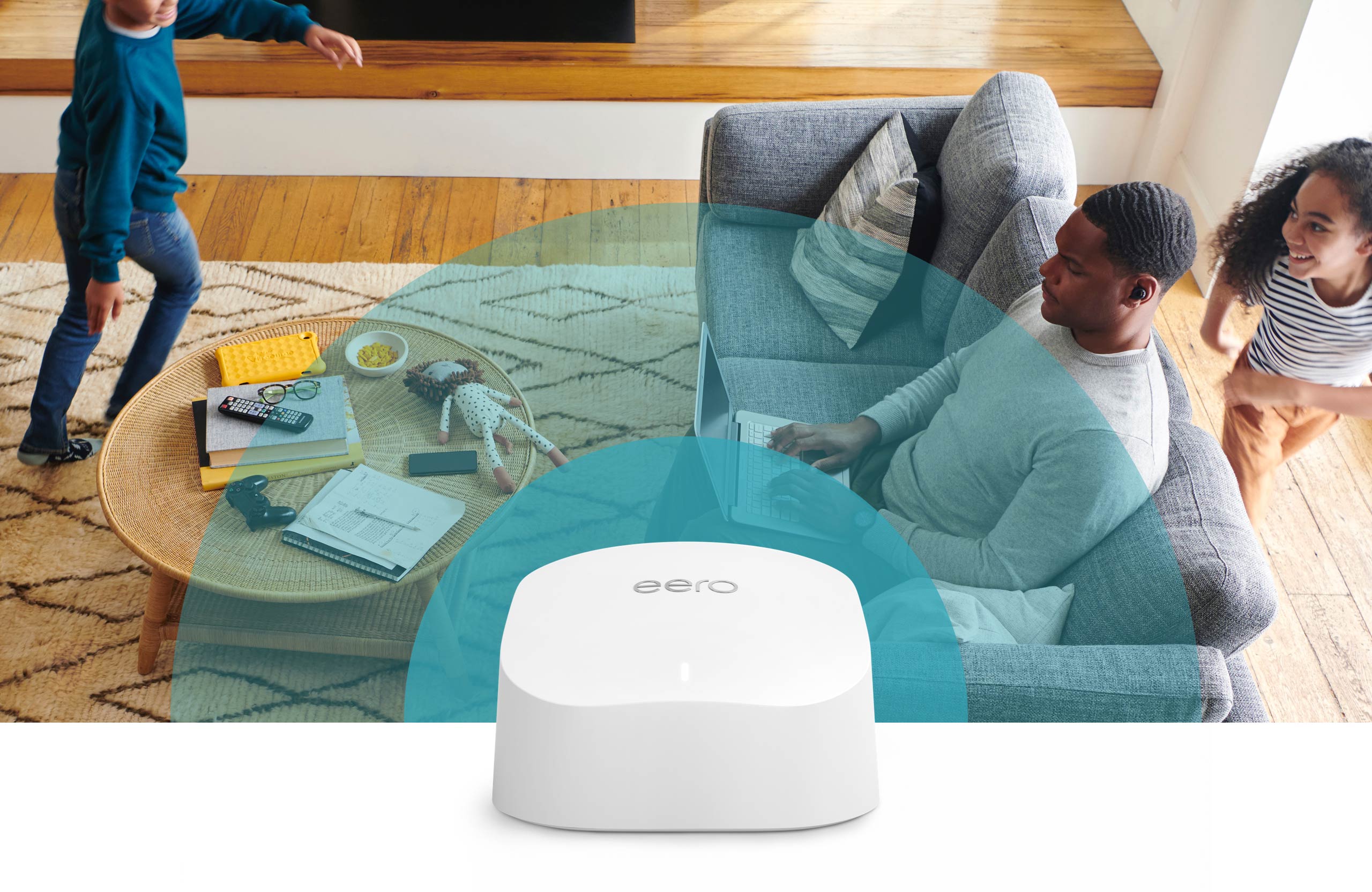 Give your home the connectivity it deserves

Say goodbye to dead spots and buffering—even when the whole family is online. As you add more devices, your connection stays strong and doesn’t slow you down.

Easy to set up and use

4.6 out of 5 stars
4.6 out of 5
1,567 global ratings
How are ratings calculated?
To calculate the overall star rating and percentage breakdown by star, we don’t use a simple average. Instead, our system considers things like how recent a review is and if the reviewer bought the item on Amazon. It also analyzes reviews to verify trustworthiness.

JTF
2.0 out of 5 stars Actually degrades performance
Reviewed in the United States on October 9, 2021
Verified Purchase
I have an Eero 6 Pro router. This works fairly well but in the upstairs bedroom and corner office, there are times when the performance significantly lessens. So, since this is a mesh Eero network, let's get these additional extenders. I tried it with the regular extenders first - not good. Next, I discovered that there were WiFi 6 versions. Cool, those must work better. No.

No, some caveats. I have gigabit fiber coming into the house, so my expectations are high. The non-wifi 6 versions were rated at up to 350 while the wifi 6 versions were rated at up to 500. On two different wifi 6 devices, iPad Air 4 and iPhone 13 Pro, that could get 500 Mb/s to 600 Mb/s near the main router get 120 Mb/s with the extenders and 200+ Mb/s without. Not good. Since I get relatively good speeds, why get extenders, because it's not consistently good. I'm not sure the root cause but there are times I get less than 20 Mb/s down and I think the extenders can help with really poor connections and more consistency, but I'm not willing to give up speed for most of the time to get better speed on those occasions. (I did verify it's not the incoming fiber with a speed test on a device connected via ethernet).

Here's the kicker, these devices are no better than the crummy AT&T externders you by for $50.
Read more
10 people found this helpful
Helpful
Report abuse

Andrew
2.0 out of 5 stars Stay Away!!! If your house is like mine, you will regret this purchase.
Reviewed in the United States on November 13, 2021
Verified Purchase
I bought this system in August and I have had nothing but problems with it. Yes, there are some good features -- when it's working, it's fast and I have great coverage. My ring doorbell works much better with this system than my prior system (which was Verizon Fios wifi). The interface is better than Verizon's. One positive for Eero's tech support is that (for the most part) they are patient and will stay on the line to help with your problem, even if it has to do with another company (like Harmony or Sonos). Probably some other positives too.

But the negatives greatly outweigh the positives. I have spent probably 100 hours on tech support troubleshooting problems. Generally, the people are kind of dumb. One time, she asked the color of the RED. I responded red. She asked if it's plugged in. I said, "How could the LED be on if it's not plugged in?" She agreed she was just following the script and not really thinking. They will tell me one moment that I need to space the devices apart, and then to troubleshoot, they tell me to move them closer together. It's just pure trial and error and they really know little about my problems and headaches. Of particular problems are the Harmony remotes (2 of them), Sonos system (10 devices), and Alexa devices (10 devices). The Alexa is the worst, and the irony is that they are both Amazon companies. Just one problem after another with little to no progress despite hours spent with tech support (either Alexa or Eero or Sonos or ...). I want to give a positive call-out to Sonos that they were probably the best in all of this but clearly the root problem is Eero.

Most recently, I was told that some of the Verizon functionality I had before will not work with Eero. Yet another tradeoff that no one mentioned previously. It's really over the top bad.

If you have a verizon wifi (TV+cable) with a moderately complex house in terms of devices, I recommend sticking with it. Yes, it's more expensive and it doesn't work as well in some respects, but you will avoid one headache after another. The money I spent on Eero was probably the most wasted and regretted purchase of my life.
Read more
9 people found this helpful
Helpful
Report abuse

Brandon J Elliott
1.0 out of 5 stars Range/speed are non-existent
Reviewed in the United States on July 21, 2021
Verified Purchase
Covers 2000 sq ft? Not a chance - doubt it would even cover 2000 sq ft. if an open room! This thing is horrible and not even close to being worth the $229 price tag - & that's before we talk about the accessibility of settings, connections, etc. I installed both this item and an additional 6 pro in a 2700 sq ft home and speed was reduced by 92% just 30 feet away. The direct connection wasn't much better. Want to connect a Ring doorbell or some Blink cameras? Forget about it!

In order to cover my house properly with this system, I would need to invest upwards of $1300. If I'm going to spend that kind of money, I'm going to use Ubiquiti - at least I know they're true to what they advertise.
Just can't put into words how disappointed I am in this product.
Read more
11 people found this helpful
Helpful
Report abuse

Ian Ollmann
4.0 out of 5 stars Excellent, but parental control filters occasional troublesome
Reviewed in the United States on February 25, 2021
Verified Purchase
This greatly improved our home wifi over our previous AC-3200 hub. Top ranks for speed and coverage.

The problems we have with it arise from the parental controls which can be a bit clumsy and over-broad. You can set it to turn off streaming media, social, games, and such as categories. However, we often find the kids classwork is grouped up into these settings. The other day I had to open up the Adult Content and Criminal restrictions before my child could attend class. Maybe they are trying to tell me something, but I think it more likely the filters are overly broad.

The product would be greatly improved by allowing me to whitelist specific sites so that the Adult and Criminal content that my children need to access for their education at public school can be used. It also would shorten the time I have to spend during my Childs online exam figuring out whether the exam is blocked because it is a game, social media, criminal, porn or hate speech. It would be ever so nice to be able to pick and choose which hate speech or criminal my child is exposed to. The blanket prevention means that for practical use, I am often force to license all hate speech and criminal activity, and there is some of it that I do strongly object to. The rest, like my child's online exam, might serve some productive purpose.

To the engineering zealot who believes that if only they could get the filters right, there would be no need for a whitelist: The whitelist is the tool you need to fix the filters. You can scrape together the anonymized whitelists from your customers and use it to quickly identify the website content which does not fit the categories ascribed to them, or which are necessary for other basic functioning of the common case web usage.
Read more
5 people found this helpful
Helpful
Report abuse
See all reviews
Back to top
Get to Know Us
Make Money with Us
Amazon Payment Products
Let Us Help You
EnglishChoose a language for shopping. United StatesChoose a country/region for shopping.
© 1996-2022, Amazon.com, Inc. or its affiliates