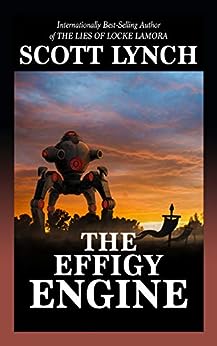 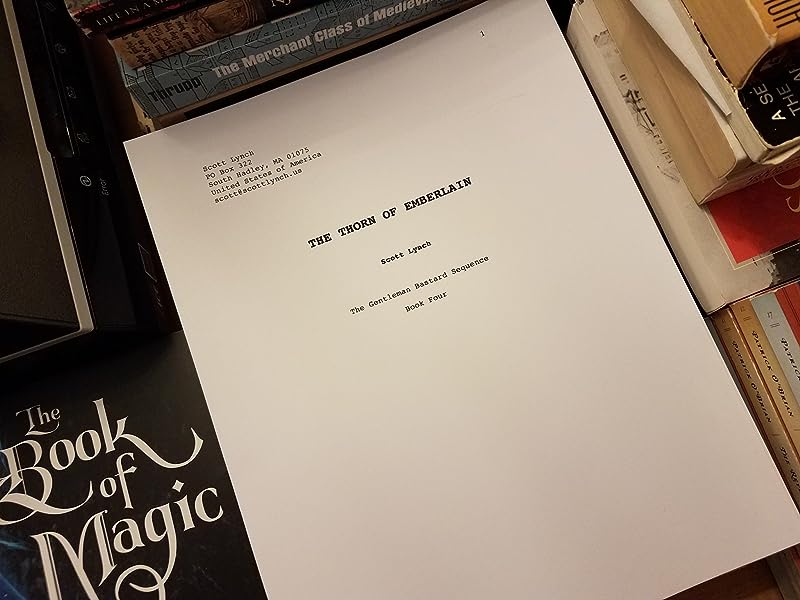 The Effigy Engine: A Tale of the Red Hats Kindle Edition

4.4 out of 5 stars
4.4 out of 5
121 global ratings
How are ratings calculated?
To calculate the overall star rating and percentage breakdown by star, we don’t use a simple average. Instead, our system considers things like how recent a review is and if the reviewer bought the item on Amazon. It also analyzes reviews to verify trustworthiness.
Top reviews

Josh Mauthe
4.0 out of 5 stars Lynch's homage to Glen Cook stands on its own and then some
Reviewed in the United States on July 3, 2019
Verified Purchase
The Effigy Engine's dedication to Glen Cook should tell you what's obvious as you read - that this is Lynch's tribute to The Black Company books, with his own band of mercenaries (called the Red Hats) being drafted into a war and discovering that the other side has invented what's essentially a tank, changing the face of the war. A novel concept, for sure, but as ever, Lynch is more interested in his characters and their relationships, which is to the novel's credit, because that's what makes The Effigy Engine truly work.

That's not to say that the battle sequences aren't effective (they are), or that exploration of how a mechanized tank would change war in a magical world isn't intriguing (it is). But really, what I came away from The Effigy Engine thinking about was the characters - the magic-wielding comrade whose beard has become a replica of an armada, our wryly funny narrator Watchdog who explains to us just how magic works here, or the commander who's quite literally a mother figure to him. The Effigy Engine might be a novella, but that short length doesn't keep it from building out a great world quickly, and giving the sense that there could easily be plenty of stories to come in this series - and I'd definitely pick them up.
Read more
3 people found this helpful
Helpful
Report abuse

JOSEPH VANUCCHI
5.0 out of 5 stars Of course,greed!
Reviewed in the United States on December 26, 2018
Verified Purchase
Definitely enjoyed this. I'll repeat the I'm sure broken record just wanting MORE. The novels were great, this world very interesting also. The paragraph with the arcane bracelet could spawn many books by itself! I guess it's good that I've never highlighted anything, I personally enjoy lines like "shaking like a barstool with delusions of grandeur" . Guess that's not as literally appealing, classically, or some such thing. LOL. I would definitely recommend it.
Also I, along with my dog Goblin and cat One-Eye, appreciate the shout out given in the dedication! I'm sure it was appreciated and rightly so.
Apologies for this horribly rambling review!
Read more
One person found this helpful
Helpful
Report abuse

Conrad "Tuftears" Wong
5.0 out of 5 stars Thoroughly amusing
Reviewed in the United States on September 17, 2018
Verified Purchase
A band of mercenary mages are pitted against a juggernaut with a minimum of forewarning. Can they win or is it all over for the underdogs they have been championing? While this is a short story, it definitely provides plenty of banter, world building, and style. Well worth the purchase for me.
Read more
One person found this helpful
Helpful
Report abuse

mabg
3.0 out of 5 stars just okay for me
Reviewed in the United States on September 30, 2018
Verified Purchase
I think I just don’t particularly like this genre, so it would have to be very good for me to like it, and this isn’t. It’s okay and I liked the characters, but the story is short and not enough happens in it to really make you care. The Watcher almost gave me enough, with his mother being the Red Hat leader, but it just missed, IMO.
Read more
Helpful
Report abuse

tilla
4.0 out of 5 stars A fun read but
Reviewed in the United States on December 9, 2019
Verified Purchase
This was quite a fun short novella. The narrator is a wizard and part of a mercenary band fighting for a country invaded by a much larger and better-equipped force.

However, I'm still waiting for the next in the Gentlemen Bastards series. If Mr. Lynch has abandoned that series, I do wish he would let people know
Read more
Helpful
Report abuse

Blue Eyes
5.0 out of 5 stars Red Hats are a group of mercenary wizards
Reviewed in the United States on January 21, 2021
Verified Purchase
Who hire out to the underdogs to help them win wars. This is the story of one battle against the Iron Ring and their war machine. Taken from the notes of the wizard Watchdog.
Read more
Helpful
Report abuse

SacredCaramel
4.0 out of 5 stars Quality over quantity
Reviewed in the United States on January 11, 2019
Verified Purchase
Scott Lynch is not a prolific author, but he is a fantastic one. This study is no exception and I was sorry to see it end. It was well worth the paltry sum removed from my purse. Its length was the only reason it didn't get five stars. I want more of this world.
Read more
Helpful
Report abuse

Karl Dandenell
5.0 out of 5 stars Perfect diversion
Reviewed in the United States on September 20, 2018
Verified Purchase
Scott Lynch is an excellent modern fantasy writer. His humor, his worldbuilding, his characters all work together exceedingly well. This short tale is one of what we hope is a series of stories of the Red Hats, a group of mercenary wizards. Highly recommended.
Read more
One person found this helpful
Helpful
Report abuse
See all reviews

Randal
4.0 out of 5 stars Short
Reviewed in the United Kingdom on June 7, 2019
Verified Purchase
A short story (or maybe a novella) featuring the Red Hats a company of magical mercenaries who fight for right against might. The narrator of this story (and chronicler of the Red Hats) is Watchdog. On this occasion they are fighting with the Elarans against the Iron Ring when a new war machine is deployed against them, a huge tank-like machine. There's not much room for character development in such a short piece by the author introduces Runstandel, a wizard exceedingly fond of himself and somewhat annoying, Tariel a musketeer and the leader of the company, the sorceress Millowend, who also happens to me Watchdog's mother. These four have to figure out a way to defeat the war machine.
Read more
Report abuse

Oliver Lea
5.0 out of 5 stars Scott Lynch's trademark wit
Reviewed in the United Kingdom on December 19, 2020
Verified Purchase
Lynch has an amazing way with words that seamlessly paints a scene and a story and has you chuckling at the same time. This story is a very different creature to the Gentleman Bastard series and merges the grim and gritty atmosphere of war with a cleverly incorporated high-magic element. An array of entertaining characters deliver this setting in a way that left me wanting more of the same.
Read more
Report abuse

PD Fry
3.0 out of 5 stars Its no Locke Lamora
Reviewed in the United Kingdom on October 17, 2018
Verified Purchase
I purchased this book on the back of the Gentleman bastards series which I absolutely loved. If you are interested in a good story well told then it is to this set of books I personally would go. I found the concepts in the red hats interesting. The characters had a humour about them and the story was fairly straight forward. In the end though it didn't capture my imagination. It was good but not that good.
Read more
Report abuse

Mike P
5.0 out of 5 stars Great to read more of Scott Lynch's work
Reviewed in the United Kingdom on July 7, 2020
Verified Purchase
An enjoyable short story which had an easy to read flow to it. I enjoyed the idea of a magical arms race as such.

A must read if you are a Scott Lynch fan.
Read more
Report abuse

Stonewielder
5.0 out of 5 stars Another great short story from Lynch
Reviewed in the United Kingdom on June 29, 2019
Verified Purchase
Scott Lynch is one of the finest fantasy writers around at the moment, and this short story is another delightful dash of wit, energy and imagination.
Read more
Report abuse
See all reviews