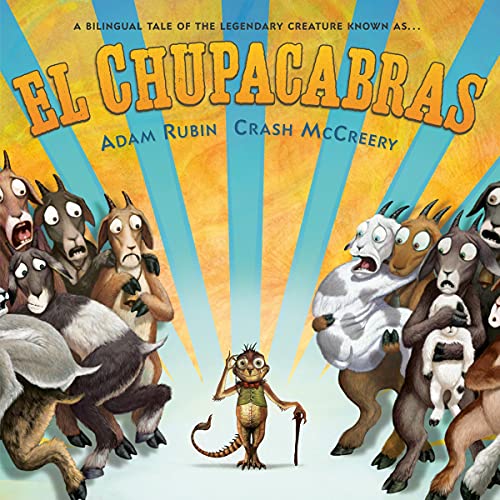 Adam Rubin (Author, Narrator), Listening Library (Publisher)
4.7 out of 5 stars 175 ratings
See all formats and editions
Sorry, there was a problem loading this page. Try again.

From the best-selling author of Dragons Love Tacos comes a whimsical retelling of the chupacabra folktale, written in a blend of English and Spanish.

A long time ago, a girl named Carla lived on a goat farm with her father, Hector. One night, a goat disappeared from the farm and turned up flat as a pancake. Only one creature could do that - El Chupacabras, the goatsucker! Legend has it that El Chupacabras is a fearsome beast, but you can't believe everything you hear...and sometimes the truth is even more interesting.

Told in equal parts English and Spanish by best-selling author Adam Rubin, this lighthearted take on a modern legend is not told in the traditional bilingual style.

Each sentence is half-Spanish, half-English followed by a repetition of the same line translated the other way around. This mirroring technique allows the languages to intermingle equally. A fun and unique way to introduce either Spanish or English to new listeners.

A note from author Adam Rubin: "I decided to tell this story in an unusual way to explore the beauty of harmony. It's easy to dismiss the unfamiliar, but compassion takes a little more effort. With so many people trumpeting divisiveness right now, it's more important than ever to teach kids that there is more than one way to understand the world."

Your audiobook is waiting!
Learn more about membership
List Price: $7.00
You Save: $0.87 (12%)
By completing your purchase, you agree to Audible’s Conditions Of Use
Sold and delivered by Audible, an Amazon company
Share

WENDY ANDERSON EPSTEIN
5.0 out of 5 stars A terrific bilingual folktale.
Reviewed in the United States 🇺🇸 on August 22, 2021
Verified Purchase
Hilarious! The illustrations are the perfect companion to this wonderful addition to the many tales of El Chupacabra. I will enjoy reading this to my bilingual elementary age class.
Read more
Helpful
Report abuse

Amanda Burrier
5.0 out of 5 stars I only read the English
Reviewed in the United States 🇺🇸 on September 24, 2020
Verified Purchase
I speak English and read English, I do not know Spanish but my son loves Adam Rubin books. I thought I would give this book a chance knowing it was written in both languages. I have managed to be able to filter through the writing style and only read the English. If you are able to do this, this book is hilarious. My 5 year old son loves it too.
Read more
One person found this helpful
Helpful
Report abuse

Jeffrey
5.0 out of 5 stars Funny!
Reviewed in the United States 🇺🇸 on June 16, 2021
Verified Purchase
Funny book, interesting writing style with English and Spanish intermixed. A must have for your collection. Great pictures.
Read more
Helpful
Report abuse

Buffy
3.0 out of 5 stars Don’t get this one unless you want to freak your children out
Reviewed in the United States 🇺🇸 on August 6, 2020
Verified Purchase
This book is pretty intense for the little ones. The little animal sucks the life/air out of goats so that came as a surprise when I was reading it. I tried to abandon it in the middle because of that but I was already so far and that the kids demanded that I go on. So I think if you have an eight 910-year-old this might be funny for them but not for anyone younger than eight. Also the book is in English and Spanish but the rhythm of those two languages is often mixed. So it was a little tough to read.
Read more
One person found this helpful
Helpful
Report abuse

B. J. Bueno
5.0 out of 5 stars This book is so much fun, as you get to read in two languages inside one great story.
Reviewed in the United States 🇺🇸 on March 29, 2018
Verified Purchase
We all know that El Chupacabras is a fearsome beast, but you cannot believe everything you hear...

This book is so much fun, as you get to read in two languages inside one great story. We got this book for our two little ones (2 and 4) They loved the story; especially when the Chupacabra dips his churros in chocolate (My kids loved that). Filled with magic and adventure this book is a fun read, and your kids get to learn new words and meet new friends.
Read more
5 people found this helpful
Helpful
Report abuse

Zenaida
5.0 out of 5 stars Love this!
Reviewed in the United States 🇺🇸 on May 24, 2021
Verified Purchase
Loved it !!
Read more
Helpful
Report abuse

Bethmcjam
4.0 out of 5 stars Very cute book.
Reviewed in the United States 🇺🇸 on July 9, 2019
Verified Purchase
My grandchildren (ages 7 & 8) love this book. The artwork is very good and the story is creative. It looks rather scary, but is quite cute and funny. I recommend this book.
Read more
Helpful
Report abuse

Schlimm
1.0 out of 5 stars Content
Reviewed in the United States 🇺🇸 on April 1, 2022
Verified Purchase
Pls update description of book context. I bought it to use in my classroom and was surprised that it discussed sucking blood, etc. was weird. Thought, based on description, would have been more playful. “Sucking blood” to an elementary kid can be scary and confusing. They have such active imaginations. It doesn’t matter if the “animal” is myth or real to them.
Read more
Helpful
Report abuse
See all reviews