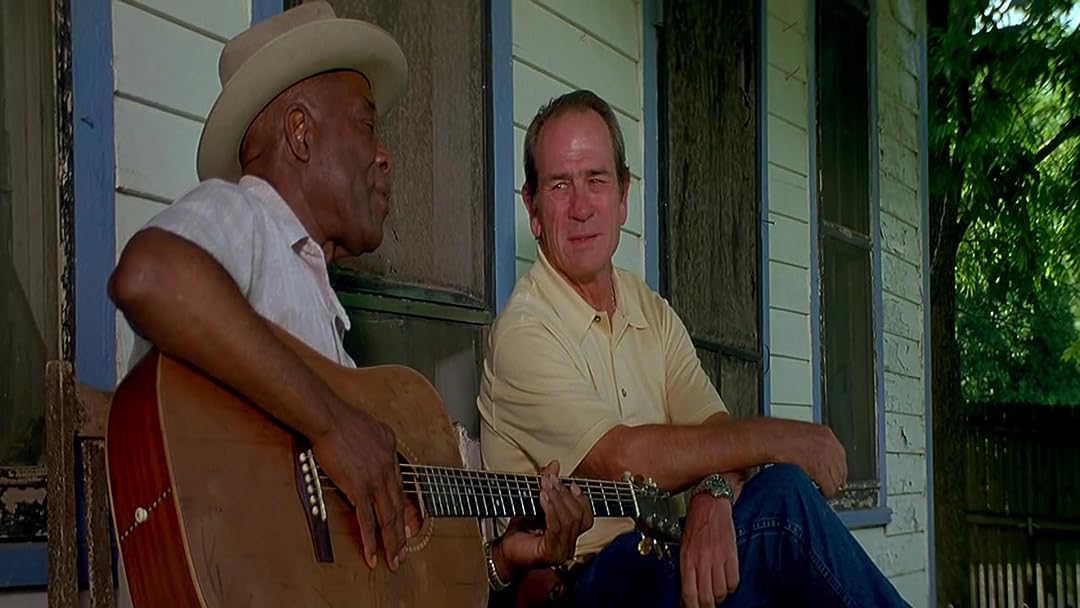 In the Electric Mist

(1,726)
6.11 h 42 min2009X-RayR
While on an investigation into a series of grisly murders, veteran detective Dave Robicheaux (Jones) navigates his way through the Louisiana bayou and the dark, sultry world of New Orleans mobster "Baby Feet" Balboni (John Goodman). A tangled web of killings, past and present, converges in a shocking showdown with stakes that become deeply personal to Robicheaux and his family.

joanReviewed in the United States on May 5, 2019
5.0 out of 5 stars
Excellent
Verified purchase
If you're a Tommy Lee Jones fan this is purely Tommy Lee. And if you'e a fan of the books by James Lee Burke (and you should be) you'll love this. Burke's character Dave Robicheaux is the protagonist of a series of wonderful fiction by Burke. New Orleans and Iberia Parrish and Louisiana come alive in his books. He's one of the best authors around of southern fiction. Please watch this to the end, its really great. BTW Leon Helm as John Bell Hood pronounces "cavalry" as "calvary"as in the hill where Christ was crucified. I wonder if anyone noticed when they saw this? Just me? LOL
45 people found this helpful

Janice KayReviewed in the United States on May 27, 2018
3.0 out of 5 stars
Mildly entertaining at best
Verified purchase
Other reviews compare this movie to the masterful novel by James Lee Burke, which is unfair and absurd. I read the novel twice; it was that good. I was transported for many hours into the murky magical world of Burke's southern Louisiana, deep into its history, experiencing the feelings and sights and sounds through the finely drawn, complex characters fleshed out upon the pages, learning more about history than I ever had in a classroom. No movie could possibly have done justice to this work of literature at its finest. But this movie doesn't even try. It gets three stars mostly because Tommy Lee Jones manages to squeeze the most out of what he was given to work with, as he always does. The characters are reduced to stereotypes. The absence of Clete is sorely felt, but I am also relieved not to have been subjected to how this movie would have reduced him to a pale shadow as it did the other characters.
47 people found this helpful

Ron BakerReviewed in the United States on April 23, 2019
4.0 out of 5 stars
Crime in the swamp
Verified purchase
I'm always fascinated watching Tommy Lee Jones. His matter-of-fact manner, his slow drawl, his never-speak-a-word-that-need-not-be-said stoicism works particularly well in this film. There is a really well known veteran cast here and the crime mystery is compelling. Well done and entertaining film. Recommended.
31 people found this helpful

jsngglttReviewed in the United States on May 2, 2019
2.0 out of 5 stars
Hard to know who to blame
Verified purchase
Someone wanted to tell this story well. They assembled what should have been a great cast to tell a haunting story of murder, revenge and redemption. Unfortunately what they ended up with was a Fantasy Island episode shot in the bayou.

Perhaps something profound was lost in the editing process or perhaps Bertrand Tavernier should stick to making films in French. I really can't put my finger on who ruined this movie (perhaps it was a group effort) but one thing is certain, they succeeded.

Richard JensenReviewed in the United States on April 26, 2019
4.0 out of 5 stars
Solid, if a bit disjointed story, and Jones shines
Verified purchase
Of course, Jones upgrades everything he's in. You get immersed in the deep South, with its murky history that has tendrils laced through the present. The story is a bit disjointed, but it pulls together in the end. It doesn't feel like that was by design, though, which is the primary reason for one star off. Overall, though, this is a success. Very good acting, immersive cinematography, and a story that ultimately works. And, frankly, Jones could pull off a movie consisting of nothing more than a few guys shoveling dirt from one pile to another, as long as Jones was one of those guys. Definitely worth your time!
27 people found this helpful

D. LarsonReviewed in the United States on May 31, 2019
3.0 out of 5 stars
Kind of disjointed, except for the truck
Verified purchase
I’ve had Ford trucks, I’ve got a Chevy truck now. Never had a GMC, but my brother-in-law has one, and it’s a pretty sweet ride. Tommy Lee Jones must think so too, because fully a fifth of “In the Electric Mist” running time consists of Tommy driving in his GMC, parking his GMC, standing around his GMC…

Considering that running time is short, there are a whole lot of arrival scenes of Tommy Lee Jones driving and arriving. And yet, this movie scans like large chunks of the exposition and police procedural have been edited out. Or never shot at all. Voice-overs move us from one spot in the timeline to the next, with only the pickup moving us along. Strange, and not that effective.

Unlike some reviewers, I’ve never read the book. So maybe that’s a faithful adaptation of James Lee Burke’s novel. Or not. But the narrative is disjointed and for once, the voice-over is necessary to keep us up with the missing exposition.
The plot is pretty straightforward southern gothic, missing girls turning up dead, body in the bayou, sinister powerful men with accents. Nothing not seen before. What does set this picture apart is the appearance of a dead Confederate general. Truly a “What th’?” moment. I suppose General Hood’s ghostly apparition does set “Electric Mist” apart from the average swamp murder movie. But….I do not get the point of it. The book must explain it better. Is this supposed to be an LSD hangover in Tommy Lee’s head? Or do the Confederate dead really walk the swamps? And if so, why appear to Tommy Lee Jones?

And would the honorable General approve of Tommy Lee planting evidence, beating suspects, using throw-down guns, breaking and entering, beating John Goodman? Hard to say. I guess ends, means, justified. Deputy U.S. Marshal Raylan Givens would’ve done the same things, probably. This is an odd movie, and not a very successful one. The plot makes little sense, or maybe that parts left out would make it more believable. Taking one point, where Tommy Lee shoots up a Buick and supposedly a witness, wouldn’t even backwoods Louisiana forensics made if obvious Tommy didn’t kill her? Like, ballistics? So why go to all the trouble instead of just disappearing the informant? There’s a bayou on every corner. Ditto shooting a cop from ambush. How much more attention can any perp draw to himself than shooting at the police? Every law enforcement in Louisiana would converge on the parish and not stop until Murphy Doucet was alligator chow. Even more so, kidnapping a police’s child. And rolling up on the desperado’s hideout with no backup?

I watched because of John Goodman, who’s usually entertaining, and Tommy Lee Jones, who has the most extensive earlobes on anyone except a basset hound. He’s not fully into his “No Country for Old Men” laconic competent phase, but you can see it through the “Electric Mists”. Goodman is kind of disappointing, a rote performance of a sleazy degenerate that he could do in his sleep.

And the whole production looks like a TV movie. Speaking of movies, the movie-within-a-movie thing is referred to only in passing. Except for some set trailers, we see nothing of what would be the biggest deal in the parish ever. With Hollywood stars and Mafiosi and all. Peter Sarsgaard really hung around to finish this unseen movie even after his long-time companion Kelly Macdonald gets killed? That’s dedication to the craft. Sarsgaard is pretty blah as the drunk movie star. Macdonald’s part is almost as underwritten as Mary Steenbergen’s, women who exist to expostulate with the men (and in Macdonald’s role, get killed for their trouble). Always nice to see Ned Beatty, though, even though it’s pretty much a cameo. Aside from Jones, I don’t think any actor gets as much screen time as the nice GMC. But I like that model, so I’ll throw in an extra star.

admanReviewed in the United States on January 16, 2020
1.0 out of 5 stars
Every cliche imaginable executed to abysmal results... what a waste of screen talent
Verified purchase
I don't know whether to criticize the poor, choppy editing, or the wasted efforts of some well-seasoned actors; maybe it's the low-budget feel of the overall product or the cookie-cutter southern characters and dialogue; but this movie was terrible from beginning to end. It started with trite cliches and delivered nothing for its trouble. Albeit a talented veteran group, this movie was miscast, being way too old for the characters, way beyond belief-suspension. John Goodman has a cottage industry going -- playing big bad boss-men. Unfortunately, the script left little to the imagination in lieu of Hollywood formulaic southern drawls.

Tommy Lee Jones, 73, and Mary Steenburgen, 66, are supposed to be believable as geriatric parents of a preteen child because Mary gets all neck-line sexy in the first frame? Oh, that explains it. Tommy's an ex-alcoholic cop. I've never seen that before. Cliche-wise, every old white guy was a stereotypical racist, flipping the n-word ad nausea, and every old black guy was a cryptic blues-guitarist-sage or bayou-wise-man; Levon Helm pitched in as the only non-racist white yoda, except he was in a confederate uniform -- so there's that. I half-expected the old dudes to have kiddies running around too, considering the geriatric Viagra-like benefits of the voodoo-tainted bayou water -- thereby better-explaining the hallucination Civil War flashback scenes. All the women doted over their alcoholic men, forgiving their transgressions with a simple apology. Um hum. Peter Sarsgaard stumbled through all his scenes afraid to raise his head and be recognized. I don't blame him.

After all, it is Louisiana a la Hollywood. That's what they have in the South. Tommy Lee Jones is from Texas. I suppose that's practically Canada to most folks but the neighbor should know better. This movie is a waste of time, folks.
9 people found this helpful

Todd M.Reviewed in the United States on April 20, 2019
4.0 out of 5 stars
Almost anyone who ever appeared in a swampy southern movie is in this one.
Verified purchase
A decent plot, some good acting and some good location filming all added up to a much better than expected suspense movie with a little ghost story in there to help it out. Everyone speaks with a Cajun drawl so checking the Closed Captions was rather frequent. Nothing special or outstanding in this one but it was entertaining and it flowed along nicely.
13 people found this helpful
See all reviews
Back to top
Get to Know Us
Make Money with Us
Amazon Payment Products
Let Us Help You
EnglishChoose a language for shopping. United StatesChoose a country/region for shopping.
© 1996-2021, Amazon.com, Inc. or its affiliates