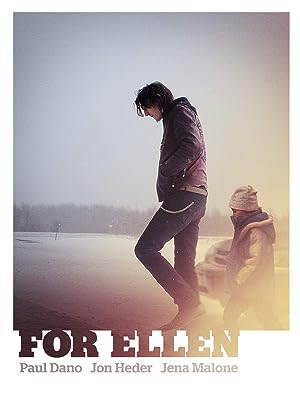 (39)1 h 33 min201216+
From Tribeca Film. A powerful performance from Paul Dano (Little Miss Sunshine, There Will Be Blood) as a burgeoning rock star wrestling with the prospect of losing custody of his young daughter. With Jon Heder (Napoleon Dynamite).

Christina ReynoldsReviewed in the United States on July 30, 2020
4.0 out of 5 starsDano's Performance Is Where This Film Shines
Verified purchase
Fair warning - I'm not sure how I feel about this film. Perhaps, by the time I'm done writing this, I will have decided.

Paul Dano stars in 'For Ellen' as Joby - a struggling musician that is dealing with an ongoing divorce and subsequent custody battle over their child in common named 'Ellen.'

I'll just get right to my biggest complaint- the pace of this movie and the relationship the characters have with one another was rather choppy. The interactions characters have throughout the film seem rather one-noted, and because of that, it's hard to feel as emotionally invested as the audience should be given the story contents. I have questions regarding why some scenes were made to be as long as they were (because, in the end, they didn't really feel important) in addition to questioning why some characters weren't given more time to develop or provide the audience with backstory that would have made the ending feel more appropriately "conclusive."

Secondly, I really don't mind being forced to make inferences about things that happen in a movie, but it happened far too often while watching this. Just as an example - the audience is told that Joby is in a position where he must surrender any rights he has to his child (as part of his impending divorce agreement) and we are not given ANY information regarding this decision being made in the first place. I might be thinking WAAAY in to it, but I was expecting to hear cited reasons (For example, allegations of abuse) for a parents rights being willingly terminated and all I got were implications that Joby is willingly absent and doesn't really care for having the responsibilities of being a father. There is a conversation towards the end where the audience receives some insight regarding Joby's struggle as a parent up to this point, but it just isn't enough to justify some of the 'holes' that were purposefully placed inside of this film.

To end on a good note, Dano's acting in this film wa spectacular; this is actually probably one of his best roles. Dano is all of the things a character in this position should be seen as - confused, disorganized, fearful, and sometimes a little bit awkward. His mannerisms and cadence appear natural, and they change depending on which character in the story he's associating with. Most notably, his characters' uncomfortable interactions with his daughter are spot-on and pull some unexpected sympathy out of an audience that can imagine being in his position.

Despite the movie having some flaws, Dano's performance redeems what would otherwise be an unfavorable experience.
It's not the best, but it's so far from being the worst. Just give the movie a chance, and see where it takes you.

Jacob B HenryReviewed in the United States on March 13, 2021
5.0 out of 5 starsBad until it's good
Verified purchase
A few times throughout the movie I almost shut it off because I really didn't want to see another asinine trope about the careless deadbeat dad who suddenly has an epiphany and deserves to be forgiven and have time with the child his sperm contributed to. He thinks he can, but he knows he can't. Which is an extremely difficult line to write and to act, and both pulled it off. There's really only two characters, and the actors playing both excel. I know a lot of people are going to dislike this movie because it doesn't have a great big climactic change of heart where the protagonist suddenly and magically becomes an amazing person because of the twinkle in a child's eye or some other absurd crap. The climax, the change in the protagonist, is his accepting that he's an a**hole and realizing he's not going to make anything better for anyone by sticking around.

It's rare a film is so brutally honest about such a subject matter, but this is written, filmed, and acted in a very compassionate, touching, understanding, and realistic way that it's fairly unpleasant to watch. The protagonist is unlikable throughout, but the film, the script, and the acting is done so well that you can hate him the entire time and still feel sympathy for him when he finally realizes it himself.

But mindless escapism sells right now, and this is not.
Report abuse

Highdesert420Reviewed in the United States on June 20, 2020
1.0 out of 5 starsNothing Good About It
Verified purchase
Very slow moving and boring. Main character has no redeeming value. Supporting cast was weak. Certain details of story not believable. Average camera work. No interesting scenery. Soundtrack sucked. This is just an all out bad movie.
2 people found this helpful
Report abuse

EasymonetReviewed in the United States on August 23, 2020
3.0 out of 5 starsEmotional
Verified purchase
I'm a fan of indie movies and a fan of Dano so I liked this a a lot, just not sure everyone else will - hence the 3 stars rather than 4.
Report abuse

GabeReviewed in the United States on February 28, 2021
4.0 out of 5 starsyes
Verified purchase
good movie. like i said, i'm tired of blockbuster crime dramas, shootem ups, and formula garbage. i like details now.
Report abuse

Amazon CustomerReviewed in the United States on October 20, 2020
3.0 out of 5 starspaul dano is always good.
Verified purchase
he plays his character convincingly. but this movie is kind of meh. not much to the story.
Report abuse

Kindle CustomerReviewed in the United States on May 8, 2021
5.0 out of 5 starsGood movie
Verified purchase
He did an amazing job as an actor
Report abuse

ChrisReviewed in the United States on December 19, 2012
3.0 out of 5 starsAccurate Portrayal of a Boring Situation
Verified purchase
This movie's trailer lead me to believe that I was going to an emotional roller coaster ride when in fact, it was more of a merry-go-round. Not to say this movie wasn't good, it was just slow moving and if not in the mood for a slow movie, could become very boring. The acting was great all around. The movie was good for what it was, but in the end I wouldn't of mind if I hadn't seen it.
One person found this helpful
Report abuse
See all reviews
Back to top
Get to Know Us
Make Money with Us
Amazon Payment Products
Let Us Help You
EnglishChoose a language for shopping. United StatesChoose a country/region for shopping.
© 1996-2021, Amazon.com, Inc. or its affiliates