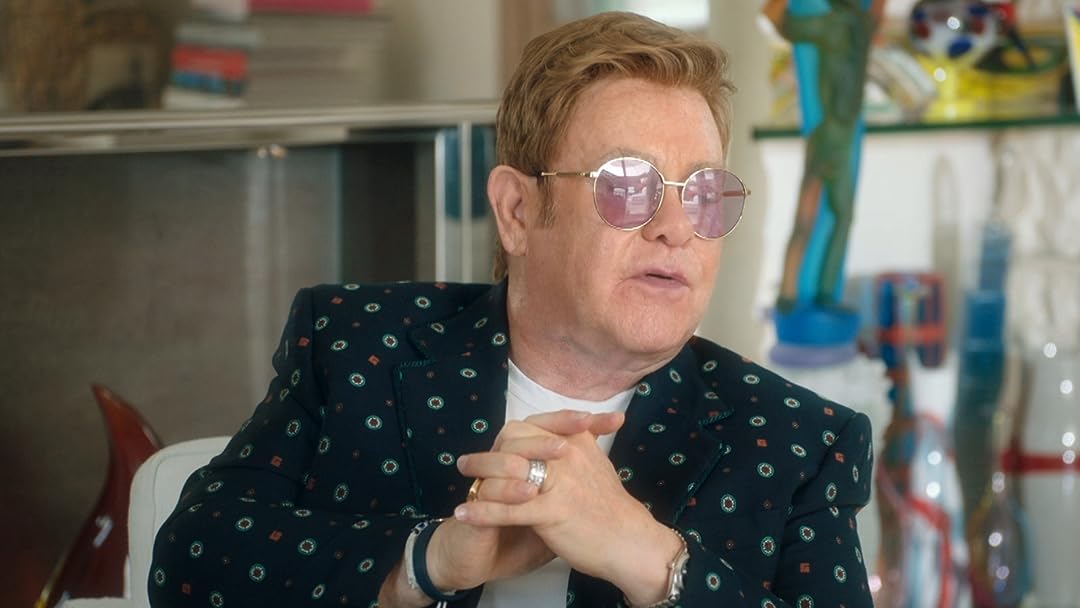 (70)
6.858min201916+
Sir Elton John talks to Graham Norton, looking back at his extraordinary life and career of over 50 years. Recorded in Elton's home in the South of France, this film revisits Elton's life: from early days to global superstardom. This special features many classic performances that have soundtracked the unique life of the Rocket Man himself - still standing and on top of his musical game.

DANNIReviewed in the United States on June 4, 2020
5.0 out of 5 stars
I liked it!
Verified purchase
I came here after watching Rocketman, that movie was sort of depressing with his family, and drugs...but a very honest movie, as was this sitdown. It was nice seeing Sir Elton John as a person. I laughed so hard in some parts, was sad in other parts, but things have worked out fine for him and that makes me happy.
11 people found this helpful

Kim McDonaldReviewed in the United States on June 6, 2020
5.0 out of 5 stars
Capt. Fantastic
Verified purchase
I have always been a diehard fan of Sir Elton. This interview is the best I've ever seen from him. No doubt in part because of Graham Norton, and the evident friendship between the two. You will find out things that you never knew about this great man and his life. I love you Reg, and so glad you're still standing.
12 people found this helpful

Jennifer &#34;Smiss&#34; HopsonReviewed in the United States on June 15, 2020
5.0 out of 5 stars
Lovely
Verified purchase
I love Sir Elton John and Graham Norton, so finding this was like finding a treasure. It is just great to see Elton talk so candidly about his life. Not just the ups, but also the downs.
10 people found this helpful

IntoMoYouKnowReviewed in the United States on December 23, 2020
2.0 out of 5 stars
Two queens promoting a bad movie
Verified purchase
This is not a documentary or interview, at all. It's a poorly disguised advertisement for that embarrassing Elton John biopic, based on his tell-all book. The only memorable thing in it is Elton talking about his evolution towards wearing wigs, but that probably happened because of their rise in popularity with women. He does choose a good wig, but that's the only part of this I enjoyed. Maybe you'll hear more about the details in the film, but as someone who loves Graham Norton's British show, this doesn't have a shred of pizzazz like that has. He marvels at the living room where the interview takes place, but Elton doesn't even have the graciousness to take him on a tour of the house or palazzo he lives in.

Only watch this if you loved that terrible movie.

White WolfReviewed in the United States on August 29, 2020
5.0 out of 5 stars
Absolutely Outstanding Sir Elton!!
Verified purchase
I never realized how much I really loved Elton (Hercules) John's music until last year. I went to see a stunner of a cover band for him and I came home hoarse from singing all of the songs at the top of my lungs! I remember Elton in the 80's very well because a family member was a huge fan and they played his music a lot. Looking back on that now I feel like I saw Elton mature, even though I was so young. I saw him begin to marinate in who he was maybe that's when he learned what true love was with his husband. He changed and I listened a bit closer, I took him more seriously because he took himself more seriously. To see him in this interview? I am SO glad to see him make it this long and be so adored as he should. He is an outstanding performer and this interview was just so beautiful to be able to see. Rock on Rocketman!!! oxox
2 people found this helpful

ReginaReviewed in the United States on July 22, 2020
4.0 out of 5 stars
A brief synopsis of his autobiography
Verified purchase
I watched this to see if it compares to his autobiography I'm listening to now and it is but there is a lot I read about that isn't on this video. So, if you like this video then you will love his autobiography.
One person found this helpful

Pixel 8Reviewed in the United States on September 12, 2020
5.0 out of 5 stars
Both still standing
Verified purchase
How great to see such amazing honesty and authenticity in an interview format, from both the great Graham Norton and the great Elton John. I found it truly heartwarming, especially in our era of braggadocio (especially in America) to listen to Elton talking about coming to terms with himself, not only his talent but his problems and getting help when he needed it, in a transparent, disarming, even humble way. Graham Norton asked such wonderful questions, at the end I wished there was more.
3 people found this helpful

Dr. Richard TrammelReviewed in the United States on August 3, 2020
5.0 out of 5 stars
I Never Knew EJ Had Such a Great Sense of Humor.
Verified purchase
Thoroughly enjoyed. I have listened to EJ music my entire life (grew up on it). I really never knew much about him (as a person) and this interview is a further indicator of his interesting journey. Apparently he has faced some of his demons and had the courage to share them with strangers. I would recommend this piece to anyone.
2 people found this helpful
See all reviews
Back to top
Get to Know Us
Make Money with Us
Amazon Payment Products
Let Us Help You
EnglishChoose a language for shopping. United StatesChoose a country/region for shopping.
© 1996-2021, Amazon.com, Inc. or its affiliates