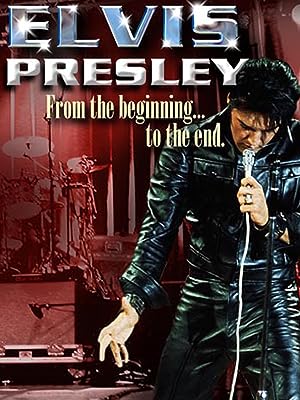 Elvis Presley: From the Beginning to the End

(190)7.51 h 2 min2004ALL
A warm, moving and sensitive tribute and a comprehensive and detailed biography of Elvis' life. Utilizing rare footage and photos from the 42 years of his life, the film follows the Presley story from his birth in Tupelo through his rise to superstardom to his tragic and untimely death. Featured are interviews with musicians and music historians.

Karen J. Reviewed in the United States on April 11, 2021
1.0 out of 5 starsJust a singer
Verified purchase
When the narrator says "what might have been" when Elvis died at 42, I wasn't impressed. Now, if you say "what might have been" after Buddy HOLLY died, THAT would be amazing. Elvis was just a singer. Singers are a dime a dozen. Elvis allowed Colonel Parker to manipulate him into the dumbest movies. Yes they may have made a bundle but so does rap music. Popularity doesn't necessarily reflect good taste. Elvis was the cause of his own demise; Buddy Holly was not. Buddy Holly actually WROTE his songs and recorded them. Holly was actually an influence on ELVIS. Let's see. How many songs written by Elvis have been recorded by other artists? Hmm. Elvis never wrote ONE song, although he is given 50% credit because his record label demanded that of songwriters before Elvis would record it. Sounds pretty deceptive to me. I remember when I first bought the 45 "Not Fade Away" by the Rolling Stones, I assumed it was their song. Nope. It was written by Buddy Holly. As far as I'm concerned, Buddy Holly was more of an influence than Elvis, a mere vocalist, albeit a good one. When this piece started talking about Elvis's "comeback", I thought it was terrible. Those ridiculous outfits, playing Vegas to me was a death knell. I appreciated him much more in the early days. In fact, Elvis may have made more money but as far as talent, Buddy Holly, in my opinion, dwarfs Elvis Presley. Remember, he died at a very young age(22). Elvis was "marketed"; Buddy Holly was genuine.
One person found this helpful
Report abuse

mrwReviewed in the United States on June 20, 2018
3.0 out of 5 starsGood synopsis of Elvis with canned presentation.
Verified purchase
As the title suggest it is a history of Elivs.

The story has a consistent flow that seamlessly progresses through his life.

The narrator sounds canned. That is the voice and structure are unoriginal. YOu could substitute any historical figure. As such that aspect was a little boring.

If you are an Elvis fan you will probably not find anything that you didn't already know. If not it is a good synopsis of his life.

CarolReviewed in the United States on March 4, 2018
2.0 out of 5 starsDisappointing
Verified purchase
I've seen far better films about Elvis. This was just kind of a narrated biography that kind of skimmed the surface but never got deep enough to be interesting. I found myself not really caring what the narrator had to say because I knew it would be just more basic facts and no depth. I also believe that some of the information was incorrect--such as the assertion that Elvis never had sexual contact with Priscilla until after they were married.
Report abuse

tx14acresReviewed in the United States on October 17, 2016
5.0 out of 5 starsA great biographic look at The King!
Verified purchase
As an Elvis fan, there were still things I didn't know about him. This movie gave me more insight into his life and the type of person he was. So much talent. It's sad he passed away the way he did.
6 people found this helpful
Report abuse

NanaReviewed in the United States on November 16, 2016
5.0 out of 5 starsThe King of Rock and Roll
Verified purchase
Great story about the life of Elvis Presley. How he became famous and the King of Rock and Roll and how drugs destroyed his life. He will never be forgotten.
5 people found this helpful
Report abuse

penpalReviewed in the United States on July 10, 2016
2.0 out of 5 starsDisappointed
Verified purchase
This could have been such a great movie about Elvis. Broadcasting his music, listening to his voice and showcasing original movie footage. Instead we got a stale moderators voice, with elevator music in the background. This was very disappointing. Glad I didn't pay for it,
4 people found this helpful
Report abuse

Hoosier ReaderReviewed in the United States on January 23, 2017
3.0 out of 5 starsInteresting but lacks Elvis singing
Verified purchase
Disappointed in the missing music of Elvis. Many photos of his life and factual narration were great but only a couple spots where Elvis is actually
singing.
3 people found this helpful
Report abuse

Kelly K.Reviewed in the United States on September 11, 2016
1.0 out of 5 starsDon't waste your time on this garbage.
Verified purchase
Why? Why make this compilation of still photographs with NO Elvis music? Very few video clips? And the two "announcers" should never be on camera for any reason. This should be a lesson to filmmakers everywhere: yes, you can make a terrible film even if you have a great topic. Don't waste your time on this garbage.
3 people found this helpful
Report abuse
See all reviews
Back to top
Get to Know Us
Make Money with Us
Amazon Payment Products
Let Us Help You
EnglishChoose a language for shopping. United StatesChoose a country/region for shopping.
© 1996-2021, Amazon.com, Inc. or its affiliates