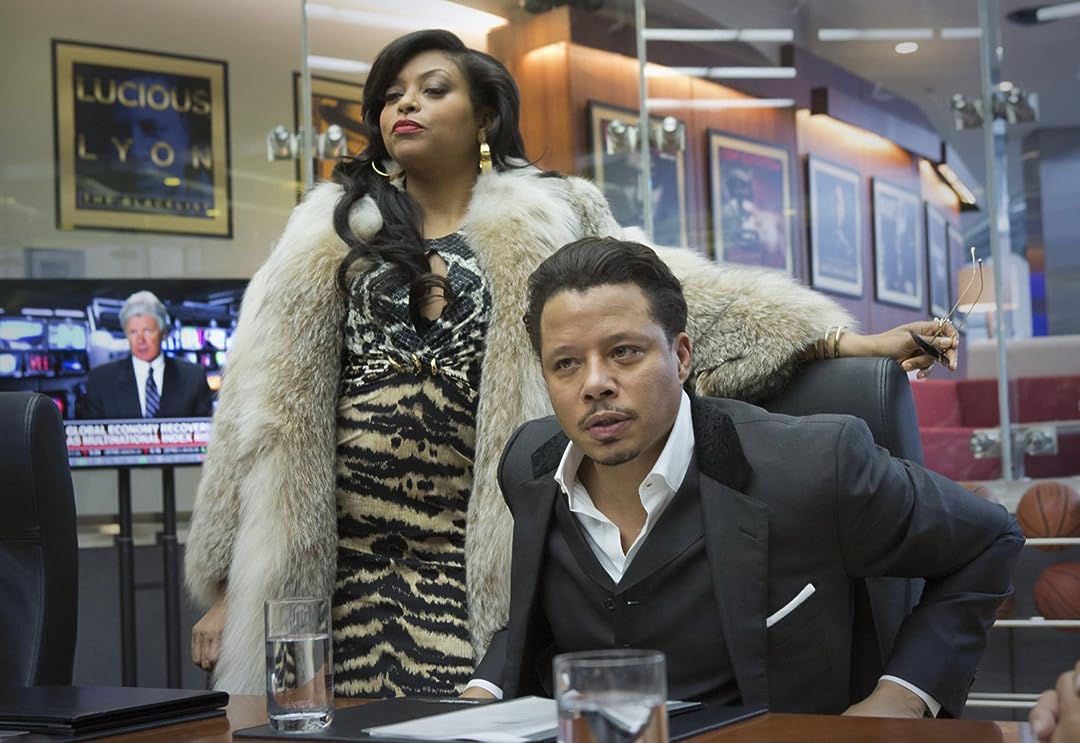 (2,327)
7.42015X-RayTV-14
A sexy and powerful new drama about a family dynasty that follows the head of a music empire whose three sons and ex-wife all battle for his throne. EMPIRE airs Wednesdays at 9/8c on FOX.

P. AndersenReviewed in the United States on January 7, 2015
5.0 out of 5 stars
EMPIRE.
Verified purchase
Love the TWO T'S TOGETHER !!, Taraji & Terrance !!, This is a hit in my book!!, can't wait till tonight.
The story of Lucious and Cookie Lyons, from their early day's together struggling to make it. He as a brilliant musical talent, His wife as the street wise entrepreneur. Cookie gets sent to prison for 17 years for selling drugs, her husband is free to use the $400,000.00 (four hundred thousand)
to build a musical " EMPIRE".

Great casting all around. KUDOS to FOX !!, opulence abounds !, fabulous and fierce wardrobes, and MUSIC!.
I have personally been so over the musical talent show's on fox, glad to see them take a chance and flip the script. THIS IS SO FRESH.
I hope everyone will tune in and give this show a chance. * UPDATE* Empire has been renewed for a second season!. It's the first show on FOX since 1993 to increase it's ratings AND VIEWERS 2 weeks AFTER it's premier date.
IF my review has helped, click YES below, Thank you.

AjileReviewed in the United States on April 20, 2015
5.0 out of 5 stars
Modern, Creative, Superb, Gripping TV Series!
Verified purchase
I had to look at some episodes twice - since so much was going in in these action packed, fast moving episodes!
The music is spectacular - This is a great piece of TV writing and the actors make this show come alive! As the filmed interviews state (check out the 2 FREE preview discussions on Amazon about how this series came into being with the key actors, producers & writers on the show): This series is: combination of the Godfather; King Lear; with a heavy dose of hard hitting, contemporary black music AND an inside peak into the family dynamics of those celebrities dealing with the business side of the high grossing music business! Check out the character performances: a Mom who was incarcerated for 17 years & used her illegal drug $$$ to set up the family music business (Cookie); the Godfather head of the now profitable Empire with lots of music talent who wants one of his sons to take over the business when he dies (Dad); a young rapper son with lots raw street talent; a 2nd son with the smooth John Legend sound who is a "out of the closet" self-assured gay man; a 3rd son with MBA business acumen who struggles to control his bi-polar mental health issues -- PLUS the tension created by the BIG Q - Which one will be selected to get control of the Empire that Mom & Dad built ? The writers packed all of these contemporary societal issues we struggle with today with an insiders look at the high $$ celebrity lifestyle of a family in the music business ! A creative, superb & gripping series!
5 people found this helpful

Cyrus WebbReviewed in the United States on April 23, 2017
5.0 out of 5 stars
A show that reminds us that no matter what we are joined together in this human experience, Empire is must-see tv
Verified purchase
This show had me from the very first episode when we see recording artist V. Bozeman singing WHAT IS LOVE. The Lyon family is everything we love about great television: drama, intrigue and characters that leap off the screen and into our lives.

The way the first season developed made us not just want to know them better but allowed us to see that regardless of how much money, power and influence they had it didn't make them immune from the problems we all face in life. That is what EMPIRE really reminded me of: these people are us and that is what makes it must-watch television.

If they can weather the storms that they face in each and every episode then all of us have a chance to make tomorrow better.
5 people found this helpful

A.S.Reviewed in the United States on April 14, 2017
5.0 out of 5 stars
Bold and entertaining
Verified purchase
Good show about a media mogul and his family and all the the drama surrounding them and their musical empire. Bold, entertaining, and lots of juicy drama, plus a lot of the musical performances are great. This isn't a musical for those that don't like that type of show, they don't just randomly break out into song. The only time there's singing is when they're actually performing onstage or in the studio. I appreciate the diversity Empire brings to TV and Taraji P. Henson steals the show with her performance.
4 people found this helpful

YOU WILL LOVE THIS SELLERReviewed in the United States on February 14, 2015
5.0 out of 5 stars
HAVEN'T SEEN EPISODE I AND I'M A BELIEVER OF GOOD ACTING!!!!! FOX YOU BETTER KEEP THIS UP!!! SINCE 1993!!! NOT SURPRISED!!!!!!!
Verified purchase
I'm so behind and late. Caught Tarija on The Talk on Wednesday and heard from her about the show.......it was Wednesday..Dang, I am so busy, I still forgot to watch the show. So I decide to check Amazon to see if the show was available. I'm just check out the Previews and Introduction with the Writers, Producers, and I'm hooked. I already love Terrance and Taraji because they are excellent actors/actresses so this didn't take much of a task to realize this is a great show. My God...I can't wait for Wednesday. I never was a Scandal fan although I've seen a few episodes. I love the Good Wife because shows with Attorney's always keeps me on the edge of my seat, yet this show is now my favorite and I haven't even seen Episode I. Thank you FOX (CAN'T BELIEVE IT'S ON FOX) YEAHHHHHHHHHHHHHHHH FOR FOX..YOU GUYS HAD A BAD RAP FOR AFRICAN AMERICAN SHOWS AND NEWS...YET THE REVIEWS SINCE 1993!!! YOU BETTER EMBRACE THIS SHOW FOX AND KEEP IT ALIVE!!!!
One person found this helpful

GG13Reviewed in the United States on September 8, 2015
5.0 out of 5 stars
Great Story and Terrific Music Too!
Verified purchase
I started hearing a lot of positive things about Empire, so decided I should watch the first season before Season 2 began. Boy, am I glad I did! I found it quite addictive. I watched the entire season over two days. The story is about a powerful family in the recording industry, and they are bound together by their past as well as the present. The show wouldn't work without strong actors in key roles, but it has them. And I am surprised by how much I like a lot of the music as well, even though I'm not always a fan of modern R&B or rap. But I have to admit that much of the music is really enjoyable and cerrtainly adds to the likeability of the show. I am looking forward to Season 2!
2 people found this helpful

Tulsi17Reviewed in the United States on March 10, 2015
5.0 out of 5 stars
This is NOT your mama's Dynasty!!!
Verified purchase
When I heard this compared to "Dynasty", I thought - no thanks because I wasn't a big fan. Yeah, well, let;s just say that was a weak comparison. I decided to try this anyway, and I am HOOKED! The character development is really good. I actually came to care for each of these characters (although Lucious - oy! That's a hard one.). Anyway, two episodes ago I had tears streaming down my face when the oldest son was losing it in the shower. His wife even gained another dimension to her character in that scene. Well done! Although I'm not a hip hop fan, the actor that plays Hakeem is very talented, and that makes his musical scenes fun to watch. The character of Jamal has a beautiful voice and his musical style is more to my taste. And, man, I need a COOKIE t-shirt. I just love her. She rocks! I'm even starting to feel a little more than contempt for "Boo boo Kitty". :-). I'm looking forward to Season 2!

RiverGirlReviewed in the United States on August 29, 2015
5.0 out of 5 stars
Empire Exceeds All Expectations
Verified purchase
This show rocks on multiple counts: First, the family drama rings true --rivalry between brothers, sons seeking their father's respect, conflict as part of intimacy between partners (I don't mean violence, I mean challenging each other with uncomfortable truths), rivalries between sweethearts, and transcendent moments when family members "get" each other's truths. This drama is the stuff of real life. The writers have created characters, dialogue and dramatic arcs that are just like people-- full of contradictions. Second, the actors are amazing. They inhabit their characters, they understand what drives them, and they take risks, letting us see their beauty and pain and love and courage and talent, so we believe them. The chemistry between them is powerful. Third, the music isn't just seamlessly woven into the story, it advances the story, moves the drama forward. Unlike the dorky musicals of yesteryear, where every time actors burst into song the story stalled, here the music is a living, breathing part of the story. And it's phenomenally good, original music, thanks to producer Timbaland, the amazing performances by "Jamal" and "Hakeem," and the A list of Hip Hop stars who do cameo performances. This white girl wants to buy the album that comes out of this show! And finally, this show pulls out all the stops by shattering stereotypes in every episode -- gender, sexual orientation, and race get treated as whole and complex identities. Characters behave in fresh ways that disrupt stereotypes about black women, black fathers, gay men, older women, black professionals, plus-size women, and black musicians. This is so damn rare in prime time television, and much appreciated!
2 people found this helpful
See all reviews
Back to top
Get to Know Us
Make Money with Us
Amazon Payment Products
Let Us Help You
EnglishChoose a language for shopping. United StatesChoose a country/region for shopping.
© 1996-2021, Amazon.com, Inc. or its affiliates