The Empty Stage: A Memoir and millions of other books are available for Amazon Kindle. Learn more
Share <Embed> 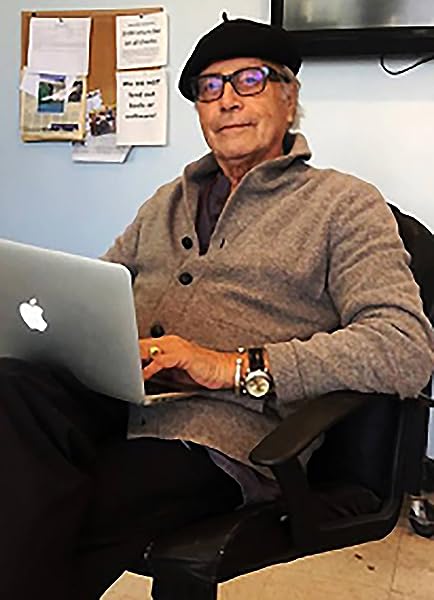 by Alan Roderick-Jones (Author), TBD (Author)
4.6 out of 5 stars 14 ratings
See all formats and editions
Sorry, there was a problem loading this page. Try again.

Alan Roderick-Jones is one of those rare entertainment industry hyphenates whose illustrious career has never been told before. A London and Hollywood production designer, art director, artist, director and producer Alan’s career spans over five decades.

His contributions include such film classics as The Lion in Winter, Nicholas and Alexandra and Papillon. One of the unsung heroes of the design team for the original Star Wars classic (A New Hope), Alan’s professional intersections include film industry icons such as Peter O’Toole, Richard Burton, Richard Harris, Katherine Hepburn, Sophia Loren, Marlon Brando and producer Sam Spiegel…as well as the legendary Charles Chaplin.

More than just a fascinating professional saga, Alan’s memoir, The Empty Stage is also a warm personal story and a spiritual journey filled with humor, warmth, humanity and visionary perspectives of a world as it can be. Already a hit with “the inner circle” The Empty Stage is a book that will delight (but not surprise) all those who know Alan well.

Alan, I love your book! I remember you saying you were starting to write it. And by Jove you have. Inspired and impressed! -- Pierce Brosnan

In his book The Empty Stage my friend and colleague Alan Roderick-Jones has taken me on a magical mystery tour from one chapter to the next. I see my own life in reflection while reading his compelling personal account. What a story! -- John Slowsky, Art Director, Universal Studios

The Empty Stage sings! The lines of a life, beyond-well-lived, are drawn across its canvassed pages by Alan Roderick-Jones' draughtsman's eye and poet's soul--a rendering as rich and poignant in simplicity as it is in directness of heart. --Michael Fitzpatrick / Musician / Recipient of The Prince Charles Award for Musical Excellence

In his book The Empty Stage my friend and colleague Alan Roderick-Jones has taken me on a magical mystery tour from one chapter to the next. I see my own life in reflection while reading his compelling personal account. What a story! -- John Slowsky, Art Director, Universal Studios

My brilliant, insightful, compassionate gem of a man and friend...Extraordinary is this work and your recounting...what a complex of history, story telling and wisdom you share with your readers! -- Mark Laisure, CEO - Vortex Immersion Media

Start reading The Empty Stage: A Memoir on your Kindle in under a minute.

Alan Roderick-Jones is an artist, painter, art director, production designer, screenwriter and director who has worked in film and television since 1961 and has lived in Malibu, California with his wife Rachel for the last 41 years. As he has so successfully done in the past, Alan is joyfully redesigning the rest of his golden years.

4.6 out of 5 stars
4.6 out of 5
14 global ratings
How are ratings calculated?
To calculate the overall star rating and percentage breakdown by star, we don’t use a simple average. Instead, our system considers things like how recent a review is and if the reviewer bought the item on Amazon. It also analyzes reviews to verify trustworthiness.
Top reviews

Grady HarpTop Contributor: Children's Books
HALL OF FAMETOP 100 REVIEWER
5.0 out of 5 stars ‘Avanti! (Forward)...and that is where we’ll go’
Reviewed in the United States on March 6, 2020
Verified Purchase
California author Alan Roderick-Jones is a titan of the film and television industries. His skills span the range of artist, painter, art director, production designer to screenwriter and director – in essence, every aspect of creativity that makes his career so luminous. Now at age 79 he shares his memoir of a life that has impacted us all – through visual entertainment, and now through philosophical meanderings.

Alan has garnered many awards, including Academy Awards, Cleo Awards, Silver Lion at Cannes, for this work as a production designer/artist, some of his most well-known contributions include Star Wars, Nicholas and Alexandra, Tarzan the Ape Man, The Incredible Hulk, Marilyn Monroe: Life After Death, The Lion in Winter, Young Winston, The Last Safari, Blow-up and on and on. He is also highly respected for his architectural designs, and his fine art and photography.

Now Alan turns his sensitive spirit to writing his memoir, and the experience of reading this volume is both illuminating and inspiring. Setting the mood for his notes on a life well lived, he opens with the following – ‘It was as if it never happened and yet it did. There I was consciously looking at the Earth from some point far away in the cosmos. I felt a presence of Light to my left side, I then heard the words spoken to me from a deeply resonant voice: “Remember that you chose to come this time in order to experience the magnificence and perfection of Creation, knowing that: that which creates life, you are and that which is life, you are…You are one.” That small moment indicates the resonance of reading this splendid memoir.

From his birth in London, through his formative childhood years, accompanied by photographs that enhance the credibility of the biography, Alan begins his series of reflections on the events and the people who influenced him – and whom he influenced! Inserting images of films, such as East Of Eden, that provided the fodder on which he would grow into cinema, brings us visually as well as verbally into Alan’s world.

Reading THE EMPTY STAGE is not only an invitation into the world of Alan Roderick-Jones: it is also a passage into our own histories, as events, personages, trends, traits, and of course cinematic and artistic moments that Alan shares from his life’s progress make the past visual. As he states nears the closure of his memoir, ‘Ultimately, if I’ve learned anything it is this: Life is an Empty Stage – dark for a few hours waiting for yet another play or a new group of players…and a reminder that what comes next is also only a passage.’ This is a book that is edifying, entertaining, and inspiring. Highly recommended. Grady Harp, March 20
Read more
2 people found this helpful
Helpful
Report abuse

Stainless Steel
5.0 out of 5 stars A Truly Fascinating Read
Reviewed in the United States on March 23, 2020
Verified Purchase
The Empty Stage : A Memoir by Alan Roderick-Jones tells the memories of this very inspiring life. I’ll be honest I have heard of some of the films he has been involved in but I haven’t ever heard of the author himself. This however didn’t take away from the memories as it was very interesting.

Whether you know who Alan Roderick-Jones is orto not, any movie lover will find this book an interesting read. The reader begins the journey meeting Alan as a youngster, describing family life that wasn’t always easy. We learn a lot about this mans life that has certainly been an interesting, exciting and fulfilling one. Alan makes the reader realise everything is possible through hard work and creativity.

Alongside the interesting information about well known movies and actors I also really enjoyed the pictures included, it made the read even more pleasant.

I truly recommend this memoir even if you are like myself and not sure who the author was, the movies and actors he spoke about was truly fascinating.
Read more
Helpful
Report abuse

Michelle Williams
4.0 out of 5 stars Riveting and awesome
Reviewed in the United States on March 14, 2020
Verified Purchase
A very riveting re-telling of behind-the-scenes operations of popular and iconic movies and advertisements. You get glimpses of the greats -Sophia Loren, Charlie Chaplin and contemporaries Pierce Brosnan and The Beatles. Alan shares his jet-setting life and the connections he makes in the movie business. His strong work ethics and spunk makes him the go-to guy in the industry.
In the vein of a memoir there are points where he is contemplative but acknowledges the higher power in shaping and leading his life. He expresses his appreciation and humility for being included in the inner circles of the world celebrities while admitting awe for being singled out by them.
I liked “The Empty Stage” for the glimpses it gave me of icons and to see the reality of a simple person making strides among them.
Read more
Helpful
Report abuse

Priyanka Athavale
5.0 out of 5 stars What an interesting personality!
Reviewed in the United States on March 14, 2020
Verified Purchase
The Empty Stage: A Memoir talks is an autobiography of Alan Roderick-Jones, one of the stalwarts of the entertainment industry who is not as well-known today, but has made some more than significant contributions to the industry through the course of his monumental career. Jones has been a popular face in Hollywood and worked as a production designer, art director, artist, director and producer, contributing some major culture-defining movies such as the original Star Wars. This book manages to capture the great works of this amazing personality, and the best part of it was that it has come directly from him. The book is a very interesting read; it is fascinating to know about how the entertainment industry worked back in the day without so much technology as is available today. A really fun read!
Read more
Helpful
Report abuse

Phil Bolos
5.0 out of 5 stars A Fascinating Life
Reviewed in the United States on March 14, 2020
Verified Purchase
The Empty Stage: A Memoir by Alan Roderick-Jones is a memoir that takes us through the life and times of Alan. The read begins when Alan was young and focuses on his family and the things that took place that would eventually lead him to become to influential Hollywood man that we know him to be today. Later, we learn about his experiences in Hollywood working on movies that are household names today alongside actors and actresses who have lived in the spotlight for decades. The read is both informative and inspiring as Alan shows us everything that can accomplished through hard work and creativity.
This is a must read for anyone who has an interest in movies and Hollywood. Alan Roderick-Jones is not a name that will stand out to many of us, but when the names of the movies he has worked on begin to get listed, it will be quite clear that he is someone worth paying attention to. In addition to his accomplishments in Hollywood, the memoir also showcases Alan's accomplishments as a photographer and a designer. The photos on the pages do a great job of helping bring to life everything that he has done in his years. Thank you to Alan for everything that you have done, and thank you for writing this. It will surely inspire future directors, photographers, actors and designers.
Read more
Helpful
Report abuse
See all reviews
Back to top
Get to Know Us
Make Money with Us
Amazon Payment Products
Let Us Help You
EnglishChoose a language for shopping. United StatesChoose a country/region for shopping.
© 1996-2022, Amazon.com, Inc. or its affiliates