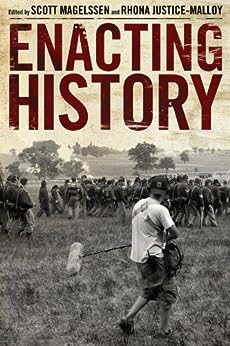 by Scott Magelssen (Editor), Rhona Justice-Malloy (Editor), Leigh Clemons (Contributor), Catherine H. Hughes (Contributor), Kimberly Tony Korol-Evans (Contributor), Lindsay Adamson Livingston (Contributor), Ailithir McGill (Contributor), Richard L. Poole (Contributor), Amy M. Tyson (Contributor), Patricia Ybarra (Contributor) & 7 more Format: Kindle Edition
See all formats and editions
Sorry, there was a problem loading this page. Try again.
Enacting History is a collection of new essays exploring the world of historical performances. The volume focuses on performances outside the traditional sphere of theatre, among them living history museums, battle reenactments, pageants, renaissance festivals, and adventure-tourism destinations. This volume argues that the recent surge in such performances have raised significant questions about the need for, interest in, and value of such nontraditional theater. Many of these performances claim a greater or lesser degree of historical "accuracy" or "authenticity," and the authors tease out the representational and historiographic issues related to these arguments. How, for instance, are issues of race, ethnicity, and gender dealt with at museums that purport to be accurate windows into the past? How are politics and labor issues handled in local- or state-funded institutions that rely on volunteer performers? How do tourists' expectations shape the choices made by would-be purveyors of the past? Where do matters of taste or censorship enter in when reconciling the archival evidence with a family-friendly mission?

Essays in the collection address, among other subjects, reenactments of period cookery and cuisine at a Maryland renaissance festival; the roles of women as represented at Minnesota's premiere living history museum, Historic Fort Snelling; and the Lewis and Clark bicentennial play as cultural commemoration.

The editors argue that historical performances like these-regardless of their truth-telling claims-are an important means to communicate, document, and even shape history, and allow for a level of participation and accessibility that is unique to performance. Enacting History is an entertaining and informative account of the public's fascination with acting out and watching history and of the diverse methods of fulfilling this need.
Read more
Previous page
Next page

Normal0falsefalsefalseMicrosoftInternetExplorer4
Scott Magelssen is an associate professor of theatre at Bowling Green State University, author of Living History Museums: Undoing History through Performance, and editor of the Journal of Dramatic Theory and Criticism.
Rhona Justice-Malloy is a professor of theatre at the University of Mississippi, editor of Theatre History Studies, and past president of the Mid-American Theatre Conference.
--This text refers to the paperback edition.

“The authors and their fellow contributors should be congratulated for producing a book that is theoretically sophisticated and accessible to a wide range of readers and—owing to its innovative topic—a good deal of fun to read.”—Jason Shaffer, author of Performing Patriotism: National Identity in the Colonial and Revolutionary American Theater
--This text refers to the paperback edition.

3.7 out of 5 stars
3.7 out of 5
2 global ratings
How are ratings calculated?
To calculate the overall star rating and percentage breakdown by star, we don’t use a simple average. Instead, our system considers things like how recent a review is and if the reviewer bought the item on Amazon. It also analyzes reviews to verify trustworthiness.
Top reviews

Roger D. Launius
3.0 out of 5 stars A Start in the Analysis of Presenting History through Performance
Reviewed in the United States on January 5, 2015
he challenge of presenting the past has long been a topic of discussion among museum professionals, historians both academic and other, as well as a broad cross-section of those interested in heritage and the heritage industry. One of the means in which they do seek to present this past is through historical reenactments of all types. Sometimes these are formalized processes of costumed interpreters at such historical sites as Colonial Williamsburg and Fort Snelling. Sometimes these are recreations of events such as the highly effective Greensboro Lunch Counter program at the National Museum of American History. Sometimes these are completely grassroots activities such as the many battle reenactments of Civil War aficionados.

Regardless of the manner in which these are developed, nurtured, and practiced, the question of authenticity is central to its unfolding. In the case of many such activities the authenticity is mostly about the costumes and perhaps the accoutrements of the activity. In the case of Colonial Williamsburg that authenticity reflects not only those concerns but also the personification of individuals and their backgrounds.

This collection of essays seeks to get to the question of authenticity in a variety of settings from historic sites to pageants to reenactments. In each case the objectives and the approaches are somewhat different. This is an uneven collection of case studies written, it seems without much in the way of editorial direction by the various essayists. It could have been an important set of cases had the editors imposed some rigor on the essayists and sought to extract some broader ideas that could inform the field. As it is, the essays may be read on their own merits but as a work the whole is less than the sum of its parts.

Accordingly, if it is not already understood, I must to admit to a bit of disappointment with this book. I had expected that Enacting History would be a set of related analyses of the manner in which historic sites, Civil War reenactors, etc., approached their efforts to depict the past. Some of that is present, but there is no broader overview that helps to unpack the reenactment of the past. Some of the essays are little more than “this is what we did in costume” accounts and some fail to make any point beyond the specific. Some of them are participant-observer ethnographic discussions; others are more about how to stage an historical play than anything else. One was even about the Maryland Renaissance Festival; an interesting event but also something so far removed from any real effort to depict the past that even its participants—be they dressed as Henry VIII or a Hobbit or a character from Star Wars (I have seen all of these at the RenFest)—view it as little more than an opportunity to dress in costume without believing that it has anything to do with history.

The varieties of historical reenactment still awaits its analysis. I would like to see a work like Henry Jenkins's Textual Poachers on Civil War reenactments of the renaissance festivals. Perhaps there is such a book, if so please let me know about it. Tony Horwitz comes as close as I know this type of study in Confederates in the Attic but it is still not quite at the level of analysis offered by Jenkins. The place of reenactment in historic sites is a topic screaming for serious attention.
Read more
One person found this helpful
Helpful
Report abuse
See all reviews
Back to top
Get to Know Us
Make Money with Us
Amazon Payment Products
Let Us Help You
EnglishChoose a language for shopping. United StatesChoose a country/region for shopping.
© 1996-2021, Amazon.com, Inc. or its affiliates