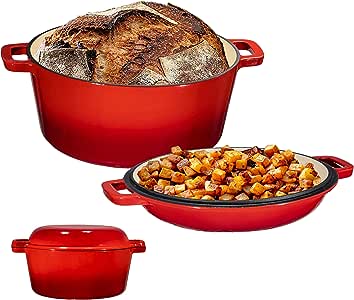 If you love to cook but hate cleaning up multiple pots and pans, this is the product for you. The lid conveniently transforms to a skillet.

4.6 out of 5 stars
4.6 out of 5
1,317 global ratings
How are ratings calculated?
To calculate the overall star rating and percentage breakdown by star, we don’t use a simple average. Instead, our system considers things like how recent a review is and if the reviewer bought the item on Amazon. It also analyzes reviews to verify trustworthiness.

dink
5.0 out of 5 stars UPDATED
Reviewed in the United States on August 6, 2019
Color: RedVerified Purchase
mainly purchased this to bake bread. seems a little odd there is a strip of exposed cast iron between the enamelled interior and enamelled exterior? nice weight, heats evenly. I will come back and update this review in a month - six weeks and let you know how I like it after more use
*** UPDATE*** I have been cooking in the skillet/lid two- three times a day since I received it. Why more people aren’t upgrading their cast iron to enamelled I can not understand for the life of me? I cooked everything on med or lower, it heats very consistently in my electric stovetop. I just brush a little olive oil onto the ceramic surfice and when I go to wash it once it has cooled enough to handle without potholders I use a tiny bit of dish soap on a sponge, sure if something has dried on you have to rub a little harder, but I find letting it sit with the soap rubbed in for five minutes everything rinses right off. Definitely glad I purchased this set, only thing that would improve this line is if they offered lids that fit each piece that one could opt to purchase

Paul Barkley
5.0 out of 5 stars Awesome piece!
Reviewed in the United States on June 11, 2019
Color: RedVerified Purchase
I bought this solely to bake bread, specifically sourdough. I didn't want to spend over $100 on a cloche, and after some thought I decided I didn't want just cast iron, either. I grew up with cast iron frying pans, and while I know how to season them and care for them, not screwing them up doesn't seem to spark any joy. The only things that can happen to cast iron are bad. So I thought I'd try this enamel coated product.

Amazon threw it in a box with no padding, so just the manufacturer's packing was enough to protect it, although I wish they hadn't done that. It arrived fine, looks great, and is really heavy because of course it's cast iron under the nice coating. The manufacturer's instructions say don't worry if the enamel chips because the cast iron is fine to cook with, but when or if that happens, I don't be happy. I plan to take care of this.

Because I wanted to use it as a cloche, I used it upside down. I put the dough on the inside of the pre-heated lid and covered it with the pre-heated pot! Worked great. Of course at 500 degrees, you want to be careful handling this heavy stuff.

I also found that it took a long time to cool down, obviously another trait of cast iron. That made it a bit of a liability in the kitchen when others were actively cooking, so think about where you're going to put it when you're done and it's still hot. I suppose it could be put back in the oven for cool down, but that would really take a while! I left it on an unused gas burner for a while, and then transferred it to a table on pot holders later. Something to think about.

Although I only baked in it and it got a minimal amount of crud on it, it cleaned up easily, exactly what I wanted.

My wife has her eye on it but I've spirited it away with the stuff I sequester for baking. It would make a great, well, Dutch oven!

A really nice looking piece for the kitchen, highly recommended!

Amazon Customer
5.0 out of 5 stars I bought another a week later as a gift for my friend with the porclain Dutch oven.
Reviewed in the United States on March 30, 2018
Color: Black Pre-SeasonedVerified Purchase
A friend loaned me his Porclain over iron Dutch oven. It was pretty but chipped, handling a pot that heavy is bound to get bumped around. I decided then to buy a cast iron oven. After reading some reviews and comparing prices I bought the Bruntmor oven. I seasoned it once with avocado oil which I understand has the highest of smoke point. My first try at baking bread at 450 degrees was perfect. The bread was baked evenly with no noticeable hot spots. The best was the bread was loose in the oven, no coaxing or digging to retrieve.
The lid makes a perfect pan for sautéing and searing. If I could make one suggestion it would be to somehow make it easier to distinguish between the handles of the lid from the pot. When reaching into the hot oven I’m careful not to grab one handle of the lid and one of the pot. At 450* you don’t want an accident.
Read more
153 people found this helpful
Helpful
Comment Report abuse

PHXVOM
5.0 out of 5 stars Honestly! I doubt if I could have a made a better buy
Reviewed in the United States on May 9, 2018
Color: Black Pre-SeasonedVerified Purchase
I've spent a long time looking at different Dutch Ovens. I'm glad that I took the time to select this. I was very impressed with the quality of this Dutch Oven, the price is incredible. We have our first gas oven and cook-top. I've always had electric or a glass top range. I love the gas, and making a roast is easier when browning the meat. I like that the lid can be used as a skillet too. Instead of having a knob on the center of the lid. I admit, at first I had to think about how to remove the lid at first. I would usually just grab the knob on the lid, on this I just rotate the lid a little then lift it off.

This comes pre-seasoned but I re-seasoned it anyway, it didn't need it, but use makes cast iron better. I made a great pot roast and sauteed the onions, celery and potato's in the top. This made the entire process much easier. Delicious, my wife posted everything to her facebook and we received "gobs" of complements. I did notice a first use Iron Taste, but the more this is used, the less that will occur. I still needed to wash, and re-season with shortening, that's me, but I've never had any cast iron rust up on me, particularly a new piece. Learning how to use Cast Iron is important.
Honestly! I don't think I could have made a better buy.
Read more

LOVELOVELOVE
5.0 out of 5 stars Very satisfied
Reviewed in the United States on August 30, 2019
Color: RedVerified Purchase
I love also bring able to use the lid as a skillet! It is a 2-fer! I've used both about 8 times each. Stuff does stick, but I just fill with warm water immediately after use and then it is very easy clean up. I've never had enameled cast iron so I can't compare to others, but I love this dutch oven!!! No issues with enamel or chipping.
Read more
103 people found this helpful
Helpful
Comment Report abuse

Ashlee
5.0 out of 5 stars Worked out great for camping
Reviewed in the United States on August 31, 2017
Color: Black Pre-SeasonedVerified Purchase
I bought this Dutch oven to keep with my camping gear. I love camping, but hate packing pots and pans that never quite come clean. I thought this would be perfect. I was right. This worked perfect for all of our meals on the last trip of the summer. It is durable so can be used over flame or with briquettes. Having the lid that doubles as a skillet is super convenient. I am very happy with this purchase. And for the price it can't be beat.
Read more
187 people found this helpful
Helpful
Comment Report abuse
See all reviews

Leam
5.0 out of 5 stars Wish I had one years ago
Reviewed in Canada on March 7, 2020
Color: Black Pre-SeasonedVerified Purchase
I have enjoyed baking/cooking with this Dutch Oven. It is heavy, but then it is cast iron. I have only had it a couple of weeks, but I have made bread and stews in it and everything has turned out great.
Read more
Report abuse

Tee D
5.0 out of 5 stars Good quality and good seasoning.
Reviewed in Canada on June 28, 2020
Color: Black Pre-SeasonedVerified Purchase
We also have the Lodge brand one. And this is just as good. I use it for everything, e.g., the lid for a frying pan and the whole thing for baking bread. Love it.
Read more
Report abuse

Page 1 of 1 Start overPage 1 of 1
This shopping feature will continue to load items when the Enter key is pressed. In order to navigate out of this carousel please use your heading shortcut key to navigate to the next or previous heading.
Back
Next
Pages with related products. See and discover other items: bean cooker, Explore cast iron lids for skillets