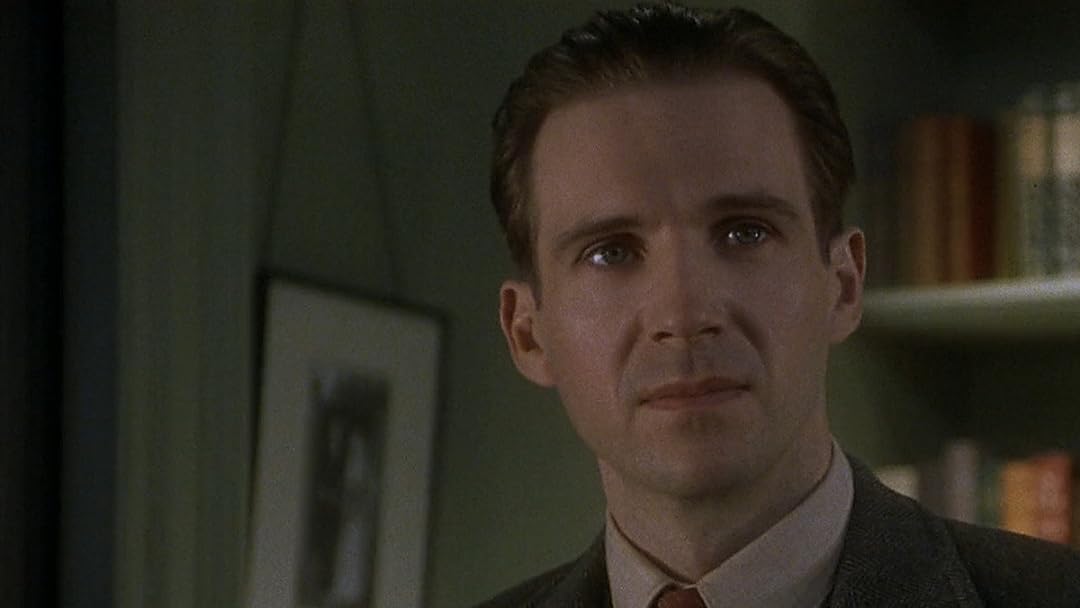 The End Of The Affair

(465)7.11 h 41 min1999R
When a married woman inexplicably ends a deeply passionate affair, her broken-hearted lover attempts to learn why. Ralph Fiennes and Julianne Moore star in this adaptation of the Graham Greene novel.

VideobarbsReviewed in the United States on September 17, 2018
5.0 out of 5 stars
I give "End of an Affair" 5 Umbrellas
Verified purchase
Thanks to Mr. Bezos/Amazon Prime, I found "The End of an Affair", adapted from a Grahame Green novel fascinating. Initially, I started to get bored as it started a little slow, but the wonderful acting of Julianne Moore and Ralph Fiennes almost reached through my screen to draw me back in and I never wandered after that. The story has its' twists and turns, but again, it is the acting that makes this movie about a doomed and bittersweet affair as memorable as Noel Coward's "Brief Encounter". The reason I gave it "5 umbrellas" is that I have never seen so much genuine rain in a love story in all my life. All the characters gave repeated stiff upper lips and crisp umbrellas to the steady wetness and several times the characters comment to one another to get out of the elements or they will "...catch their death...". My only negative comment revolves around the illness of one of the characters that meandered around in the background of the story and got lost sometimes with the rain, the bombing of London and finally a vague, but touching miracle planted at the end that I was actually kind of expecting. So there were loose ends, but again, the acting overcame all of its' shortcomings. Perhaps I'm prejudiced still loving Fiennes in "The English Patient" and Moore in "Still Alice", but I could watch both Fiennes and Moore read the phone directory and remain transfixed.
14 people found this helpful

Mindo'ermatterReviewed in the United States on January 1, 2020
4.0 out of 5 stars
Heartwrenching, Yet Excellent Portrayal of Book!
Verified purchase
After purchasing the book and renting both movie versions,I have read or viewed them in order of release. Hence, this review comes last.

Although I prefer the book above both screenplays, this movie version is by far the best. This film rendition wisely followed the book order of events, while adapting the storyline by consolidating characters to make them stronger, while raising the emotional tension through pacing, sharper dialogue, and vivid imagery.

The acting was well done, and storyline changes reduced confusion and made the viewing experience more believable. Had this movie been made today, it likely would have fewer speciffic affair intimacies shown, which was a major weakness of this 1999 version. However, Graham Greene's religious-moral conflicts are more clearly defined in this version without overplaying the novel's intended ambiguities.

For older audiences, this version is better than the 1955 version. However, I strongly recommend that you include the book as a pre- or post-read to experience better Greene's intentions for this highly insightful and emotional creation.

James R. McgeeReviewed in the United States on February 2, 2019
4.0 out of 5 stars
Interesting but a bit on the mundane side
Verified purchase
I watched this movie primarily for the era in which it took place. A world before cell phones, internet and all the other technological achievements we have today. Movies such as this and Casablanca seem to capture a time when love was more real and meant so much more. This movie is no where in the same class as Casablanca but interesting none the same. They could have shaved 30 minutes off this movie and it still would have been mundane. I gave it 4 stars primarily for the acting of Juliette Moore who plays a woman caught up in an affair with a writer,Albert Finnes, who also happens to be friends with her husband. During on of their liaison meetings London is bombed and Fiennes is injured, in fact thought dead. . Moore makes a solemn promise to God that if He would let her lover live she would end the affair and never see him again. When Fiennes comes around she is determined to make good her promise and tries to stay away but, well, we all know how the course of true love goes. The story line was just good enough to keep you interested to see how things turn out even though they did give a major part of the ending away in the middle of the movie. I urge you to keep watching for there is a bit of a surprise near the final scene.
4 people found this helpful

Cole CReviewed in the United States on September 30, 2015
4.0 out of 5 stars
Adultry as fresh as ever.
Verified purchase
I was concerned that the story might feel dated, but apparently adultery and sin never go out of date. I will NOT comment on the faithfulness to the book of Jordan's film, but I will tell you he does a damn good job as a stand-alone. Fiennes is perfect in modulating his character's moods, and having just seen him as Heathcliff this is even more impressive. I want to give Stephen Rea particular praise as Henry, who could easily just seem dull and pathetic as the cuckhold (as was more the case in the original film). Here Rea brings a very subtle dignity, charm and world-weariness to Henry that makes you respect him, notwithstanding the situation. He is impressive. And the smaller parts are well played, Parkis the detective, and his son Lancelot are, as someone else has noted, right out of Dickens (that's a compliment).

My only issue is Julianne Moore as Sarah. She looks period, she's pretty, and seems happy enough to take her clothes off, but she just seems duller than dishwater. Her behavior before and after her epiphany is pretty much the same. Rea and Fiennes have more chemistry than Moore and Fiennes, even when they're tumbling. That said, don't let it put you off. The film is very very good and worth your time. Especially with what passes for romance in Hollywood these days. Go for it.
18 people found this helpful

RELUCTANT BOOMERReviewed in the United States on February 28, 2021
5.0 out of 5 stars
Beautiful!!!
Verified purchase
"The End of the Affair" is a truly beautiful film, with superb acting, cinematography and story by Graham Greene.
Though it rains in almost every scene, it is uplifting for the human spirit. Love is complicated - this film
is honest about this and shows both the beauty and torment of love, jealousy, loss and commitment. It covers
the entire range of human emotions in a brilliantly moving way - the acting is wonderful and the story
is flawless. How to navigate jealousy, sexuality and death all wrapped together in a story that will grip both
your heart and your mind. This is an important film about having the courage to love and be loved.
One person found this helpful

prisrobReviewed in the United States on September 16, 2018
4.0 out of 5 stars
Long Ago
Verified purchase
This film attracted me because of the actors, and it kept me going because of the actors. Henry Miles, played by Stephen Rea, meets an old friend, Maurice Bendix, played by Ralph Fiennes one night in a rainy London. Henry is married to Sarah, played by Julianne Moore, and Henry is depressed. It seems he thinks Sarah, is having an affair. This wakens, Maurice, because he had been her lover. What follows is a sometimes convoluted story of betrayal, sorrow and misery.

As we follow these three characters, Maurice, Henry and Sarah, we see in flashbacks, the entire story of the three. Henry has hired a private detective to spy upon Sarah, though it is really Maurice who did the hiring and the follow up. What we think is the story is not in reality what occurred, or is it?

The acting is top notch, and the music swells when needed. A look at long ago when we think life was easier, but, no it was not. However, this is a fine film to spend a rainy afternoon.

MLReviewed in the United States on March 31, 2021
1.0 out of 5 stars
Not faithful to Graham Greene's original novel
Verified purchase
I was very disappointed from watching this movie. It is an adaptation of "The end of the affair" original novel by Graham Greene, but Greene must have truly rolled over in his grave from this poor imitation of his great work. The movie cynically uses the shell of his story but then gradually shifts the balances, alters the ending and thus arrives at an entirely different conclusion. In the aftermath, there is nothing likable about this new story: it seems pointless, unlikely to happen, one-dimensional, and even somewhat ridiculous and boring, a forced cliche' romance plus some cheap religious stuff. Even if one has not been familiar with G. Greene's novel, one should suspect that the original story cannot be so blatantly stupid: Graham Greene was one of the leading English novelists of the 20th century! Whoever is reading this review, please do yourself a favor and read the book. We all know how Hollywood is obsessed with sex and how it has no understanding (or purposefully blocks any understanding) of even a slightly higher purpose. This movie is yet another sad proof for that.

NereusReviewed in the United States on June 12, 2021
4.0 out of 5 stars
Pretty good
Verified purchase
Why the hell they chose to remain so extraordinarily close to both the plot and the actual words of the novel for 85% of the film, only to depart wildly at one of the most crucial points before coming back around at the end is either a mystery or likely to make me even more cynical about humanity. The elision between the priest and the atheist is also kind of odd, though more understandable, I guess.
Anyway, it's a fantastic story and the cast etc. Is excellent. A bit of laziness with choosing to have so much narration, perhaps, but this is a common tendency with 80's/90's GG adaptations and forgiveable.
The Third Man is infinitely better, of course; and The Quiet American is more faithful and better generally. This is still worth seeing, perhaps even owning.
See all reviews
Back to top
Get to Know Us
Make Money with Us
Amazon Payment Products
Let Us Help You
EnglishChoose a language for shopping. United StatesChoose a country/region for shopping.
© 1996-2021, Amazon.com, Inc. or its affiliates