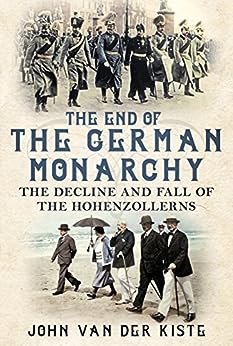 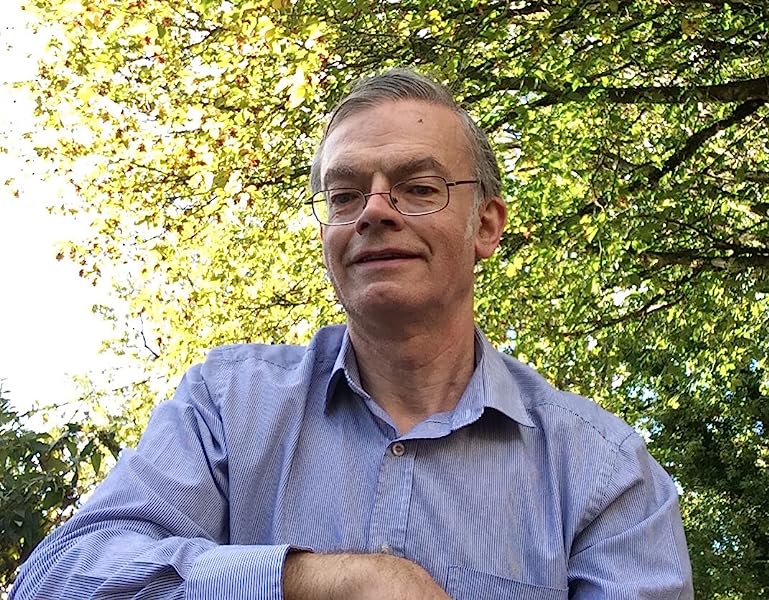 The End of the German Monarchy: The Decline and Fall of the Hohenzollerns Kindle Edition

by John van der Kiste (Author) Format: Kindle Edition
See all formats and editions
Sorry, there was a problem loading this page. Try again.
By the autumn of 1918 Germany was on the verge of starvation-the result of four years of war and blockade. Sailors led a revolt in Wilhelmshaven on 29 October 1918, followed by the Kiel mutiny in the first days of November cascading eventually to Germany's capitulation and the Kaiser's abdication. The Hohelzollern family's rule had come to an end. Royalty historian John Van der Kiste, the author of the recent best-selling `Prussian Princesses' here provides a full analysis of the Kaiser's family heritage, his leading part in the Prussian militarism which in recently unified German led to a full national martial tradition simply bursting for a fight. The book also tells of the vital events in later 1918 which led to the partial and then full abdication, and the Kaiser's pitiful escape to the neutral Netherlands, unwilling hosts for a somewhat unwelcome visitor. The Third Reich also comes into play with Hitler's initial ambivalent attitude, and then the full floral tribute after the Kaiser's death. It also covers the anti-Hitler plotters who intended to use a Hohenzollern Prince as a figurehead to provide legitimacy to a post-Hitler Germany.
Read more
Previous page
Next page
Due to its large file size, this book may take longer to download

John Van der Kiste has published over forty books including works on royal and historical biography, local history, true crime, music and fiction, and is a contributor to the Oxford Dictionary of National Biography. His previous titles include Queen Victoria's Children, Kaiser Wilhelm II and The Romanovs: Tsar Alexander II of Russia and his Family and ‘Alfred―Queen Victoria's Second Son’ and ‘Prussian Princesses’ for Fonthill. He lives in Devon. --This text refers to the hardcover edition.

4.5 out of 5 stars
4.5 out of 5
74 global ratings
How are ratings calculated?
To calculate the overall star rating and percentage breakdown by star, we don’t use a simple average. Instead, our system considers things like how recent a review is and if the reviewer bought the item on Amazon. It also analyzes reviews to verify trustworthiness.
Top reviews

Deborah A. Wedick-Cooper
5.0 out of 5 stars Essential Reading
Reviewed in the United States on January 25, 2018
Verified Purchase
John Van Der Kist is my go to authority for the minutia of the German monarchy. Not only has he meticulously researched every point, he has a broad sense of the factors most pertinent to the decline of this once all powerful family. He also has that most precious gift. He does not inject a personal agenda or interpretation and lets the historical record speak for itself. I always look forward to his books.
Read more
25 people found this helpful
Helpful
Report abuse

Errol Levine
4.0 out of 5 stars A brief well-written history of the three Hohenzollern Emperors without much new information
Reviewed in the United States on May 11, 2018
Verified Purchase
I enjoyed reading this book about the decline and fall of the Imperial House of Hohenzollern. The book is relatively brief at about 161 pages. However, the author manages to cram in a lot of relevant information about the reign of three German emperors, William 1, Frederick III and William II. There have been many books on this topic. I cannot say that there was much in the book that was new to me. Indeed, I always wonder why it is necessary to keep publishing books on an already exhaustively covered topic unless new information emerges from Royal archives or other sources. However, the book is very well written and would constitute an excellent introduction to the three reigns and the Bismarck period that played such an important role in the events leading to the First World War.

The book is dominated by William II. This bizarre figure who had a love-hate relationship with England and his English relatives did not as the author points out actually precipitate the Great War. However, his bellicosity and encouragement of the military in Germany created the atmosphere in which a major European war could be precipitated by any incident. So it took the assassination of the Austrian Archduke, Franz Ferdinand, at Sarajevo to provide an excuse for war since Austria and Germany were allies.

The author also provides a brief account of the somewhat tragic figures of Emperor Frederick III and his wife the Empress Victoria, who was Queen Victoria’s eldest daughter. This couple with their liberal leanings waited in the wings for years but Frederick’s father, William I, lived on into his nineties and died only a few months before his son. Frederick, who was a heavy smoker, had fatal laryngeal carcinoma that led to his premature death a few months after he assumed the throne.

The author traces Emperor William II into his exile at Huis Doorn in Holland after the German Revolution at the end of the Great War. “Kaiser Bill” did a lot better than most of the other European monarchs who lost their thrones and in some cases even their lives after the war. He had a pleasant if somewhat embittered existence in Holland for many years after his abdication. He and his sons flirted with the Nazis. I did not think I would ever agree with Hitler on any subject, but I do share Hitler’s contempt for William II and his wayward sons.

The author also describes the children of William II – six sons and one daughter. The sons were a mediocre group indeed and it is difficult to distinguish them from one another in this book since they all undistinguished in every way. The lack of a genealogical table in this book is a serious deficiency and makes it difficult to identify the Emperor’s sons and their wives as well as the members of the minor German Grand Ducal and Royal houses that are often mentioned. However, the author does provide some interesting details about the William II’s first wife, the Empress Augusta. The illustrations are profuse and excellent.

In conclusion, this is an easy book to read and provides a good introduction to the three German emperors who reigned after German unification. However, it is somewhat lacking in detail and adds little new information on this already well-covered topic.

Bonnie
5.0 out of 5 stars A breadth of characters, generations of time.
Reviewed in the United States on January 2, 2018
Verified Purchase
Well done, easy to follow and containing enough political background to flesh out the family in their environment; large family, turbulent times.
Read more
10 people found this helpful
Helpful
Report abuse

L. Sabin
4.0 out of 5 stars Primarily the Story of the Last Kaiser, William II
Reviewed in the United States on January 11, 2019
Verified Purchase
The rest of the story was made up more of tangents of Kaiser William II's extended family, and gives simple explanations of what happened to them up until our present time. Still a good, if tragic, read. I almost began to feel bad for the Kaiser. This title is rather pricey in the print edition but I thought well worth the 10.00 I paid for the Kindle version.
Read more
3 people found this helpful
Helpful
Report abuse

Jason H
5.0 out of 5 stars A Must read
Reviewed in the United States on July 26, 2019
Verified Purchase
This book was even better than I anticipated. I highly recommend reading this as a summary about Sleepwalkers and Kaiser Wilhelm II: A Life in Power. I couldn't set this book down once I got started. Gave great accounts of the Kaiser and also his children. This trio of books with this being the last was perfect.
Read more
2 people found this helpful
Helpful
Report abuse

817Amazon Customer
4.0 out of 5 stars Four Stars
Reviewed in the United States on March 4, 2018
Verified Purchase
A very detailed but easy to read book. It explains very clearly what happened and why
Read more
8 people found this helpful
Helpful
Report abuse

Michael Dewit
5.0 out of 5 stars Important time in are history
Reviewed in the United States on April 29, 2018
Verified Purchase
This a very good book about the monarchy at the end the 19th Century and beginning of 20th Century. Very important period in the history of the world we’re still feeling today.
Read more
4 people found this helpful
Helpful
Report abuse

Earl Lopez
5.0 out of 5 stars Found the book quite informative
Reviewed in the United States on February 6, 2021
Verified Purchase
The book was thoroughly researched and well written. Kaiser Wilhelm displayed bombast, but inwardly seem to lack confidence in himself. Although he wore military uniform, he was head of the armed forces in name only. He blamed others for losing WWI but took no responsibility for his own personal failures.
Read more
Helpful
Report abuse
See all reviews

Charlie
4.0 out of 5 stars Thoroughly enjoyable
Reviewed in the United Kingdom on February 24, 2018
Verified Purchase
A thoroughly enjoyable read. William II comes out of it a little better than received wisdom had led me to believe. "Kaiser Bill" was flawed, certainly - and must take the lion's share of responsibility for Germany's quest for war - but, set beside that, the author shows he was, to an extent, swept along by circumstances and events outside of his control. Not five stars from me, as I would have been interested to know how he afforded his comfortable exile; did he have funds secreted outside of Germany before his abdication? Did the Weimar Republic and, then, Hitler allow him access to funds in Germany?
Read more
9 people found this helpful
Report abuse

J. D. Willmott
5.0 out of 5 stars Prussian royal family before and after the Great War
Reviewed in the United Kingdom on January 30, 2018
Verified Purchase
Another very readable history by Mr Van dear Kiste - only slight quibble is the typesetting and page layout
Read more
2 people found this helpful
Report abuse

Susan Weir
5.0 out of 5 stars Present for grandson
Reviewed in the United Kingdom on January 15, 2022
Verified Purchase
My grandson loved the book
Read more
Report abuse

MR
4.0 out of 5 stars Kings finding there way through a tough generation.
Reviewed in Australia on March 23, 2020
Verified Purchase
I highly enjoyed reading this side of a Monarchy. I have read a lot about the English monarchy and it was fascinating to read what it was like to be able to abdicate from being a King, live in exile while the rest of the Kings family still had free passage to Germany in the war & also our Hitler used the monarchy to establish his political party.
Read more
Report abuse
See all reviews