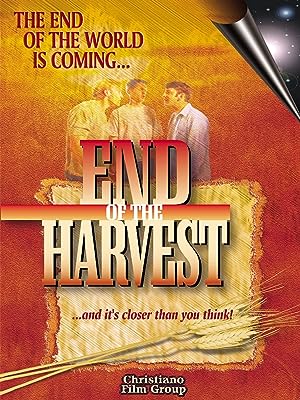 End of the Harvest

(160)5.254min20167+
A college philosophy club meeting filled with atheists humiliate a new believer as he tries to prove to them the existence of God. As a result, a Christian out of fellowship with the Lord seeks revenge.

Paul L. UnderdownReviewed in the United States on February 10, 2020
5.0 out of 5 stars
Share the good news!
Verified purchase
Great representation of the times to come soon. God's determined timeline does not vary. Share with your friends and co workers The harvest is near.
Luke 10:2-3
2 Therefore said he unto them, The harvest truly is great, but the labourers are few: pray ye therefore the Lord of the harvest, that he would send forth labourers into his harvest.
3 Go your ways: behold, I send you forth as lambs among wolves.
3 people found this helpful

Merry's Dad3Reviewed in the United States on July 25, 2013
5.0 out of 5 stars
Coming Soon to a Planet Near You ...
Verified purchase
I really like the David AR White, Brad Heller and Kevin Downes films. I've seen their "grown up" movies (The Moment After, Six The Mark Unleashed, Blink of An Eye, Mercy Streets, Late One Night) and now I'm going farther back into their careers to when they were much younger (The Crossing and End of the Harvest.)

In regard to what the movie is about, I wouldn't say much more than what is written on the back of the DVD case, because to say more would give too much away. It had a great, although not completely unexpected, ending. The theory introduced about the time theory in the Bible is interesting and worth considering.

I am very happy with my purchase. Oh, one last thing. Don't miss the interview with David AR White in the Special Features.
One person found this helpful

DorothyReviewed in the United States on July 19, 2019
5.0 out of 5 stars
My very first end times movie and my introductioon to David A R White.
Verified purchase
The first time I ever saw this movie was late one night on TBN when Paul and Jan Crouch were still alive. I liked it right away. Christiano films have been top of the list for me since then. I am so happy to own it now for myself!! Now, I can watch it whenever Thank you, Amazon!!

Hawaii 5-0Reviewed in the United States on August 17, 2019
5.0 out of 5 stars
Didn't Expect Much, BUT, Loved it!
Verified purchase
This DVD was something I bought because I love movies of Faith and it's low price.
Didn't expect much from it, when ordering this product, but it was a great story and very entertaining film.
Totally reinforced my faith in God

here_is_your_reviewReviewed in the United States on September 8, 2002
5.0 out of 5 stars
Excellent treatment of premillenniallism
Verified purchase
I first saw this movie late one night on Christian TV. What an impact the opening scenes had on me! I won't spoil it for you here, but it really gets the movie off to a great start. A Christian reluctant to share his Faith with non-Christians is motivated to "join the harvest".
I can tell you the basic story is set at a modern-day university (shot on location at Arkansas State University). A group of evangelical college students attend a secular philosophy club meeting where one of their own is defending the existence of God. Unfortunately, this young man, while sincere, did not prepare properly for such an encounter and winds up being ridiculed mercilessly. One verse comes to mind. It is often misused to support secular scholastical study as "Study to show thyself approved". However in proper Biblical context it is "Study to show thyself approved, rightly presenting the Word of Truth accurately" (paraphrased). This student simply didn't do his homework.
After the defeat, another of the students decides to present a controversial topic based upon an archived paper from a former student of the same university. He studies hard to attempt to present the material properly. But he repeatedly challenges the philosophy group's organizers, telling them of their approaching comeuppance. The leaders of the philosophy group decide to perform a pre-emptive strike against the student by discrediting his personal character. This sets the stage for the reluctant evangelical to step up to the plate.
He's not allowed to escape. A seemingly kind lady proceeds to chide him relentlessly for his reluctance and demands that he present the advertised material. What are her true intentions? She doesn't seem friendly at all and the philosophy group is amused at her seemingly hostile statements. There are surprises in store for everyone.
Regarding the presentation, the material is Biblically accurate and proper in context. There is no date-setting in the film as the overall theme is "signs of the times". Beyond that, there is a potentially plausible theory, rooted in the regathering of Israel, (Isaiah 66:8, Ezekiel 36:24, Amos 9:15 et al), and their eventual awakening of Hosea 6:2. Given that the rebirth of national Israel is now an historical fact, the prophetical accuracy of Isaiah 66:8 and Hosea 6:2 (etc) cannot be denied.
I would have preferred to own this video in DVD format as most of my library is now DVD. A wide-screen version would have been nice but I don't know if the movie was shot in that format. Hopefully, a DVD version with trailers, commentaries, and other bonus materials will be made available in the near future. I recommend this movie for all ages, and especially for youth groups and college-aged students. Enjoy!
53 people found this helpful

john smithReviewed in the United States on July 7, 2021
5.0 out of 5 stars
Wow Amazing
Verified purchase
Whether you are a Christian in college or high school or any school this movie is for you. It is also for those who are seeking truth, its great to not only see a Christian movie but one that also has a clear plan of salvation. I would also encourage anyone who is not a Christian to watch and comment. Give this movie a try you may learn something.

One day this world will come to an end, here's the question; Are you ready?

fiberReviewed in the United States on February 22, 2019
5.0 out of 5 stars
NObody knows the day or hour for the end to come.
Verified purchase
Actually some new info I didn't know before though I knew 6000 years is the length of time we have before God tells Jesus to come back to earth. Even the movie keeps this in tact explaining nobody knows the day or hour. Good bible study worth while to any body Christian or curious heathen.
See all reviews
Back to top
Get to Know Us
Make Money with Us
Amazon Payment Products
Let Us Help You
EnglishChoose a language for shopping. United StatesChoose a country/region for shopping.
© 1996-2021, Amazon.com, Inc. or its affiliates