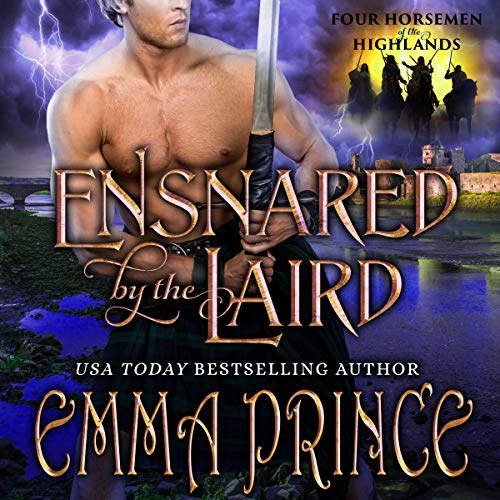 Ensnared by the Laird: Four Horsemen of the Highlands, Book 1

4.5 out of 5 stars
4.5 out of 5
157 global ratings
How are ratings calculated?
To calculate the overall star rating and percentage breakdown by star, we don’t use a simple average. Instead, our system considers things like how recent a review is and if the reviewer bought the item on Amazon. It also analyzes reviews to verify trustworthiness.
Top reviews

Lori Dykes
5.0 out of 5 stars The Four Horsemen! Oh Yes!
Reviewed in the United States on April 29, 2020
Verified Purchase
The Four Horsemen of the Highlands. Domnall, Gregor, Tavish and Artair. Formed by survival and the bonds of a unified cause. Return Scotland's throne to the rightful King and vengeance on those who stole it and killed their people!
Yowza!! Think of those lines in a booming Scottish voice, because from the beginning I was carried away as these four warriors made a heart pounding escape from hanging and could truly see it in my mind!! They had to split up and this is about Laid Domnall MacAyre, oh aye, a braw warrior indeed!
His focus was on Murray, a traitor and he finally ran him down at the man's keep. But when he is ready to slit his throat, he finds instead the man's sister, Lady Alisa. Oh yes she would do perfectly well so he took he in order to make Murray meet him.
Then the real adventure begins! "She was far too bonny. Dangerously bonny. Bloody hell. Aye, she was dangerous- a dangerous distraction from what needed doing. Still she was his greatest weapon against Murray." She would draw him to Domnall.
Emma Prince is at her best with her phenomenal pen that weaves historical fact with remarkable fiction to bring the start to this new series. Am I excited? Aye pure barry lassies!
Read more
5 people found this helpful
Helpful
Report abuse

Pat Deliz
5.0 out of 5 stars LOVE THIS BOOK! Read in one night, could NOT put it down!!
Reviewed in the United States on May 7, 2020
Verified Purchase
Ensnared by the Laird, first in the series Four Hosemen of the Highlands by Emma Prince -- really, really enjoyed this book!! It starts with our hero Domnall MacAyre imprisoned, waiting to be hung, along with 3 of his fellow Scotsmen. By a miracle of nature, they all escape with their lives and as per the book description, Domnall goes to kill Andrew Murray to seek revenge only to find his sister, Ailsa Murray. This is a story of revenge, seeking and finding truth for both of them, and ultimately love that goes beyond vengence. A love that is more important than everything. Oh, and did I mention Domnall is sexy, gentle, protective and a total badass?! I really enjoyed the entire journey that Domnall and Ailsa took, both learning so much, Domnall teaching Ailsa and even more important, Ailsa teaching Domnall. They are a wonderful hero and heroine, and I cannot wait to see more of them, hopefully in the final book in the series, if not before. I am really excited for the next books in this series and will definitely be watching for their release!
Read more
2 people found this helpful
Helpful
Report abuse

NRoos
5.0 out of 5 stars Her Best Yet!
Reviewed in the United States on May 5, 2020
Verified Purchase
I truly believe this is Emma's best book yet, and that is a really hard thing to say. All of her books are wonderful, but there is something about this one that catches you at the very beginning. The amount of research that went into this historical romance was tremendous. She even researched if lightning struck a tree, while someone was hanging without touching that ground, from that tree. would the be electrocuted! That was a mouthful to even write for this review. Emma's attention to detail, descriptive characters and scenes , and tone keep the reader involved. I loved it! I can't wait for the next one in her new series.
Read more
2 people found this helpful
Helpful
Report abuse

RaLawinger
5.0 out of 5 stars Can’t wait for book 2
Reviewed in the United States on July 1, 2020
Verified Purchase
I found this book to be a little shorter than I wanted it and the feelings of love to be quick. I wasn’t disappointed. Just would love more story! :) Does he take Aisla back to his lands as his lady? How did his clan fare in his absence? I have so many questions and can only hope that there will be a 5th book to tie up all the questions, if the others don’t address them. Nonetheless, I really enjoyed this story and Ailsa’s character. She is strong and all that is good I’m the world. I am convinced. She doesn’t know her brother, but tries to protect him, until the truth is revealed. Then, she is concerned about Domnall’s soul.
Trigger warning: the book has an attempting hanging, but I promise it isn’t too bad. I cannot wait for the other books and to learn more about the other 3 men we met at the beginning of this story. I really enjoyed Fern. He was a source of humor and I loved seeing how he changed towards our hero. Anyway, this story was well done. Highly recommend.
Read more
One person found this helpful
Helpful
Report abuse

Edito Mario Gil, Jr.
5.0 out of 5 stars Great book!
Reviewed in the United States on June 14, 2020
Verified Purchase
As always, Emma Prince has again captured my attention with this new series! In this book, Domnall’s focused desire for revenge can only be conquered by his unconscious growing love for Ailsa. Constantly torn between the two, keeps the reader going page after page on a hunt for discovery of how love will be able to overcome commitment. As with every book, the author provides the reader with the interesting research and its relationship to the story, providing real locations and people that make the reader feel present in the story. I highly recommend this romantic love story with its historical details to all lovers of the Scottish Highlands.
Read more
One person found this helpful
Helpful
Report abuse

She who shall remain nameless
TOP 1000 REVIEWER
4.0 out of 5 stars 3.5 stars rounded up to four
Reviewed in the United States on April 29, 2020
Verified Purchase
Let me start out by stating that this book was extremely well researched and well written. Unlike a lot of stuff that I have read recently, it was also very well edited. I liked the whole four horsemen of the apocalypse idea, too. Although it did keep my attention, there was still something about this story that didn’t connect for me. The heroine was too naive in my opinion regarding her brother’s character for starters. I do intend to read the next book in the series though to give it a fair chance.
Read more
2 people found this helpful
Helpful
Report abuse

Nancy
4.0 out of 5 stars Vengeance.
Reviewed in the United States on August 18, 2021
Verified Purchase
Laird Domnall MacAyre and 3 other lairds are set to hang for their role against the Pretender king. When they escape, they agree to work separately to overthrow the pretender and seek vengeance on the traitor responsible for the deaths of thousands of their soldiers. Domnall sets out to find the traitor and finds and kidnaps his sister Ailsa instead to use as bait. However, all does not go as planned. Ailsa barely knows her brother and has no strong affection for him since he tried to marry her off to a man 3 times her age. She also has no idea what a bad man he is. As Domnall and Ailsa spend time together tracking her brother, their attraction grows and they start to question what is important and what is just.
Read more
Helpful
Report abuse

Kindle Customer
5.0 out of 5 stars Wonderful
Reviewed in the United States on May 6, 2020
Verified Purchase
This was a great story. I enjoy reading about Highlander...this author is one of the best. Happy she started a new series
Read more
2 people found this helpful
Helpful
Report abuse
See all reviews

Amron1966
4.0 out of 5 stars Nice book but slow...........
Reviewed in Canada on October 6, 2020
Verified Purchase
The storyline on this is very slow reading to the point of boring me.
Read more
Report abuse
See all reviews
Back to top
Get to Know Us
Make Money with Us
Amazon Payment Products
Let Us Help You
EnglishChoose a language for shopping. United StatesChoose a country/region for shopping.
© 1996-2021, Amazon.com, Inc. or its affiliates