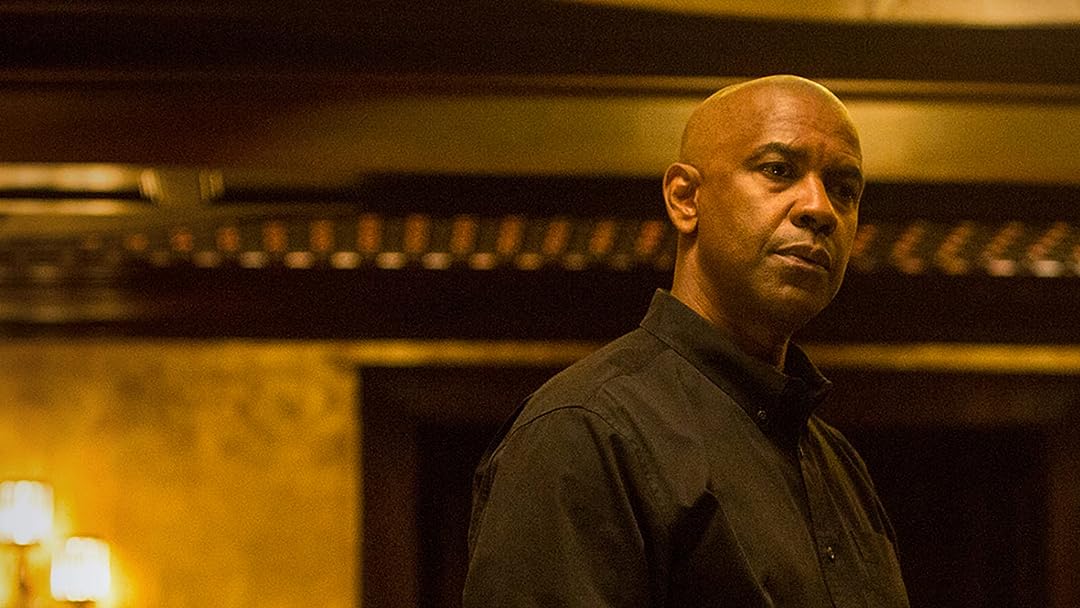 (44,678)7.22 h 12 min2014X-RayR
McCall, who has put his mysterious past behind him, comes out of self-retirement to serve vengeance against anyone who would brutalize the helpless.

Joseph K. WattsReviewed in the United States on September 6, 2015
5.0 out of 5 stars
Excellent Movie and Stop the whining about the movie being cliche
Verified purchase
This movie for Denzel Washington is like "Jack Reacher" was for Tom Cruz. The theme of the movie is the tried and true action movie theme wherein a "retired" highly trained agent/operative/soldier/detective/etc. . . trying to cope with the demons from his past overcomes his PTSD by coming out of retirement to fight for those people who can't help themselves, usually little girls/old ladies/wrongly accused/etc. from the evil bad guys usually engaged in drugs/prostitution/gun running/slavery/patsy/scape goat/etc. . . through an ever escalating display of the "special training" to right the wrong. If that theme appeals to you, this one is one of the best if seen.

Thus, for all those that have criticized the cliche theme of the movie, the movie is not the problem. You are. You either ignored the trailer telling you what to expect or watched the trailer and were, idiotically disappointed that the advertisement for the movie delivered what it told you it would. A piece of advice. Don't watch genres that your tired of or weren't really interested in at all. If you do and then don't like it, it's your fault, not the movie makers. Giving a low rating on a move because of your ignorance just reinforces what you are

JohnReviewed in the United States on March 2, 2018
4.0 out of 5 stars
Welcome Back Robert McCall
Verified purchase
When this was first announced, I had my doubts. Then I saw it on cable and happily my doubts were removed. This movie was inspired by the tv show, and Edward Woodward was to Robert McCall like Sean Connery was to James Bond.

Denzel Washington and the rest of the cast and crew get your buy in at the very beginning. This movie has more of a believable edge that the tv show, and Denzel Washington's portrayal of Robert McCall is perfect. He plays McCall as a man who was just sitting on the sidelines, trying to live the remainder of his life in peace and harmony, and then crime and violence enter his life and he, as his character states it simply, "Has to hit something stupid."

The side stories fit into the main story, there is a nod to the original series, yet the movie explores something that the tv show did not. One can be a force for good by being a coach, a friend, and an active member of the community, but be prepared to stand up for what you believe and hold those who have our public trust accountable.

As for music, special effects, dialogue, character development, cinematography, pace, this movie has it all.

Cheapskater999Reviewed in the United States on August 15, 2016
5.0 out of 5 stars
A highly-competent good-guy action hero fights evil adversaries
Verified purchase
Our seemingly ordinary working-class hero slowly decides to take on the dreaded evil "Russian Mafia" to help clean up clean up his neighborhood. He's experienced and meticulous and oh so resourceful... especially when he finally lures his adversaries to HIS turf... the big-box home improvement store where he works. He's such an accomplished warrior that he hardly ever touches guns throughout the film so there are many nifty weapon-surprises. Amazingly, none of it comes off as trite entertainment because his enemies feel authentic and very dastardly down to their devilish tattoos. It gets serious! But we also see Denzel's warmth shining through. If you're into a competent good-guy action hero fighting evil with a little help from his friends, and you don't mind graphic bloody scenes, this film has about everything you need. I was glued to the screen.
82 people found this helpful

ClarityOfMindReviewed in the United States on January 28, 2019
5.0 out of 5 stars
Absolutely exciting action/drama with Denzel!
Verified purchase
This guy is a champion actor… A true chameleon who becomes the character naturally and 100%

SEMI-SPOILER: He is a “common man“ working at a huge hardware department store (like Home Depot) and is very kind and friendly with everybody he encounters… Sort of a loner and seems to have difficulty sleeping so he goes to a local diner and befriends a few characters who end up needing his many “hidden talents.“ He is cool, calm and collective… Never losing it, but doing those things are heroes do in dire situations… Denzel Washington is amazing IMHO.

An excellent addition to your DVD library at a very reasonable price!
16 people found this helpful

Rocky MortensenReviewed in the United States on December 2, 2018
5.0 out of 5 stars
Great Movie!
Verified purchase
The Equalizer is NOT Man on Fire. The Equalizer is NOT your typical action flick. Washington's Robert McCall is not self-destructive or addicted. Though there are great choreographed fights, special effects and fantastic explosions, The Equalizer is more Bourne than Bond. Denzel Washington portrays this ex-CIA operative, who is content to live a meticulously simple life. Quietly contained, but with ever-building intensity, Washington turns in another stellar performance.

Chloe Grace Moretz, as the teenage prostitute, is a force...

Antoine Fuqua, the directer who brought us Training Day, which earned Denzel his Best Actor Oscar, helms this movie with a steady hand. His direction of the drama and the action blend seamlessly, drawing us into the complexity of this character-driven piece.

Robert McCall keeps to himself, content to live his ordinary life; he is every man's man. But, his steady moral compass, and strong sense of justice lead him back into the fray. This character is not infallible, and he is not looking for trouble. He just wants what's right.

This film is a superbly acted, exciting and violent ride! In the pursuit of justice, there will be blood. But this time, you'll be rooting for the good guy, and I, a fifty years young woman, loved every minute of it!
6 people found this helpful

J L WReviewed in the United States on January 7, 2015
5.0 out of 5 stars
Ah so many disappointed (40) one star reviews
Verified purchase
Ah so many disappointed (40) one star reviews. Guess I should never be surprised. Hey, this is a kill the bad men movie. You couldn't have guessed this by the title??? It's one of the things Denzel does really well. (Remember Man on Fire)? Could he make other more "meaningful" movies absolutely! ---Where are they- the scripts for these "meaningful movies"? Not so very many out there these days. So he is making a living, and doing it with a lot of style! I loved this movie, corny scenes and all. He is just so dam good at anything he performs in. And who does not want to see thugs get what they deserve and then some!!! Unless you have a special soft side for criminals of this ilk. It quite often does not happen in court in real life because well, that's just how the system works. So we get to see it in make believe on the big screen. We forget ourselves for a brief moment in time, have a laugh or two, and there were some very dark humor parts in this movie which I did appreciate thank you. So lets remember that this is Hollywood, and most of what appears on the screen is Hollywood tinted. If you want real, then watch documentary films, if you can find any of those that are totally accurate that is. I give this movie 5 stars because it was entertaining, had imagination,( loved the hardware weapons ) and I like to see the mean guys get crushed. And no I'm not a GUY, I'M A GIRL OMG!!! We can get down with the "kill the bad guy" too. It's not just the guys that liked this movie.
31 people found this helpful

Cato4Reviewed in the United States on February 21, 2020
3.0 out of 5 stars
Denzel and Chloe soar, but some editing and production elements rubbed me wrong
Verified purchase
Denzel Washington was fantastic. His fight scenes were dazzling, but his whole character was dazzling. He's like an AA Jason Bourne and more intriguing than Bourne. And Chloe Moretz is an amazing actress. She gave her character charm and magnetism. And, she and Washington have tremendous screen chemistry. But, here's why I only give it a 3, and keep in mind, 3.5 is more like it. On a scale of 10, I'd give it 7.

First, I didn't like the heavy-handed music. It's not that the music was bad; it was just too heavy. It weighs on the movie like a weight. A little subtlety would have been nice.

Second, it's too long. Some of the scenes drag. For instance, the fight-out in the Home Depot at the end dragged on way way too long. It should have been half as long. And the very first scene was a tour of his apartment, before we even see him. And I suppose the point was to show how neat it was (he' supposed to be O-C) and also sparse and spartan (he's supposed to live like a monk). But those points should have been made subtly and not via a long silent tour. You expect more than that at the beginning of a movie.

And then the worst thing of all, and this is a little bit of a spoiler, was the decision to send him to Russia at the end. So, after taking out this division of the Russian Mob, he goes to get "the head of the snake"-in Moscow. So, in just 3 days, there he is in control of everything at the guy's fortress in Moscow? In three days? It would have taken him longer just to get a visa. It would have taken half that time just to fly there. That whole element was very far-fetched, and the story didn't need it. However, I did find it cool that, like Bourne, McCall was multilingual, and Denzel Washington did a great job with that too.

So, all in all, I have no regrets renting it and watching it. It was definitely worth the time and money. But, I think it could have been edited better. And I am saying that as someone who has written, produced, and edited a film that is on Amazon. It's a low budget indie film called My Stretch of Texas Ground. It's not rated nearly as high as this one, but, that's because it is very controversial and polarizing. People either love it or hate it.
3 people found this helpful
See all reviews
Back to top
Get to Know Us
Make Money with Us
Amazon Payment Products
Let Us Help You
EnglishChoose a language for shopping. United StatesChoose a country/region for shopping.
© 1996-2021, Amazon.com, Inc. or its affiliates