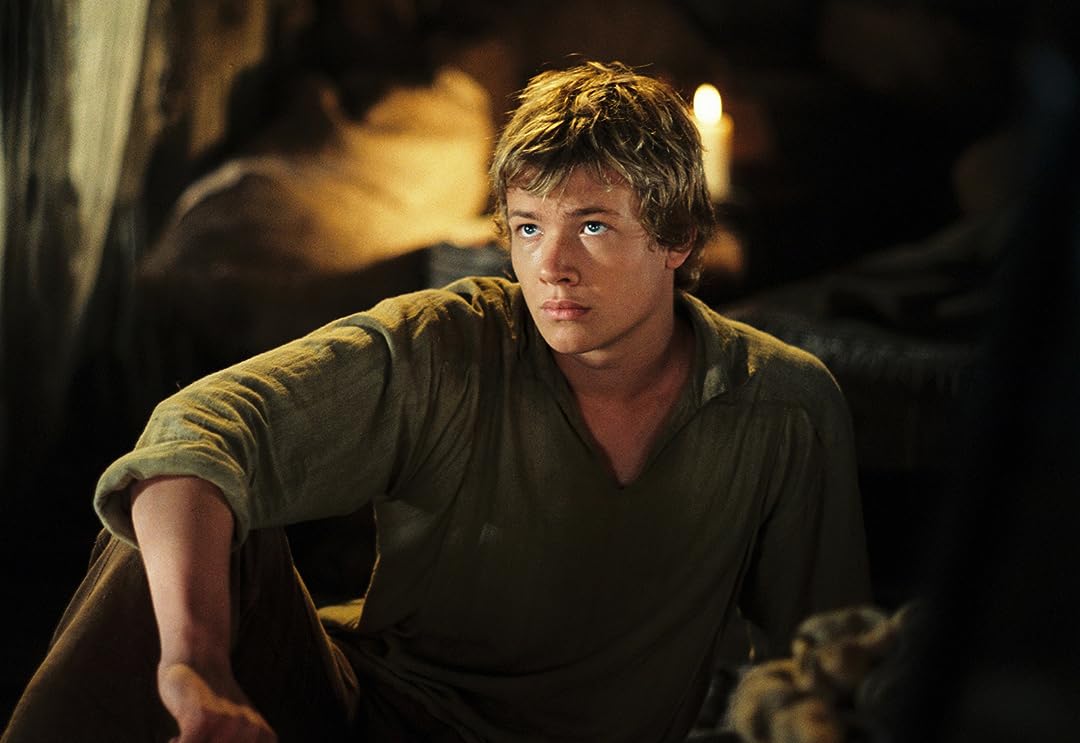 (3,517)5.11 h 43 min2006PG
In a mythical time, a teenage boy becomes a dragon rider with the help of a wise old man, and with his newly-hatched dragon, avenges the murder of his uncle, rescues a beautiful warrior, and battles a tyrannical king.

Stephanie G.Reviewed in the United States on August 12, 2019
2.0 out of 5 stars
VERY loosely based on the books
Verified purchase
I'm happy for Christopher Paolini in that his book was opted for film not long after being published, which speaks to its potential. Unfortunately, the people behind the movie failed to deliver. I'm pretty sure that back in 2006 I thought this was a fairly good movie. It was bright and fantastical, if a little cheesy. Now that I've read the books, it's an utter disgrace. I can only imagine how the author felt after the world and lives that he wonderfully created were diminished so. Often, movie adaptations of books fall flat of expectations but this one... I can't express how disappointing it is. The timeline was totally wrong, and the characters were nothing like Christopher Paolini's, in looks or in actions. The only redeeming quality for me would have been that Jeremy Irons played Brom, but only if he were true to the book's character. I'm almost torn about John Malkovich playing Galbatorix, because he's quite possibly, in my opinion, one of the worst actors ever, and I cannot take him seriously. In short, the movie should be described as VERY loosely based on the books.
19 people found this helpful
Report abuse

R. CoatsReviewed in the United States on September 21, 2017
3.0 out of 5 stars
Loved the book series
Verified purchase
Loved the book series. The failure of the movie was total miscasting. The people responsible for casting should have picked up the book and read it. This had the possibility of being a film series on par with Harry Potter but it was cast for Hollywood not for longevity.
24 people found this helpful
Report abuse

Blue DragonflyReviewed in the United States on October 31, 2018
5.0 out of 5 stars
Wonderful fun movie
Verified purchase
I rented this and decided to buy it because it is a great fantasy movie full of dragons, princesses and magic. The acting is great and the action and CGI is very good. I wish that they had made the sequels to this fun series. It is the story of a young farm boy who comes across a "rock" in the forest while hunting. It turns out that it is a dragon egg and he has been chosen to be the next "dragon rider" to help free the kingdom from an evil king (John Malkovich). His mentor is an ex-dragonrider who lost his dragon in the wars (Jeremy Irons) who teaches him what it means to be a dragon rider. Cast includes Djimon Housou as the rebel leader. Great ending. The film is adapted from the book by Christopher Paolini and was one of the best selling fantasy series of all time.
10 people found this helpful
Report abuse

ShawnReviewed in the United States on June 25, 2018
2.0 out of 5 stars
If you read the books DO NOT WATCH!
Verified purchase
If you have read the books you will hate this movie as it leaves out many important aspects and relationships in the story. As is with a lot of movies, it can not have everything the book has; however, this movie completely strays away from the story and important relationship developments as well as important figures.

If you have never read the books you may be enterained, however, you will also be left confused as so many things happen with no explanation. If you just want something to watch with no expectation of a deep understanding of whats going on you may like this movie. If you are someone who enjoys development of characters and relationships between different characters (not meaning romantic) you will not enjoy this movie.

JasmineReviewed in the United States on September 17, 2016
1.0 out of 5 stars
An extended nightmare
Verified purchase
If you thought the extended version would be better and more accurate like I did, unfortunately we are both wrong. I decided to give the move another chance and boy did it dissapoint. The majority of the characterizations are off, Saphiras 4 second magical puberty it's still just as cringe worthy. Arya is so wrong I could cry. Angela too. Also the whole Varden stuff seems like it was thrown together at the last second. Everything I loved about Eragon is missing basically. Saphira is supposed to have bat like wings for christssake how hard is it to just read the actual book and make the movie correctly? Basically I just wasted an hour and a half of my life again on this s***e.
29 people found this helpful
Report abuse

Bob FarrellReviewed in the United States on February 25, 2018
4.0 out of 5 stars
Not the book, but a good flick
Verified purchase
Like so many book to movie attempts, this one tries to fit 2,000 pages of novel in 1 hour and 43 minutes and of course fails, but maybe not epically. I wouldn't go all the way to loving the Eragon books, but I did really like them. There is so much depth missing in the movie that I had a hard time liking it, but I imagine that someone that hadn't read the books would like it, even love it. A shallow adventure with exceptional special effects ... and a dragon. You really can't go wrong, especially if you have a bucket of popcorn within arms' reach.
9 people found this helpful
Report abuse

Avg JoeReviewed in the United States on January 19, 2021
2.0 out of 5 stars
Waste of fine actors and poor CGI
Verified purchase
This was a waste of the talents of Jeromy Irons, John Malcovitch and others - all putting in a fine performance on the script of this very poorly plotted story.

Clueless farmboy with no combat skill save a minor one with bow and less common sense - becomes hero in a land of wizards that launch fire and teleport and consort with demons. Good matchup.... very credible.

Basically average joe with extreme plot armor anointed by prophecy to save the day.
Tedious formula used by so many bad movies.
How about a credible background for the hero to explain actual skills?

So dragon grows up .... from an egg....in about a month or two from the looks of things as its well established that there's No way he can hide the dragon as everyone is looking for it at the hatching.... because people just KNOW it hatched. And in that week or two it establishes language skills and the experience of a 30 year old woman - who he can hear in his mind.... and it gives him sage advice at the ripe old age of 0.2 years old.

Half way through the movie, he remains clueless, wishing to run into battle against veteran king's men because his abilities as an average farmer/occasional hunter have honed him into a fighting machine.... that and playing with sticks with his..... equally untrained.... brother.

I.... just couldn't take it any more about 2/3 in and had to stop watching. The discussions with is 2 month old/30 year old woman dragon.... were beyond cringe worthy and my face was tightening up every time he offered to do battle with anything with greater experience that a kid with a stick.... which was nearly every other character.

Intelligent....no. Experienced....no. Skilled....no.
Everyone else is more capable .... but prophecy.... well..... the evil Sorceror/Dragon Rider King and his Court mage, army and assasins are in trouble now....

Then the question... if the dragon is a genious (clearly) and he isn't (clearly) and it can breathe fire and he can just about use a bow... against deer and such..... why does the dragon need a rider?
If its got the mental capacity of a 30 year old woman.... why not take a more experienced rider (like the former dragon rider who would at least know how to fight from its back... (whatever that means).

The script departed from the popular books - don't know them.. but expect the dragon didn't grow up in 2 months because the plot needed it to. So the horse whipping should be reserved for the screen writer alone.

Note that the director who did a fine job with fine actors with this drivel. (I can only imagine John Malcovitch repeating "remember the paycheck" over and over during production to keep from laughing at the lines he was delivering.

Don't know how this mess got 4.5 stars. Apparently some screenings may have come with complimentary halucinogens.

NicolausReviewed in the United States on January 13, 2015
2.0 out of 5 stars
Disgrace to Paolini's masterpiece
Verified purchase
LOL, must I say anything? Well, in case if there are actually still people who look for reviews in this movie, let me start off by saying, me and my good friends that have actually read the Inheritance Cycle (the first book being Eragon) watch this just to make fun of it... and how literally the only thing similar are the names (although sometimes on the wrong people, like how they called bug-piles the Ra'Zac). But yes, there is a reason I put it as 2 stars not 1 like it deserves. And this reason is that I watched this BEFORE I read the books, and I loved it. So if you're one of those sad people who don't read books, then yes, get this movie. But it is a disgrace to Paolini's masterpiece, and I've never met anyone who disagrees.
23 people found this helpful
Report abuse
See all reviews
Back to top
Get to Know Us
Make Money with Us
Amazon Payment Products
Let Us Help You
EnglishChoose a language for shopping. United StatesChoose a country/region for shopping.
© 1996-2021, Amazon.com, Inc. or its affiliates