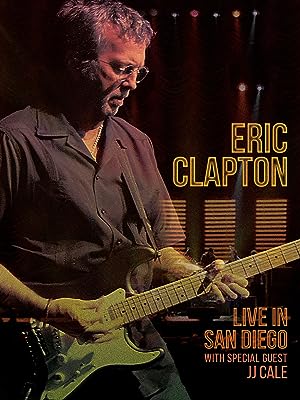 (563)
1 h 56 min2017PG
"Live in San Diego" documents a very special Eric Clapton show from his 2007 world tour. For the only time during the tour, Clapton is joined on stage by legendary musician, JJ Cale. The two friends perform five JJ Cale songs - including "After Midnight" and "Cocaine". This almost 2 hour concert also includes Clapton classics "Layla," "Wonderful Tonight," "Tell the Truth," and "Crossroads" - which

John C. PrestonReviewed in the United States on April 3, 2017
5.0 out of 5 stars
AN HISTORIC CONCERT THAT LIVES ON.
Verified purchase
I disagree with those giving this show less than 5 stars. I was at the concert and find the DVD and CD both capture the sound and feel of the show. Eric Clapton played San Diego a number of times in his long career. He was a very close friend of JJ Cale, who lived in Valley Center, which is a community in northern San Diego County. JJ was a bit of a recluse in his later years, but he agreed to appear with Eric Clapton and do a few of his songs that he and Eric loved to play. This was a very special event for Eric Clapton and JJ Cale. The warmth between them shows in the music and video and was sincerely felt by those of us lucky enough to be at the concert. The venue was also somewhat special in that the old San Diego Sports Arena has seen the likes of Hendrix, Led Zep, the Rolling Stones, the Who, CSNY, and so many other classic acts over it's decades of life. As far as the camera work goes, I agree that the use of multiple cameras, including audience cameras, does create quite a variety of constantly-changing views. The effect is much like that of many bootleg concert films that are the collection of audience cameras smuggled into the venue and then later edited together. Perhaps the objective was to mimic that effect. At any rate, the video does in many ways simulate the experience of being at the show, where one is constantly bombarded with sensory input, including the music, the lights, the musicians and the audience (the audience can be especially annoying, at least to me). At any rate, I found the DVD and the CD to be accurate reproductions of the experience of attending this historic concert, which I highly value in my 40+ years of attending concerts.
24 people found this helpful

Thomas KeaneReviewed in the United States on April 24, 2017
5.0 out of 5 stars
A Great Show With JJ Cale As A Bonus
Verified purchase
I saw Eric twice on this tour, once in Wash. DC and the other time in Columbus. Before the Columbus show, Derek Trucks left to rejoin The Allman Brothers and the difference was noticeable. I was very happy that this concert happened while he was still part of the group. I have seen Eric a few times since this tour and feel that this group of musicians is his strongest lineup. Doyle and Derek are great players and add considerably to the sound. This is especially true on Layla where Derek provides a beautiful slide version of Duane Allman's original creation. I do not recall another Clapton DVD where this slide portion happens, except maybe with Mark Knoeffler, but it may have been the acoustic version of Layla similar to Unplugged. Basically this is a Clapton concert where, instead of the middle sit down acoustic portion, he is joined by JJ Cale to play a few of his songs. I thought the JJ Cale songs were excellent. Highlights for me were Got To Get Better In A Little While, Little Queen Of Spades and Layla. In fairness, Willie Weeks bass could be more pronounced, but I found the audio and video to be very good. As a side note, Little Wing is not on the DVD, but is on the CD. Why would they leave that one off?
13 people found this helpful

GTRJUNKIEReviewed in the United States on June 14, 2017
4.0 out of 5 stars
Very Good
Verified purchase
Very good show from 2007. Eric has Derek Trucks and Doyle Bramhall II in his band, so the guitar work is top notch. J.J. Cale joins the band on stage for 5 songs. I do wish they would have done Call Me The Breeze though. Robert Cray joins the band for the final song and does the lead vocals. The only reason I didn't give it 5 stars is that it reminded me way too much of the crossroads festivals, which I love, but felt like it was too similar. A few tunes do drag on, like 10+ minutes or so. Eric's playing is excellent and his band is amazing. Fans should not hesitate to pick this one up.
3 people found this helpful

B. WardReviewed in the United States on April 16, 2017
4.0 out of 5 stars
Great music, but video composition lacking
Verified purchase
Really good to hear these talented musicians together. I thought the audio was very good, but couldn't understand why some of the video shows were so poorly composed. Fretboard shots were quite bad in my opinion. Poorly focused at first, and then once focused, too short to appreciate. Maybe it is just me.
5 people found this helpful

The only negative I could find is the fast changing video perspective, through the use of multiple cameras from a number of vantage points - some are audience cameras. This is not unlike experiencing it live & looking around at the entire venue. Other than some mildly annoying audience visuals, This is one of my favorite EC concerts & I recommend it.

SalguodReviewed in the United States on May 11, 2019
5.0 out of 5 stars
I’m so glad
Verified purchase
This is one of the absolute best DVDs of a rock concert ever produced. Recorded when Clapton was on tour with Derek Trucks and Doyle Bramhall II we’re backing him in addition to Chris Staton et al. They were on top of their game this day and then here comes J.J. Cale to join them. There is not a weak moment. Yes the songs have all been done so many times but never better.

mr. oysterheadReviewed in the United States on March 11, 2017
5.0 out of 5 stars
Awesome. EC has never sounded better
Verified purchase
Awesome. EC has never sounded better. Got To Get Better In a Little While alone is worth the cost of this one. Derek Trucks, Doyle Bramhall, Steve Jordan, JJ Cale, and yes, even Robert Cray for one how can you go wrong.
4 people found this helpful
See all reviews
Back to top
Get to Know Us
Make Money with Us
Amazon Payment Products
Let Us Help You
EnglishChoose a language for shopping. United StatesChoose a country/region for shopping.
© 1996-2021, Amazon.com, Inc. or its affiliates